This bundle is marked as approved. It works and satisfies the submission rules.
View usage Statistics Legacy download
Reactions: Neutral08, Curunir_88, Deolrin and 7 others

About
Play as the dark elves of Drottomar, a mystical race from my fantasy world.

The Shadow Covenant is a faction of religious dark elves who worship a pantheon of four Dark Divines.

Features
Their tech-tree is divided into four Cults.
Each Cult has its own set of units, technology and perks.

The player can produce a third racial resource called Faith,
which can be invested into one of these cults.

Faith is also spent on Divine Favor mechanic,
Which grants you access to powerful global spells at the cost of Faith.

Investing faith into one of four Cults increases favor with one of four elven deities.
This allows you to utilize the Divine Favor mechanic,
which lets you use powerful global abilities at the cost of Faith.

Dark elves have no regular shops.
Instead, they rely on talented Artisans to craft items for their heroes.
They also harvest a bit more lumber than usual.

Instead of upgrading their main building, the Shadow Covenant performs a
Ritual of Evocation to reach the next technology tier.
Their main building can still function while this is happening,
It can produce workers, attack and cast spells.

Dark elf main building - Nexus - can be linked to other Nexuses via a
Teleportation link, which allows you to teleport your units between bases.

Dark elves can initiate summoning rituals at Shrines and Nexuses.
This grants them a unique way of training additional units:
Imps are summoned at Shrines and spawn in pairs,
Incubi can be warped-in almost anywhere on the map,
etc.

Some units can be upgraded from one unit type to another.
Some promotions are meant to give you a smoother transition to later game,
Other promotions serve as the only way to acquire certain units,
And others are just straight up upgrades.

A lot of units share common passive abilities with each other.
These include Armor of Dread for Dread units, Manaburn for Demon units,
Shadow Strike for Shadow units, Baneful Poison and Spider Venom for Spider units,
etc.


Cult of Dread
Followers of the Nightmare God, Xalanar,
are menacing warriors who inflict terror in the hearts of all who oppose them.

Warriors of the Cult of Dread use fear as a weapon.
They strike fear into the hearts of their enemies,
enfeebling them and causing them to flee in terror.

Like all dark elves, members of the Cult of Dread strive for excellence in everything they do.
They strive to have the most powerful weapons and armor,
and spend most of their lifetimes perfecting their skills in combat.

Cult of Darkness
Devotees of the Goddess of Darkness, Setta,
are powerful spellcasters who can cast an array of devastating spells and summon demons into battle.

They provide magical support for other units and can unleash
tremendous amounts of magical damage upon their enemies.

Adepts of the Cult of Darkness use their daemonic familiars in battle.
Instead of being trained like other units, Daemons are summoned via rituals.
They feed on magic and can easily decimate enemy spellcasters.

Like all dark elves, members of the Cult of Darkness strive to be the best at what they do.
This includes the magical arts - Dark elf skills in the arcane are unparalleled.

Cult of Shadows
Worshipers of the Abyssal Lord, Du’ragh,
are agile and dexterous assassins who excel at swift combat and assassination.

They also possess great mobility and are able to pass though the shadow realm,
allowing them to become invisible and quickly maneuver around the battlefield.

Assassins of the Cult of Shadows can shift in and out of the shadow realm.
This allows them to become invisible at will and maneuver around the battlefield unseen.

Members of the Cult of Shadows possess great mobility,
which allows them to excel at skirmishes, harassment and hit-and-run tactics.

Cult of Spider
Children of the Spider God, Ra’Gath,
are monstrous arachnids who are worshiped by some dark elves as sacred beasts.

This cult provides access to various specialized units, each possessing their own
unique abilities and providing access to new strategies.

Ra'Gathian spiders can easily outnumber any foe.
Their swarms ravage through the battlefield, leaving devastation in their wake.

While most of the arachnids used by the Cult of Spider do not boast much strength,
Their poison can severely weaken any foe before delivering the final blow.

Unique Techtree
The Cults make the Shadow Covenant's tech-tree progression unique.
Instead of having a usual linear tech-tree,
they have a fluid non-linear one which resembles a Talent tree.

Your choice of cults defines your starting units, your advanced technologies,
and what unit will be your ultimate end-game option.

Variety and Replayability
A major feature of the race is how much playable content it packs.
You might need to play it a couple of times in order to experience it in its entirety.

The race might also be taxing on your micro-control.

Vulnerability
Any damage done to your buildings or workers can easily cripple you and your power growth.
3 out of 4 cults lack early base defenses besides their Shrines and Nexuses.

Power Growth
In addition to having high early game potential, the race growths more powerful as the game progresses.
Every new upgrade or unlocked technology is meant to give you an incredible sense of growth in power.

OP
The race has been made intentionally overpowered upon its release.
Certain features and abilities are more powerful than they are meant to be. 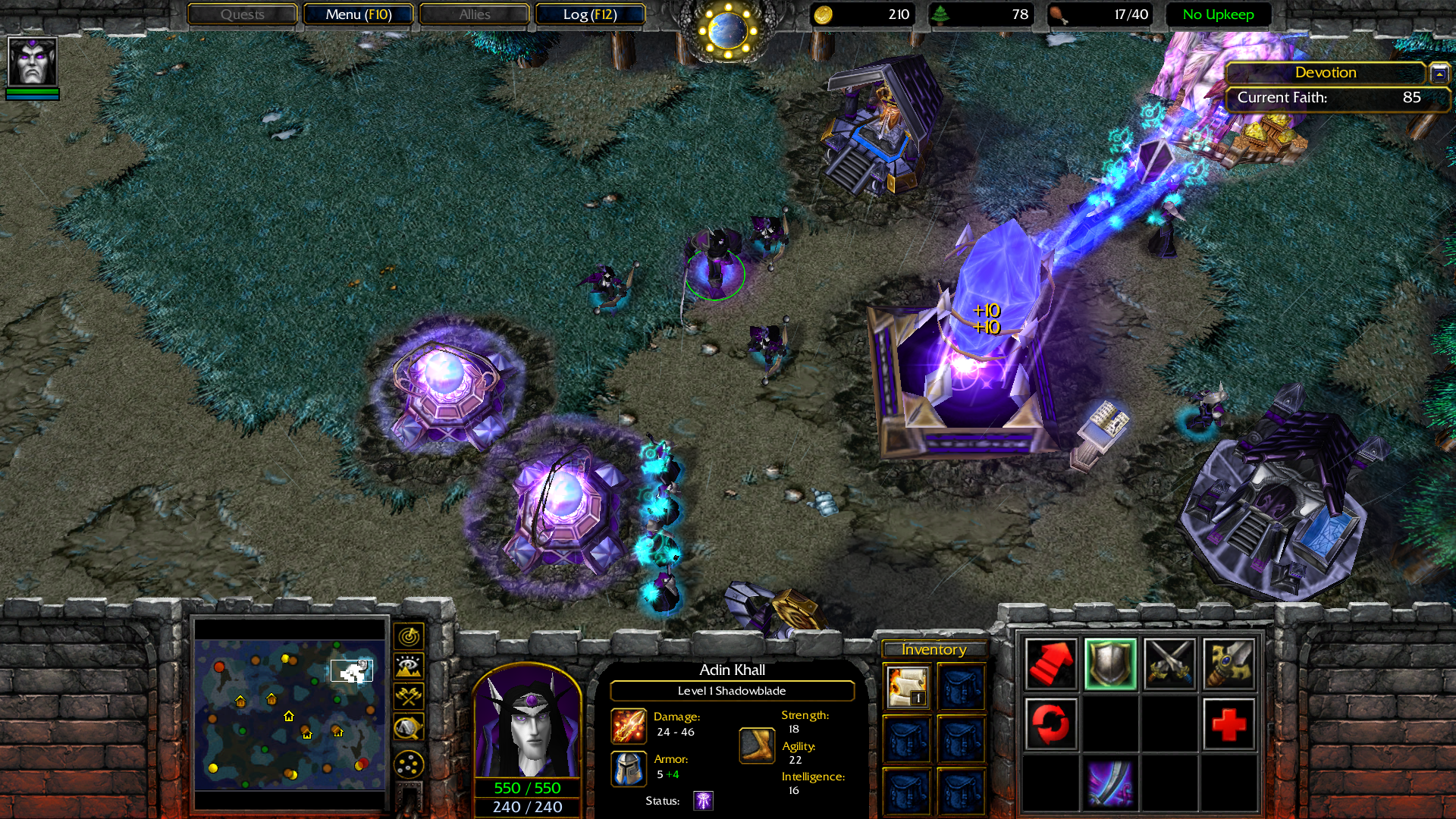 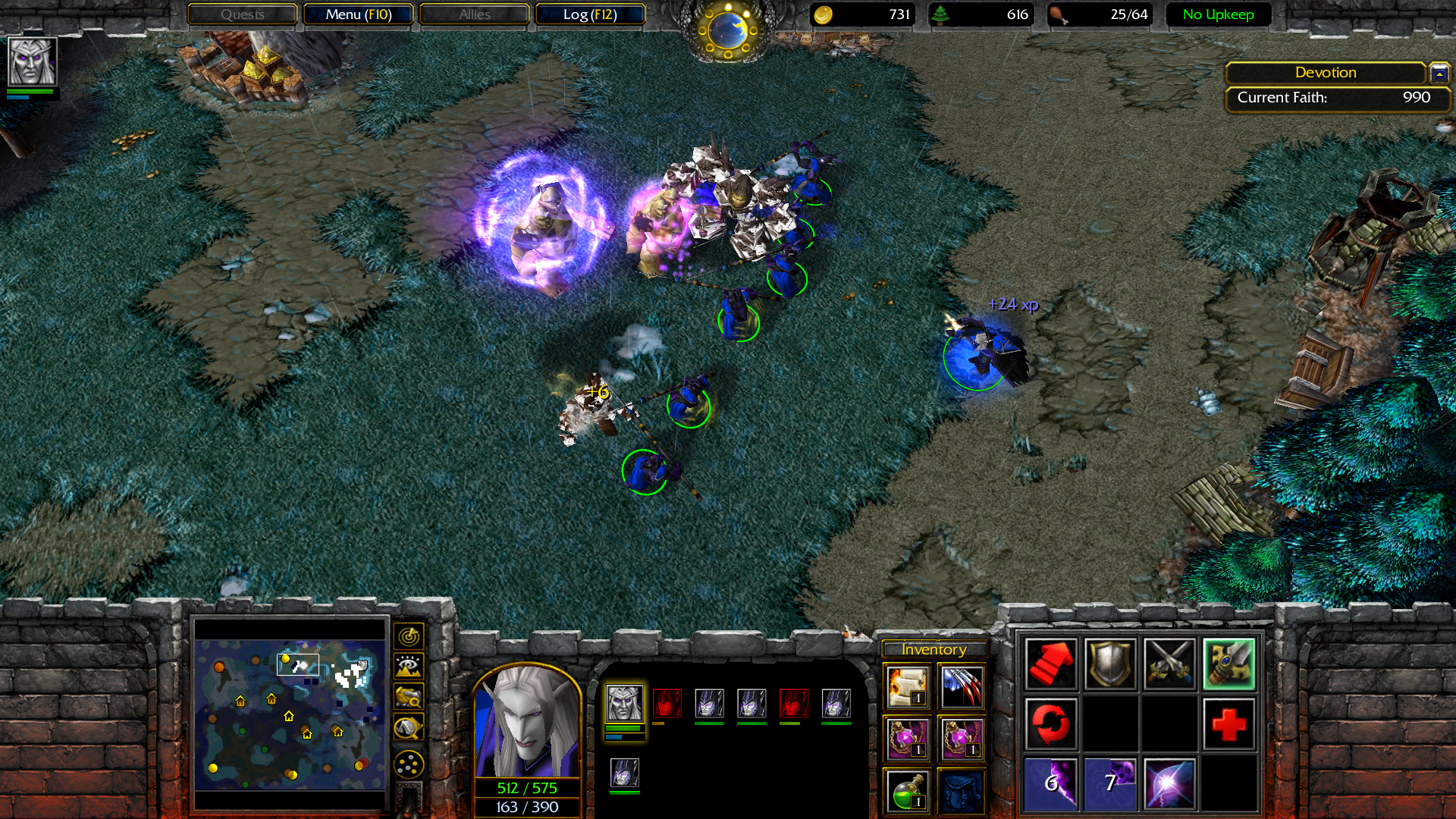 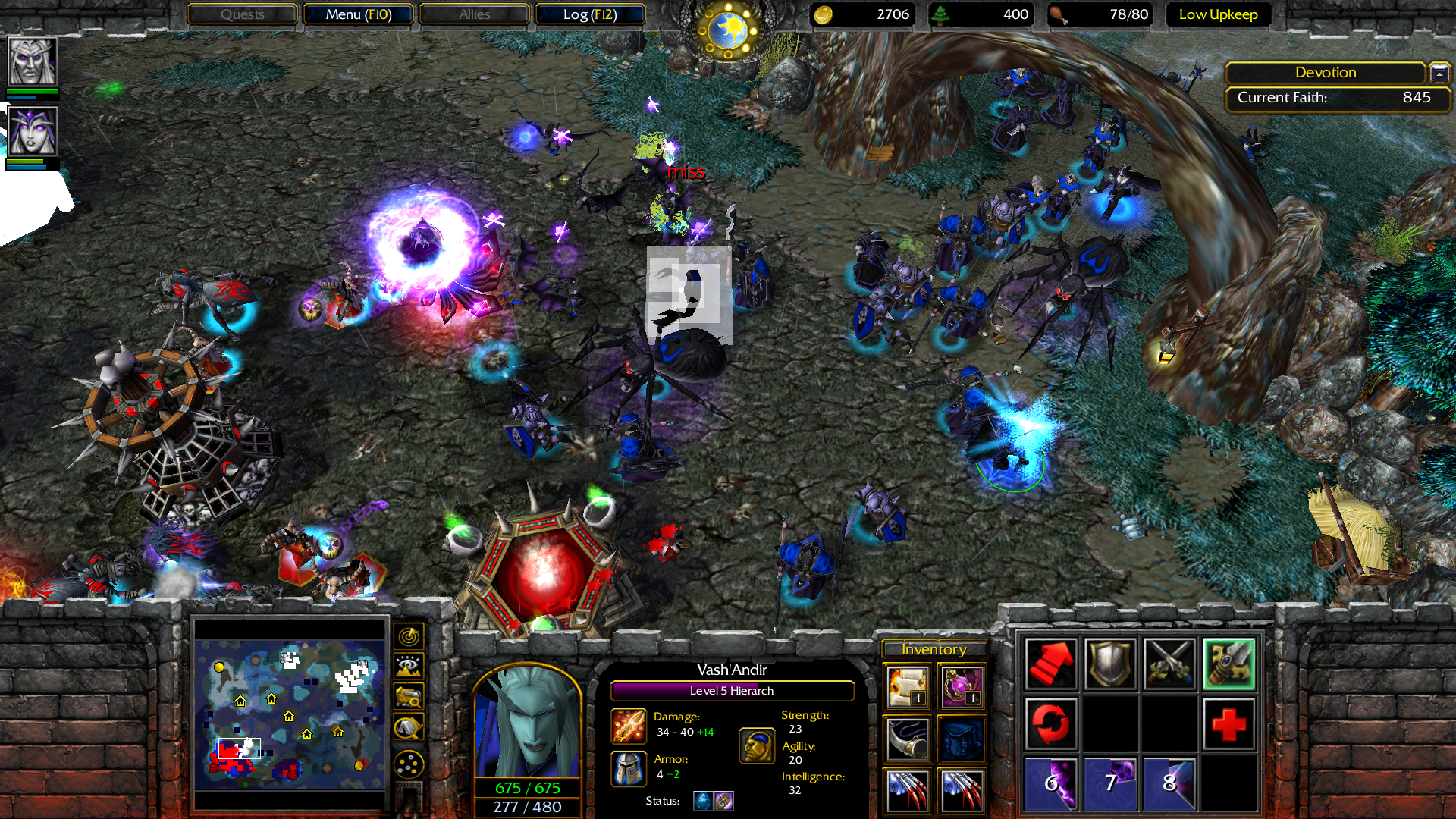 Inspiration:
-Nightmare2077 and his Warhammer: Eternal Strife project have been a great inspiration to me.
-A lot of inspiration also comes from the Heroes of Might and Magic, Spellforce, Warhammer Fantasy, and Warlords Battlecry.

Systems:
-Everything in this map functions only because of Bribe's damage engine and unit indexer.


Author's Notes
I poured my heart and soul into this project.
There has been a lot of thoughts put into it.

I started working on this race on the exact day the contest was announced.
I've been developing and perfecting it every day since.
I've enjoyed every second of those countless hours spent on this project.

Thanks to the Hiveworkshop for the amazing contest.

The reason might be the fact that I used the old Bribe's damage engine on a 1.32+ patch.

-When a Shrine is destroyed, all Disciples who have been praying at it will still play the animation.
-Some tooltips might be slightly inconsistent.
-Some minor leaks are possible.

-Fixed a bug that prevented Dark Priestess hero from using her W.

Actually, really impressive work. Too bad I don't have the latest version of the game to test your race.

From the pictures so far, and all the details given, I'm looking forward to judging this in the contest. Very nice presentation so far

Looks good, wish you would make a map based on it, just the altered melee race is kinda out of place facing vanilla races.

fantocan said:
Looks good, wish you would make a map based on it, just the altered melee race is kinda out of place facing vanilla races.
Click to expand...

Despite being made for the contest, the race has always been intended to be a part of a bigger project
The Fading World | HIVE

xISLx said:
Despite being made for the contest, the race has always been intended to be a part of a bigger project
The Fading World | HIVE
Click to expand...

Nice, looking forward to it. Love Dark Elves in most lores, yours look dope.

Maps 4
Approved based on Techtree Contest #16 - Results
You must log in or register to reply here.