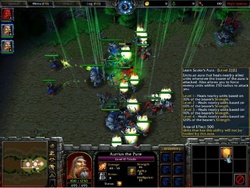 Hi, this is my first spell and is also my entry for the Zephyr Contest #11. The poll is up so i think its ok to upload it in this section. The spell is very simple i hope its approvable.

Tooltip
Emits an aura that heals nearby allied units whenever the bearer of the aura is attacked. Also allows you to force enemy units within 250 radius to attack you.

Area of Effect: 500
Units that has this ability will not be healed by this aura.