Summary:
A kingdom is being overrun by bandits and corrupted anarchists. You must take the lead of either one of the 3 warring(or allied) corrupted groups, or one of the three branches of the kingdom.


Ok, so I got the inspiration from playing Star Wars: Empire at War: Forces of Corruption. There is going to be a kingdom divided into 3 parts. A player can either take over a part, and command it, OR a nifty AI will be in charge (the AI is a reach for me right now). There will also be three factions of "corrupted" units, with a custom tech tree, and units. Again, each will either be played by a player, or have a nifty AI.


Both sides have unique ways of gathering resources which will be needed to create the armies and units to lead their side to victory.

The Kingdom's sections, a fishing village (gold) and a lumber camp (lumber) can either spend their resources or spread them to the rest of the team. (Highly recommended) The third group, the main city, will have to rely on the other parts for income. The village and camp will not have the same capabilities as the capital to generate a formidable force, so teamwork is needed.

The three corrupted groups however, will only gain money through pillaging, stealing, or controlling the village or camp. Gold and Lumber will also be available for very high trading costs, and through kingdom defects.


The citizens of each respective "section", whether it be a corrupted base, the lumber camp, etc... will abide by whichever side lays claim to that area. Each area can be captured by military force. This can be done by raising an army with money, or with the moral/defect system.(more on that later)


Each area is given a percentage of the total population. There are 14 areas, the Capital, Lumber Camp, Fishing Village, The Citadel, The Village, Farm 6x, and Corrupted Camp 3x. As your side captures an area, you gain that percentage of the population, and the old owner loses it. Whenever a side has more than 50% of the population, a timer will start. This side must hold a higher than 50% for the time to win. If the side loses its 50%+, then the timer stops WHERE IT IS. Each side will start with a time, and that time will never go up, only down.


The three kingdom factions will always be on the same team, but the corrupted forces will choose at the beginning of the game if they are all together, or all separate. There %'s will add together if on a team, or be separate if separate.


Based off of the upkeep system, there will be a Moral system. As you either get more units, or the enemy uses certain abilities your moral will worsen. The worse your moral the higher the chance a random unit will defect to the other side, changing sides on the spot, and bringing money with it.


My attempt at a kewl screenshot: 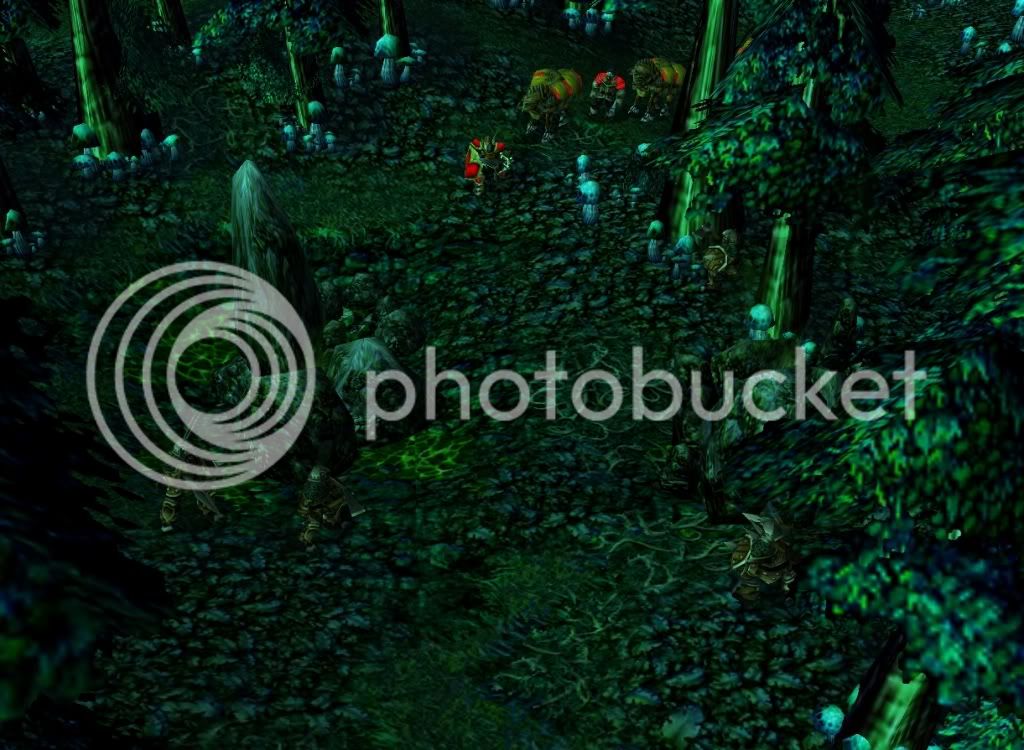 Spells:
*Units- All units made have working spells/abilities.
*Heroes- None yet, will do with heroes.

AI:
*All- This is still just a hopeful idea, nothing has been started yet.

You know something
I'm happy i made the map your useing for this game
Just send me the map once u get some of the units triggers and spells done so i can test it out and finish the terrain for you
Quick note: Take out the camera Triggers i added into the map so you could look at the map in different angles

Spells 1
Not gonna lie this sounds so AWESOME. I cannot wait till its doen so I can play it. Keep up the good work.


was trying to think of something unique, while this is a little bit towards EotA, i think it is fairly different..

Icons 7 Maps 3 Tutorials 2
Looks interesting enough. Glad to see how far along you are on the terrain.

Tools 1
BIG updates, alpha might be out b4 expected

Tools 1
slight change in plans, so will be delayed for alpha, but is coming out great, will test this weekend, then release to you guys sunday or monday.
You must log in or register to reply here.

Age of Empires: Age of Kingdoms (Name is a WIP)