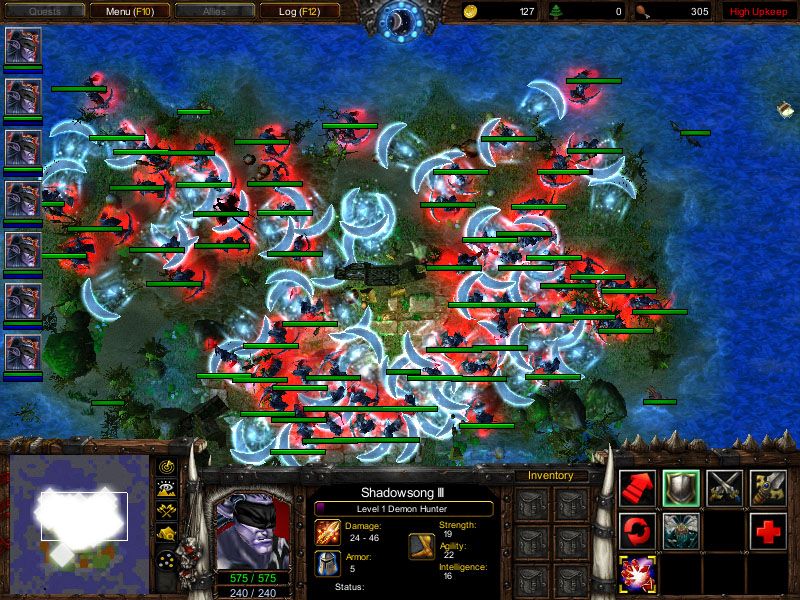 Description
Sends out a powerful wave of spiritual energy in the shape of a crescent moon. When the wave collides with an enemy unit, it pulls the unit along with it.

2.5 - 3.0
1. Reverted how damage impact increases
2. Changed duration to depend on time. Time is easier to use than distance and will aid with implementing a new feature. Readded distance as a limit. Time is now a function of distance and speed. More on the new feature later.
3. Changed spell icon.
4. Fixed issues with knockback group.
5. Added more configurables.
6. Implemented other suggestions. Thanks to all who commented.

Map Info View Resources In Use Preview Triggers Download
Reviews
Piercer of Heaven 4.5 | Reviewed by BPower | 13.06.2015 Concept[/COLOR]] Shoots a missle towards the target cast point. Damaged units will get stunned and dragged along with the missile. Damage and speed increases over the fly duration. It's...
Read full review...

Models 1 Icons 2 Packs 1 Tools 2 Maps 20 Spells 31 Reforged HD Icons 1 Tutorials 5
You should delete this line :
Since it's not related to the spell directly and users don't want their screen filled with this.

Only one of these can be applied :
I suggest delete the first one and set the below one to 0.03125, nothing much except 1.33 operation difference, which is not a big deal. But you really need to choose only one, as the second always override the first one.

Great spell, and I see the name is taken from Bleach Anime (Getsuga Tenshou aka Heaven's Piercer/Piercer of Heaven).

Also, I really appreciate that you used my TreeKiller ^^ thanks

Tools 1 Maps 3 Spells 11 Templates 1 JASS 6 Tutorials 5
There is a corrupted custom script in loop. (at least for me)
I can't compile the code correctly. I would appreciate if someone else tests it to compile.

You don't index properly. Increase the counter in begining, not in the end.
In case of a deindex it might mix up at the moment.
-> not MUI.

Why do you count knock back instances? Also, when one instance ends you remove
all units from knock back group and decrease counter. That's illogical.
-> not MUI.

Your "Some functions" library provides two functions witha common name.
They may get in conflict with functions by user. It needs to be changed.

Tools 1 Maps 3 Spells 11 Templates 1 JASS 6 Tutorials 5
If dummy is out of bounds no further actions should be executed.
The only next thing to happen is deindexing.

Using a global knockback group for all instances is no best solution.
You remove all units in range at deindexing from the knockback group
-> if unit is affected by 2 knock backs it will bug.

Why you don't stun if you detect that picked unit is not in knockback group yet?

^Do not hardcode. Put the unit type into a configurable variable.
Flying height should be configurable.

If caster is not in game anymore spell should end on next interval, as the caster is the unit that will deal damage.

I recommend you to put a distance limitation over the time limitation.
If you won't anyway you could make it depending on level of ability.

Tools 1 Maps 3 Spells 11 Templates 1 JASS 6 Tutorials 5
"Skip remaining actions" is not a good action to use in loops, because it will ignore all further instances.
Could be completly avoided with structering with help of then/else of an if-statement.

Directly check with the duration if caster is dead/alive. And then you can directly deindex.
So you would not need an extra if-statement in your "Then" action part.

^This calculation is not correct, because your speed increases. It isn't constant.
Also the speed and inc_speed is level depending, so you would need to re-calculate it anyways.

The knockback doesn't work. Following check is faulty, when you pick units in range:
If you want to stun only units that are in range then only stun consequently units in range for next period. Don't stun over whole spell duration:
Why even +10?
Also if you only would stun until next period, then you don't need to "unstun" all units on deindex.
"unstun" all units on deindex is wrong, as it you don't know what happened. Just no new stun should be applied.
So you should stun units when they comes in range first time with missle, but also continiosly when knocking back. But only until next period.

Spells 2
@IcemanBo: I will address all your points except

^This calculation is not correct, because your speed increases. It isn't constant.
Also the speed and inc_speed is level depending, so you would need to re-calculate it anyways.
Click to expand...

I have already resolved this with the following line in the loop.
I plan to either remove that time variable and calculate the time at cast or keep it to allow users to choose between time only or both.

Tools 1 Maps 3 Spells 11 Templates 1 JASS 6 Tutorials 5
^I personaly don't see much sense having this in config.
But you can let it, if you think it's senseful.

Groups with index 0 and 1 already exist in a GUI group array.
You leak them onInit when you create a new group and overwrite the variable.

Please note if values are depending onInterval. (config)

TestMap works not very fluent for me because you overloaded the demo with heroes that cast.
Sometimes less is more.

Spells 2
Having that option really is senseless, since I have two other variables that would become fodder if that boolean was set to false.

If I were to check whether groups are null, the spell refuses to work properly, i.e. targets are hit multiple times and become immune to knockback.
Last edited: May 19, 2015

Having that option really is senseless
Click to expand...

What do you mean?

If I were to check whether groups are null, the spell refuses to work properly, i.e. targets are hit multiple times and become immune to knockback.
Click to expand...

You had a solution, but you created unit groups before so you leaked again. Does it work now correctly though?

IcemanBo said:
What do you mean?


You had a solution, but you created unit groups before so you leaked again. Does it work now correctly though?
Click to expand...

Yes, the spell works correctly as long as I do not check whether groups are null.
Don't worry about the unit group leaks as I seldom get 1 assigned to the custom value of a missile in my tests.

How would separating the knockback movement into its own loop sound?
Last edited: May 19, 2015

Tools 1 Maps 3 Spells 11 Templates 1 JASS 6 Tutorials 5
The spell is based on an AoE spell, but should be based on an other spell like shockwave for example,
as it's effect does't affect units in an area, but makes a straight shot in wanted direction.

Don't worry about the unit group leaks as I seldom get 1 assigned to the custom value of a missile in my tests.
Click to expand...

It's just good practice if we exclude memory leaks in our approved submissions,
even it won't happen too often or is not really critical.

How would separating the knockback movement into its own loop sound?
Click to expand...

You have problems with it atm?

Spells 17 JASS 5 Tutorials 1
A nice demo map is very welcome, but too many not required resources are
not helpful for users who just want to import what they need for the spell.

Add just what is really required for Piercer of Heaven and a minimum of demo code.

Models 1 Icons 2 Packs 1 Tools 2 Maps 20 Spells 31 Reforged HD Icons 1 Tutorials 5
Seeing the critical issue is pointed at the flaw of my system, I decided to shed some help :
Instead of running the pick in each loop, insert an ITE and place the destructable loop in the THEN block, then add if GT_DestroyTrees == true on the condition. This effectively eliminates the loop of destructable.

My deepest apologies for the very slow recommendation.

Models 1 Icons 2 Packs 1 Tools 2 Maps 20 Spells 31 Reforged HD Icons 1 Tutorials 5
Seeing this having nothing happening after 5 years, it felt like I am at fault for the whole reason it is not approved yet.

The solution related to the requirement given by @BPower 5 years ago... now that I re-read it:
To fix the issue, the solution is to pass the GT check for trees before the destructible loop:
Actually, even without this fix, the spell is working correctly, and TreeKiller won't destroy trees if GT_DestroyTrees is set to false (and if it does, that is my systems' problem, and should be held accountable to me as the provider). Indeed the loop will run, but the checker will block the tree-killing from taking effect in situations it is set to False.
@KILLCIDE @PurgeandFire @MyPad
You must log in or register to reply here.