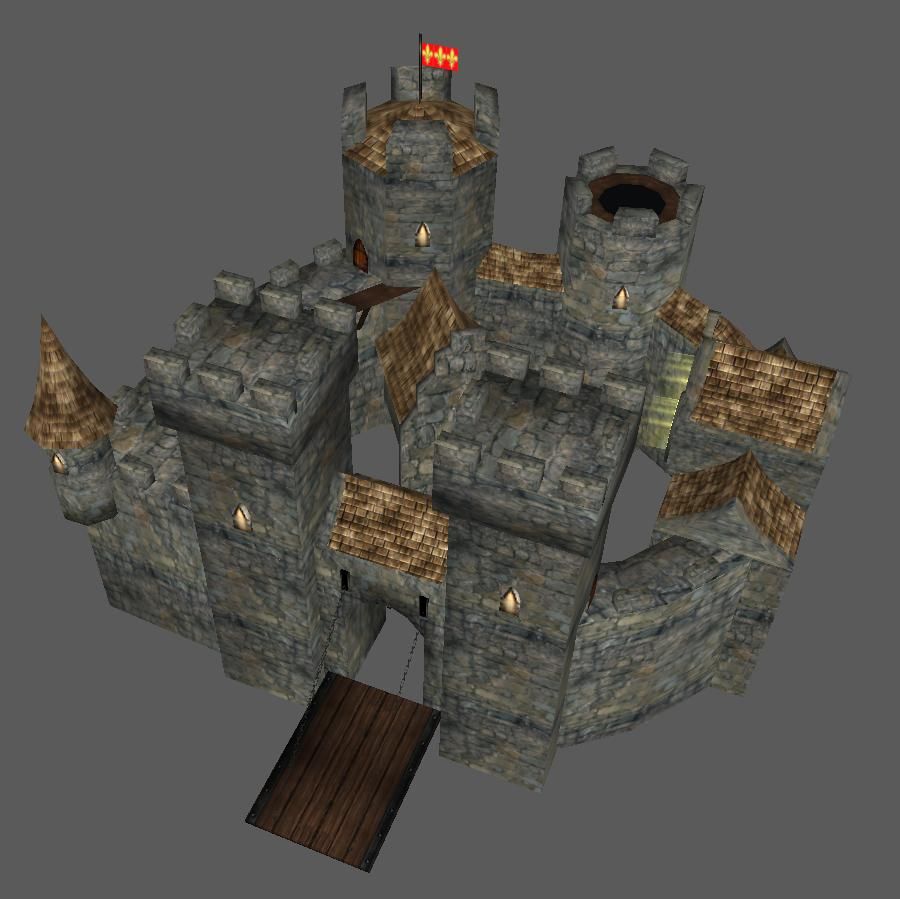 This bundle is marked as approved. It works and satisfies the submission rules.
View usage Statistics
Reactions: Trillium, Ujimasa Hojo, morbent and 7 others
Medieval European castle. I use three custom textures (for stone, stainglass and roof). The flag is teamcolored. The towers are destroyed at death animation. The roof of the cathedral burned (The animation of dead is long, so increase the death time in object editor). The gate and the bridge are opened during some animations. Use this model in your historical maps) Animation of death is based on Massive Master idea. Special thanks for him.

New changes: More granularity death of donjon tower, added charred beams instead of the roof. The internal house and gatehouse are now burns too. Added shading on textures. Added rays, death of the gate. Added the more detailed gate. Removed the death fire from decay anim. Added chain for drawbridge.

How to import this model View in 3D Sanity check More info
Reviews
18:08, 12th Nov 2014 MiniMage: It's a neat fantasy castle. The filesize is a little much though. I'd also argue that the death animation needs more work, it feels like a slowed down domino effect when each tower drops one by one. It would be better...
Read full review...

18:08, 12th Nov 2014
MiniMage: It's a neat fantasy castle. The filesize is a little much though. I'd also argue that the death animation needs more work, it feels like a slowed down domino effect when each tower drops one by one. It would be better if they dropped close or simultaniously, walls being damaged and as they land a dust cloud could be spawned and a rubble alternative stand replaces the parts that wasn't visible in the cloud. Right now it kinda looks like someone is lopping off the tops with a large invisible sword.

So summarized, work on the death animation, oh and the channel animations, change those to morph and make a stand alternate, the ruined version can be a stand upgrade. When that is done, lower the file size. Nice work though, with these fixes done, I'll most likely rank it a 4/5 out of sheer usefulness. ;D

19:29, 1st Dec 2014
MiniMage: Apologies for the delay. The model looks neat. I would suggest you add a morph alternate animation so that you can close and open the gate.

Models 81 Icons 17 Spells 3
Mike T.T teach me how to make Epic Building like this T.T

Models 147 Icons 1 Packs 4 Skins 2 Maps 1 Spells 3 Tutorials 1
I understand how you wanted to use the same tiling texture for all stone parts, but i would have appreciated if you tried to incorporate some shading into it. Right now, the texture is really, really flat. If you think adding shading to the rock texture would require you to increase its size, it is instead still possible to simulate shading by adding some polygons using an additive material with the ingame gradiented black/white texture in it. Places which really need shading right now are the floors in the towers, and under the crowns of the towers. Making a new texture with shaded parts would be even better though. The model itself is good.

EDIT: And by the way, i think the flag waving should be a global animation, if it isn't already. That way it will not look choppy in the transition between animations.

Models 11 Icons 129 Packs 5 Skins 4
Uhm.. this castle doesnt make much sense in current form, unless its going to be located on an isolated mountain-top.
There is a door at left of the gate to access the walls, but not at the right. Try increasing the height of the widehouse since rooftiles are easier to break than solidstone walls. You dont want this to fall that easily to a single ladderman, do you ?
Only the wide side wall has crenellations, you used wood inside to widen the walkable part of the wall, thats very risky during a siege.
Whats the purpose of the tiny tower that doesnt have any entrance and the smaller round tower along backwall ?
You have an nice idea just try more to flesh out it.

Models 147 Icons 1 Packs 4 Skins 2 Maps 1 Spells 3 Tutorials 1
Yes, it would be better if you could have some highlights on the outer edges and shadows on the inner edges. If you are clever at wrapping, you can do this without needing any more texture space.

Nice model And good use of "ingame textures"(sarcasm) but it doesn't really feel like it belongs in warcraft 3 as in it looks like it lacks the theme of the game still nonetheless good job 3.8/5

Models 32 Icons 3 Packs 1 Maps 5 Tutorials 1
Maybe these textures are just not fitting this building, not defined enough, from afar is hard to determine what it is

Models 81 Icons 17 Spells 3
maybe add a changelog? (If Have Changes)

Models 116 Icons 7 Maps 1
Each time, more and more convinced that I must tie with moddeling...

Models 81 Icons 17 Spells 3
100% Better... just that, I suggest you change Stand Work to Morph
For Stand Work, maybe Light Up the Window or Have some Firepit or something?

very neat indeed you should make other buildings with this skin.

Models 81 Icons 17 Spells 3
what i mean glowing window is for Stand Work
Instead of opening the gate for stand work ...would't it be weird every time you train a unit you open the Gate?

When you update I Hope you can Post Update! or something like that... or i don't know
wanna Keep Update my Information about this building extremely useful

btw, Morph animation if you have an alternate animation

Models 11 Icons 129 Packs 5 Skins 4
Everytime i see this it has changed texture, whats the deal ?

Models 26 Maps 1 User Interface 1
Hmm, I still don't get why all the pieces that fall to the sides and whatnot doesn't happen simultaneously.

Models 116 Icons 7 Maps 1
I have a version of this model where parts fall at the same time. But I can't tell that it is successful. It looks not so beautifully and is realistic, as destruction separately. Also, it increases the model weight as it is necessary to make still attachments in the form of dust. And each such attachment for some reason increases weight by the whole 7-10 kb(

Models 26 Maps 1 User Interface 1
Let me see that version. I don't actually mind a 7-10 kb increase as it currently looks like it had been cut by an anime character.