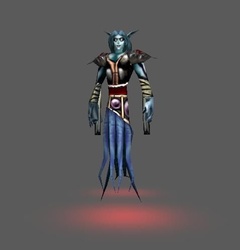 After the success of my Crypt Guard model, i decided to make another exotic unit, an undead caster, unlike anything the Hive had so far. At first, i used the Armies of Exigo's Matriarch unit as my concept, but during the course of its creation, it started differing more and more in some way from the concept. Instead of making many tentacles on the back and a Naga Siren like body, i made a load of tentacles instead of legs or a robe. I also intended to make it a unit at first, but then i found the Lich's anims be more suitable, so i also changed my mind in this point and made it a hero.


About the hero:
The Matriarchs are the princesses and highborns of the Doom Elves. Formerly, these were a tribe of Elves, a mix of Shadow and Highelves which later fall into the dark side, merged and hybridized with undead, Void, fallen and other eerie creatures. After this, they became the Doom Elves, the Elves that are doomed for what they did and became. Now they're an evil and revengive race, full of atroscious but skilled warriors and vile casters.
The Matriarchs are very cunning spellcaster, masters in the schools and techniques of Necromancy, Dark, Frost and Lightning witchcraft. They can rise skeletons and ghouls from all kinds of corpses, hit multiple enemies with chained or forked lightnings, immobilize enemies with frost spells, persuade enemy soldiers into changing the sides and also shade the sunlight or even cast an eclipse. During the eclipse, holy and light spells are reduced by one fourth of their effectiveness, enemy units have only half the site range than before and every enemy's damage is greatly reduced. Their Eclipse and other Dark Magic spells however have a serious drawback: they're completely ineffctive against Undead, Fallen and other Doom Elves. In the battle field, the Matriarchs can take on many tasks, from rising dead to assist their own troops, up to weakening every single enemy. Most enemy soldiers tremble at the sight of a Matriarch, some also turn pale when they only hear the word "Matriarch". These casters are extremely much feared!

Feel free to use this model in any imaginable way (incl. editing if desired). I hope you like it. Have fun with it!

EDIT 1: made the arms, especially the lower arm parts a bit shorter, scaled the skeleton according to the arms' proportion change and made the tentacles appear tealt-bluish, like the Banshee Ranger body parts.

EDIT 2: fixed a bit the bodies proportion and attached the eyes in the portrait to a proper bone. IMO, additional changes in proportions are unnecessary, as it's an undead-monster hybrid creature and there is no direct template which it should resemble all to much.