Lord of the Pit 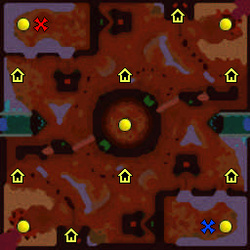 ...Out in the boundless abyss, yet a deeper maw yearns wide. Fierce warlords are pitted against one another in a blood-stained arena only to please their masters...


1. High-ground bases, compromised by the siegebreaker-ramps.

1.1 Two side-entrances, initially covered in trees, can be opened/bypassed using a nearby Goblin Laboratory.​
2. Destructible rocks, blocking shorter paths to the enemy side.

2.1 Creeps guarding the long path have a Mana Burn ability, however they do sleep at night and drop a Replenishment Potion.
2.2 Creeps guarding the short path also have a Mana Burn ability, but drop a pair of Sentry Wards for late-game control over the middle grounds.
2.3 Rock Chunks, blocking a small entrance through the wall, have 60% hp to enable early harass opportunities. Nearby easy camp drops a Level 2 Charged item (no Lightning Shield)
2.4 Oasis creep camps drop a guaranteed Large Mana Potion, but are prone to creepjacks.​
3. Contested low-ground expansion, holding the most gold amount.
4. Greater Voidwalker camp, suited for Tavern Openings, has 0 (~100 by the time) starting mana. One of the Deceivers drops a Rune of Dispel Magic to negate Curse and Frost Armor.
5. Trees, scattered near Taverns and Shops only have 40% hp.​
Overview and Details

v1.2 (10/6/19)
- Decorated the place quite a bit
- The starting bases are now wider
- Increased total tree count from 800 to 900
- Added new entrances through the walls, initially blocked by Rock Chunks (80% hp)
- Added easy creep camps to guard the new entrances: Burning Archer + 2 Fel Beasts, Levels: 9, drops random Level 2 Charged item (except Wand of Lightning Shield)
- Fel Stalker from the Goblin Merchant creep camp now drops Rune of the Watcher instead of Level 2 Charged item
- Greater Voidwalker creep camp (near Tavern): one of the Deceivers drops a Level 1 Power Up (moved from Greater Voidwalker) instead of Rune of Dispel Magic
- Mercenary Camp and Overlord creep camp: moved out of the way to the expansion
- Infernal Contraption creep camp: moved out of the way, closer to Rock Chunks
- Fixed one easy creep camp not being mirrored properly

P.S.: This Hive Workshop Cup entry is a love-letter to Outland/Black Citadel melee maps. While I understand that this type of maps might be inherently flawed due to demon-creeps dealing chaos damage and refusing to sleep, I've tried my best to offset these nuisances. However, my goal was to create a contrasting and, in a way, brutal battlefield by introducing some landscape-driven mechanics and objectives.

mafe
Hm..... I dont quite know what to make of this map. There are no technical flaws, but numerous deliberate design choices that I'm not convinced that they will work out a highlevel play: -Very long direct paths from main base to main base. Scouting or...
Read full review...
Reputation Statistics
Show Ignored Content