This bundle is marked as approved. It works and satisfies the submission rules.
View usage Statistics Legacy download
Reactions: deepstrasz, Mythic, gusanomental and 4 others
Here are my lizardmen models I've been working on wich I decided to put in one pack. All of them are based on Satyr model, though all of them have fully (or almost-fully) custom animations, blood effects, particle effects etc.

-Lizardman warrior: a melee sword-wielding unit with alternate 'defend' animations, 2 versions of the model: one with his own saturated green skin tone and one with a 'common' texture which other models are or will be able to share.
-Lizardman archer: a ranged unit wielding a bow.
-Lizardman shaman: a ranged caster unit. Shoots projectiles from both his staff and empty left hand. Has plenty of cast animations (spell, attack slam, spell slam, stand channel).
-Lizardman juggernaut: a heavy melee unit, wields a large two-handed scimitar. His attack slam anim nicely fits tauren's areal attack. There's also a rare attack animation where his sword bounces from the ground and hits his face with it's blunt edge.
-Lizardman assasin: an agile melee unit. Good when used with blademaster's invisibility. Also has an 'spell throw' animation, where he throws his spear, and a dissipate animation which I added in case someone wants to use him as a hero.
-Lizardman (lizardwoman?) witch. A caster hero model. Has all the nesseesary animations, plus a 'spell throw' (she throws a tomahawk)
-Lizardman royal guard: an agile melee hero model. A blademaster-inspired sword fighter with all one can need, including two anims made specifically for whirlwind hero ability. This is also the only model in the pack where I added ribbons.

Also this pack includes two icons (for shaman and archer). Other two (or three?) are not yet approved and other ones I will make later (sooner or later?).


I don't mind if you use or alter these models, but when you do, please, let me know and give me credit. 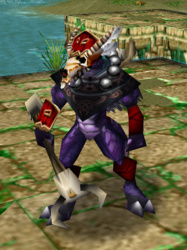 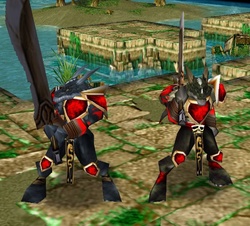 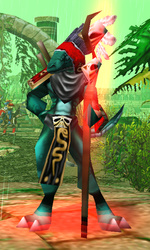 Models 1
exceptional models as I have pointed before. A pack just makes it even more better. Although I would also like to add that I had a faint hope of more lizard models coming from you before you would conclude them in a pack. I hope I am wrong
*Full Marks

Models 7
Awesome pack! Especially I like the animations! I know that your lizards are based on Blizzard's Satyrs, but they have some awesome significant changes that I really like, for example their heads and faces. Each lizard has its unique face and that's good! Particles are also done very well!

Maps 4 Tutorials 1
Ah my love for reptilian specimens and much how I adored dinosaurs until now, this pack serves a good purpose. Approved

Tutorials 1
Brilliant, though you should probably add the other models and icons to it.

Models 2 Maps 1 Spells 1
Absolutely in love with each of these; each model, each icon, is a work of art and while I've never been a "lizard-guy", these resources just ooze creativity & talent.

//EDIT// So this doesn't automagically update whenever it's constituent resources get updated, does it? I was going to say "how convenient; I only have to DL this!", but I realized not only has he done more since this, he has updated old one(s). Meh.

I really love these models! Also they're perfect for a lizardmen race! Great job!

Models 29 Icons 9 Packs 1
uhh, how do I add resources here again?
You must log in or register to reply here.

Make it if you can