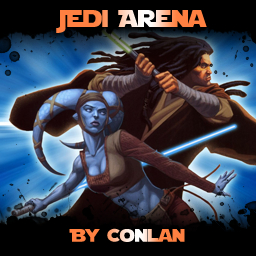 This bundle is marked as approved. It works and satisfies the submission rules.
View usage Statistics
Jedi Arena is a highly-customized Warcraft III map where Players choose one of the 3 Jedi or Sith classes -each with a unique play style and special force powers- and fight against each other in a fully-custom gameplay with manual actions, and in one of the 3 different game modes.

--Highly-customized manual -yet easy- attack system, block system and a jump system, with custom attack and block sounds,
--3 Different modes, providing different gameplay experiences; Deathmatch, Team Deathmatch and Capture the Flag,
--3 Classes with both Jedi and Sith versions with their own character models, each class with 4 unique force powers/abilities, with their own combos and play styles,
--8 Lightsaber colors to choose from,
--7 Lightsaber Crystals, each with their own unique enchantments and special effects,
--A Kill Spree system with custom sounds,
--Kill Bounties are proportional with choosen Points Goal (which is required to achieve victory), making the game even more balanced,
--A Star Wars music,
--An advanced multiboard,
--Random weather effects,
--A game experience which requires pure skill instead of luck or auto-attacking.

Update v2.0 - v2.0+
-------------------
-Added 5 new character models.
-Each Class now has a Sith version and each of it has it's own character model.
-Added 8 lightsaber colors. Players can now change their lightsaber colors at any time by pressing "F2".
-Added 2 new commands; ".fixedweather" and ".fixedcolor", described in Map Info menu.
-Backpack, utility belt and nightvision goggles are no longer displayed on character when equipped due to new models.
-Blue/Red Teams are now Jedi Order/Sith Order.
-Fixed a few major bugs.
-Improved loading screen.

Icons 1 Maps 4
Of course duke-zip! I'm waiting for SC2 and it's powerful engine to make some better maps. No doubt i'll spend countless hours with it.

By the way, i have changed my mind and started working on Torment Arena a few days ago and it's about to be released, hope you'll like. It will be a major update.
About Jedi Arena, i dont see anything to work on this map. Is there a new feature is necessary? Or is there a balance problem?

i don't know, it's just that the speed/strength jedi (sorry i am bad with names) require SKILL, but the force jedi is very easy to pick up and kill people with . The move picks them up and does a lot of damage and requires no aim, then stuns them, and then they can do a force push right after, which does a lot of dmg between those moves. Then since force push stuns they can get a free hit on you, its really cheap ^^+. If there were some harder aim to it it would be better but i still think they give too much stun, imagine in capture the flag! But i am pleased with the map and dont see any need to go back to editing it until you have a lot of time. And i will be sure to try Torment new version and so glad you decided not to quit!!!

Nice map but it really could use some AI

Maps 2 Tutorials 2
It was ok, I felt it was a little to slow. perhaps cool downs, change 30% less is my suggestion.

Models 3 Skins 3 Maps 2
you should make a jedi academy map!
i'm going to try it!

this had a fatal error when i tryed to play it

Is there AI?
You must log in or register to reply here.