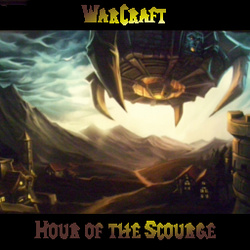 This project is an altered melee map that allows you to play with four different factions from the WoW Wrath of the Lich King lore. You can be the Argent Crusade, the Kirin'tor, the Forsaken or the Scourge itself. Let me try to explain them down below. 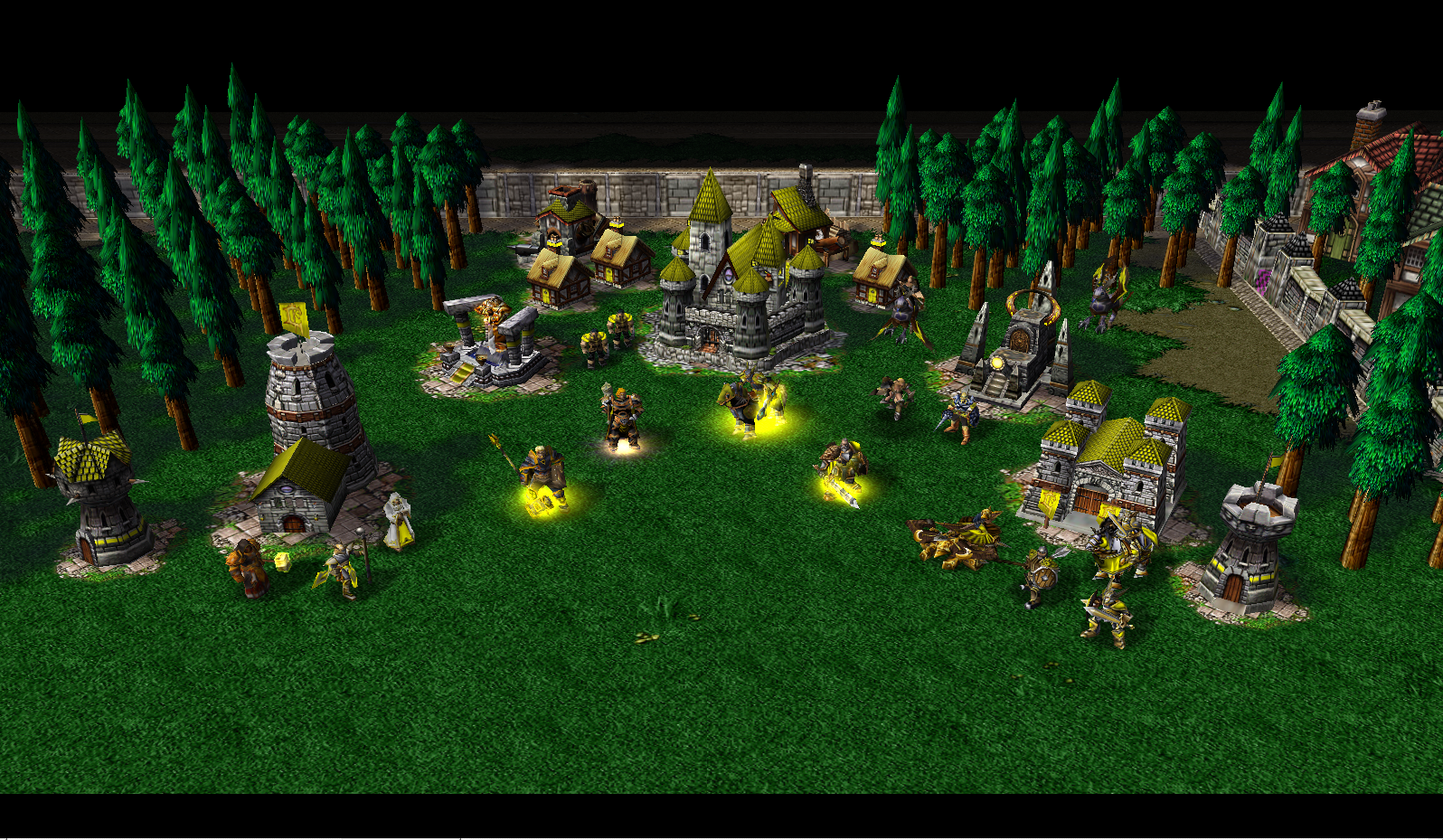 Brave warriors of the Light that banded together to fight the darkness of the Scourge. The Argent Crusade (at least here) is composed by Lordaeron and Quel'Thalas survivors that united their forces to fight the Lich King after his arrival in the Plaguelands.

They play mostly like the normal humans from Warcraft 3, the catch is that their units can be boosted bearing overpowerness with quite a few available upgrades, from Holy Weapons that grant additional attack for mana to Guardian of Ancient Kings which grants a chance of a burst heal whenever a unit falls below 10% health. 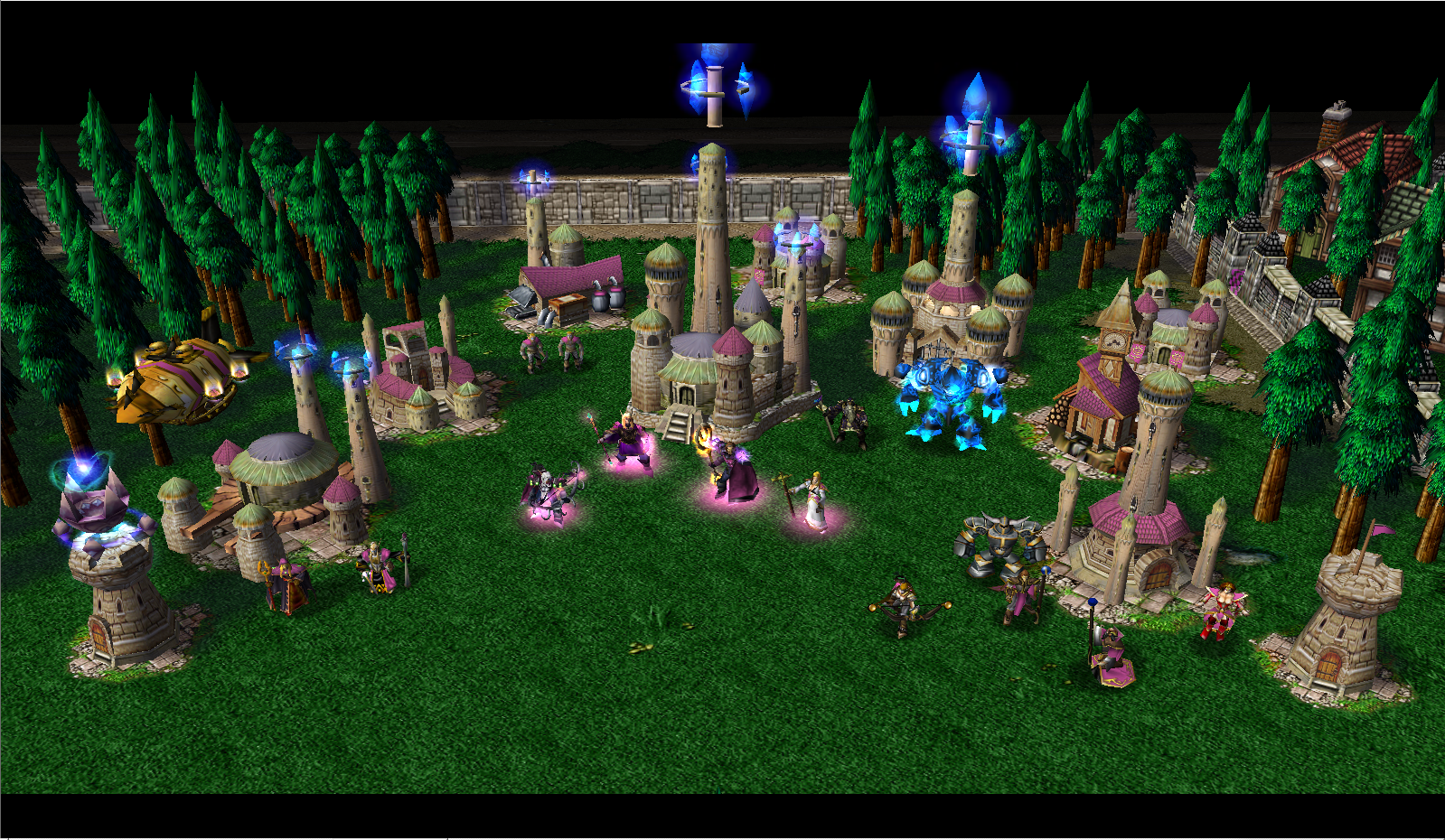 The wizards of Dalaran were finally able to rebuild their wondrous city after the events of the Burning Crusade, now under the leadership of Rhonin, the Kirin'tor launched and offensive against the Scourge and the Blue Dragonflight, with the help of the Horde and the Alliance, in hope of containing these threats once and for all.

The Kirin'tor is what you would expect from a magocratic faction, pretty much all of their units are mages, from the most basic frontliner to the most advanced tier 3 unit and being mages they are all quite resorceful, being able to empower their forces with arcane enchantments, cripple their enemies with debuffing spells and dealing absurd amounts of damage in exchange of being very fragile. 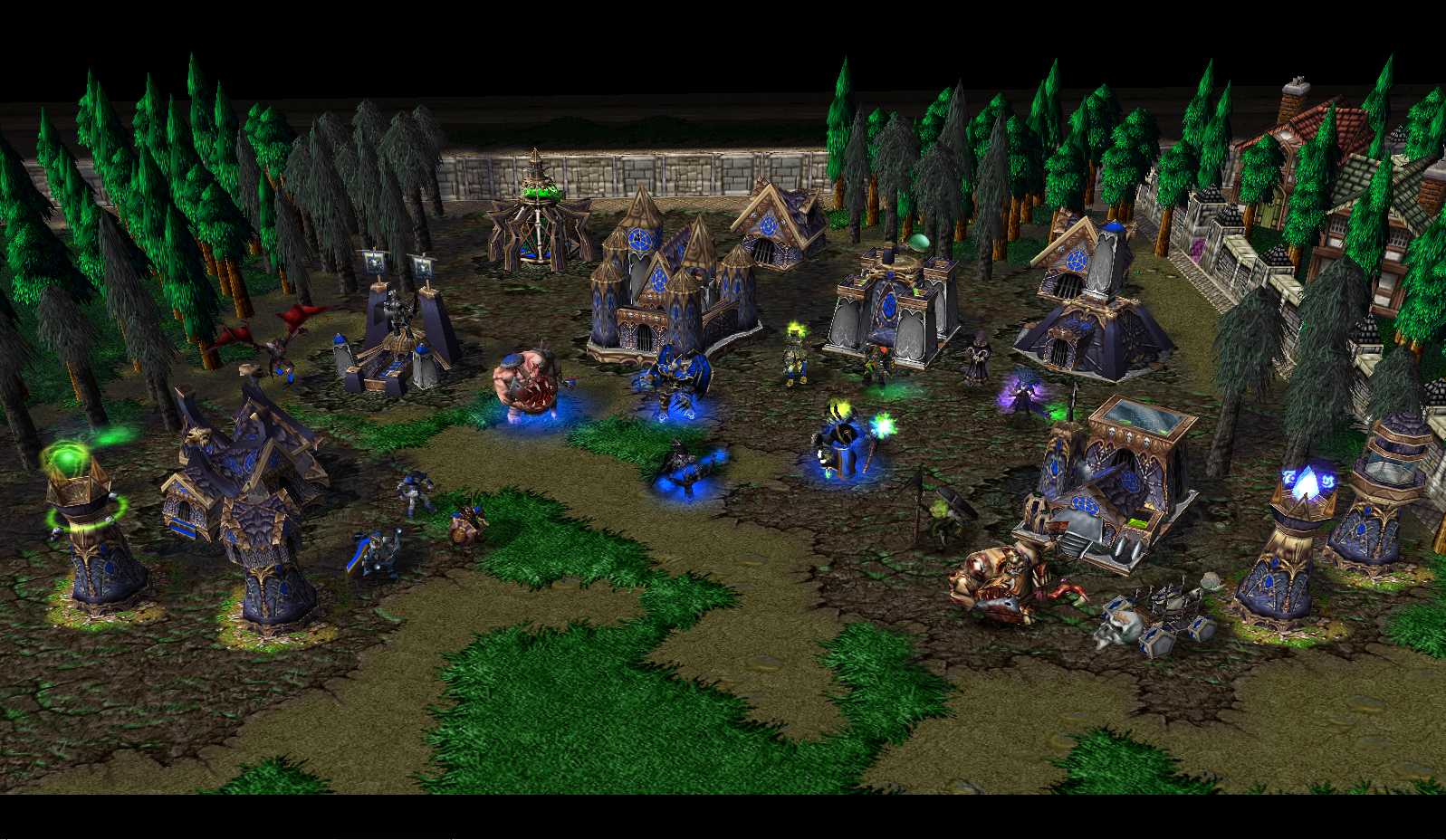 Sylvanas Windruner, now Queen of the Forsaken, rules the ruined kingdom of Lordaeron. In an attempt to build a force strong enough to take over the Lich King, she has maintained the Dreadlord Varimathras under her wing, occupied most of the neighbor territories of Lordaeron and allied herself with the Horde, but the Lord of the Dead may show up at her doorstep earlier than what she could have imagined, far earlier than what she needed to prepare.

The Forsaken are very dependent on the late game as their initial tier forces are rather weak compared to the other factions, but the children of Sylvanas can quickly gain the strength to overcome their foes through powerful unit upgrades and the development of the dreaded Grim Plague. As undead, the Forsaken required blight for a passive health regeneration, something that their ordinary built buildings do not provide, they rely on alternative methods to tend to their wounded, such as the usage of Herbalism (an upgrade to the Garden of Sorrows which allows the building to heal), Apothecaries (supportive spellcaster with a powerful healing ability) or the development of the Synthetic Blight, which will grant some buildings Blight Regeneration and multiply all Forsaken organic units health regeneration by 5 while on blighted ground (take this advantage to overcome the Scourge through attrition, using their own blight against them). 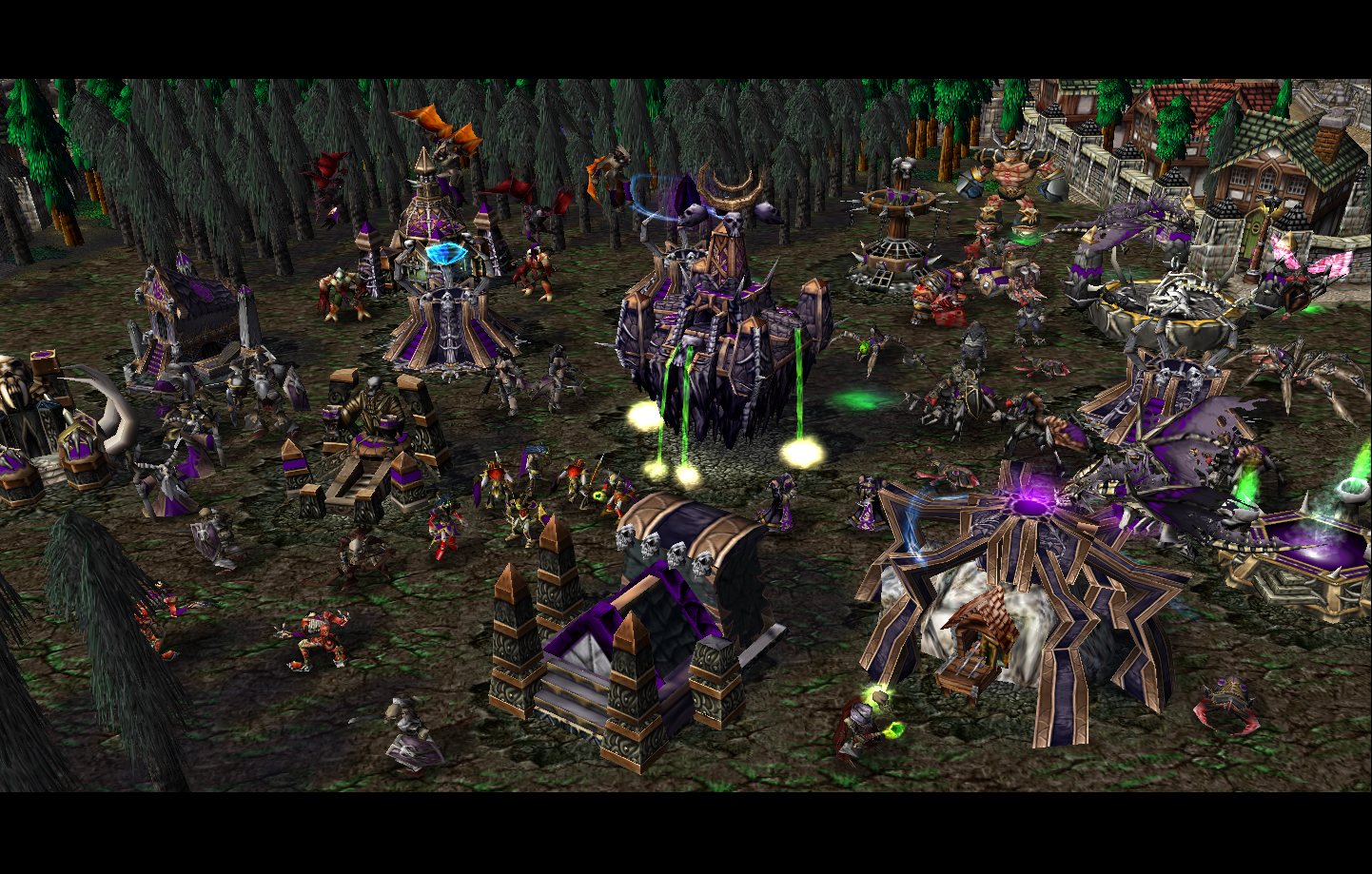 At last the Lich King has awakened and the undead legions sails from Northrend back to Lordaeron so the Lord of the Dead may reconquer what used to be his first kingdom, but the Scourge is not exactly what it used to be, the Lich King knew that his enemies would be more than prepared this time and that he needed much more than simple rotting corpses to purge the living. Following his loyal necromancers and brainwashed skeletons and zombies, Arthas brings the mighty Ymirjar, undead half-giants that worship the Lich King as their Death God and were granted tremendous power through undeath, also there are the cunning and deceiving San'layn, once the last survivors of Kael'thas expedition with Illidan to the Frozen Throne, these unlucky elves were turned into vampiric monsters to serve the Scourge, and finally, the full might of the Azjol'Nerub empire, because you just can't have enough undead spiders, you have to bring them all!!!

The Scourge is by far the most complex faction of the four, it is divided into three sub-factions that you must choose from at the start of the game: 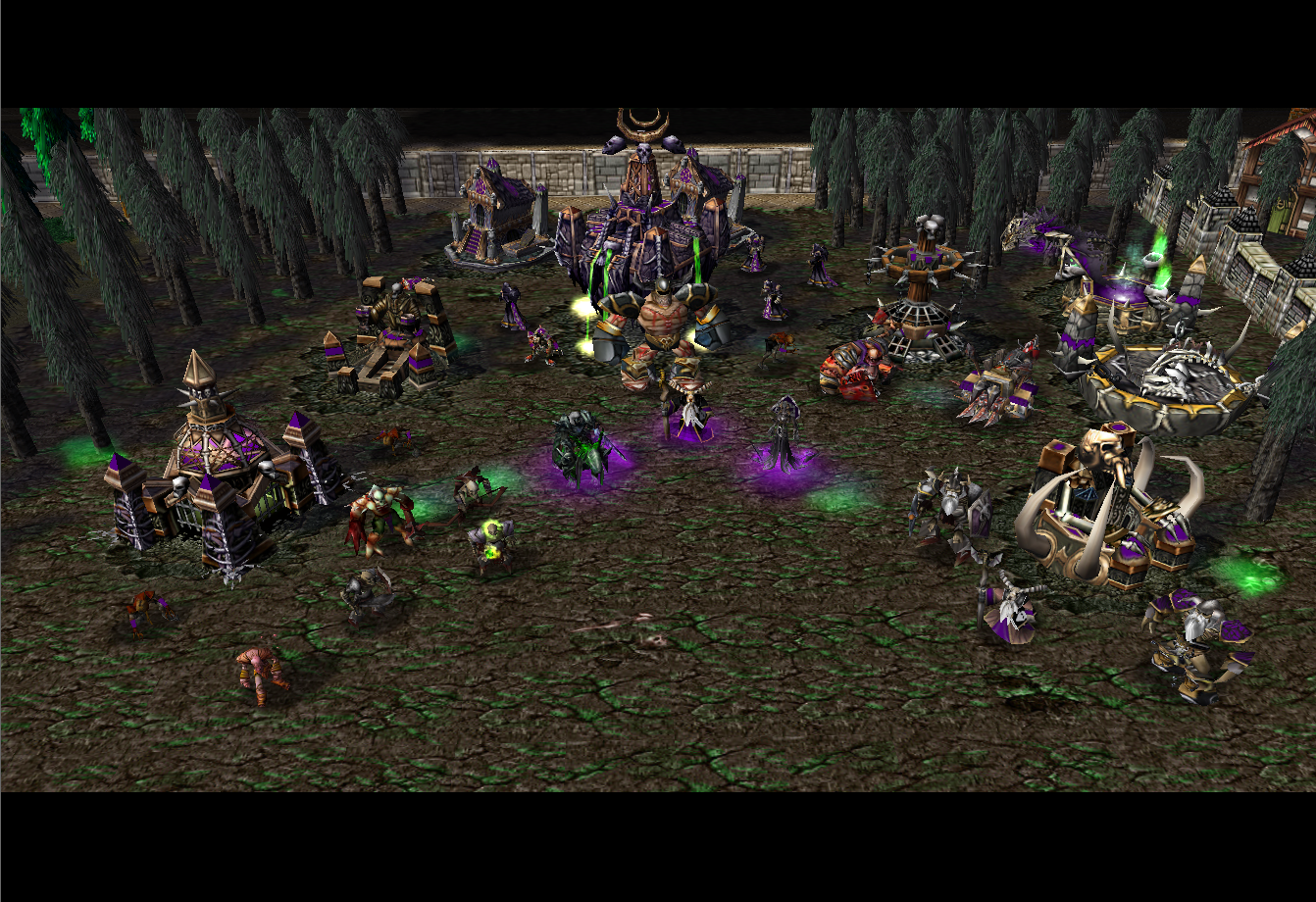 You can follow the Path of Death, to train Necromancers and summon a legion of skeletons to overwhelm your enemies, and if normal skeletons were not enough, you can summon giant ones! From the Temple of the Damned, train your mighty and fearsome Ymirjar. 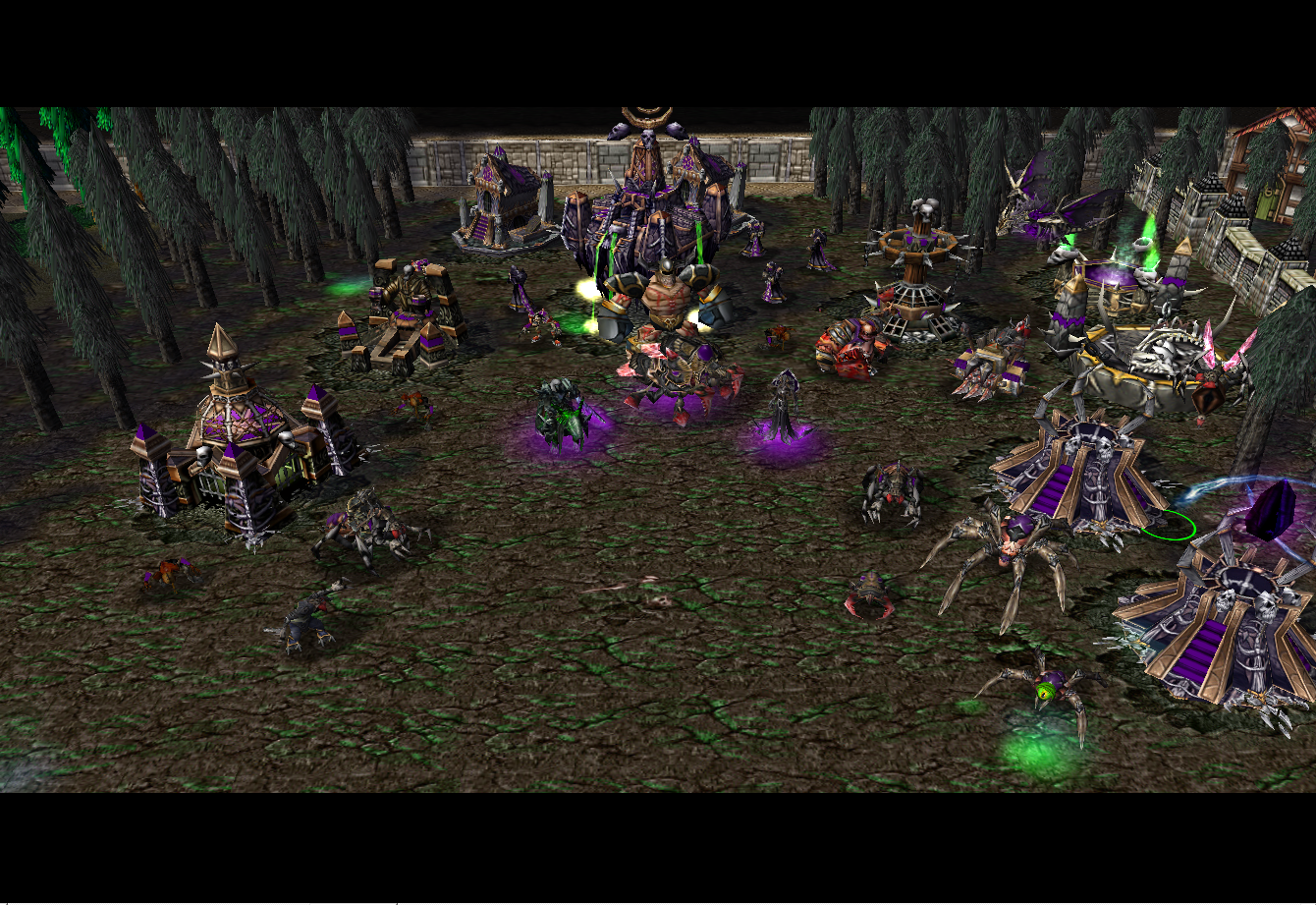 You can follow the Path of Darkness, if you really like some spiders, spawn a swarm of nerubian units, from Carrion Beetles to Mind Disruptors and freakin' skeletons mounted on Crypt Fiends! 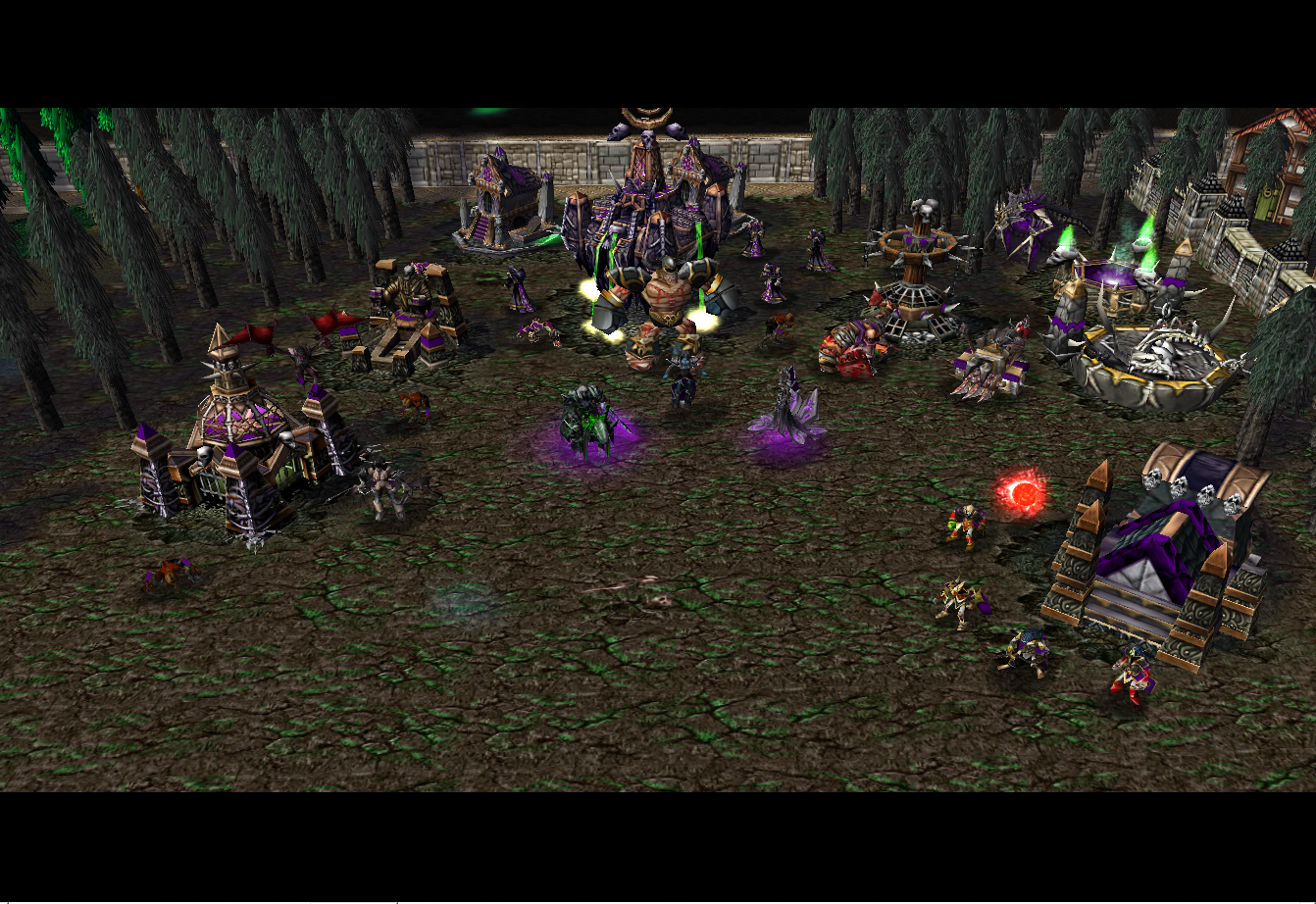 You can follow the Path of Blood, if you really like some Castlevania vibe, build tons of tombs and summon the vampiric San'layn, that while fragile, can deal absurd amounts of damage if well managed.

Will of the Lich King

Finally, upon reach tier 3, The Black Citadel, you can research Will of the Lich King, which will allow you to use the whole Scourge techtree in a single army.

One major difference of the Scourge is their supply production, it is not generated by Zigurats anymore, but rather the Graveyards, but since they are not as cheap as a normal supply building, your production can be supported by other means that vary according to the path you've chosen. For Path of Death, since your army is composed by pretty much skeletons, it is only fair that what would produce supply is your Necromancers, they cost supply, but can produce it as well. For Path of Darkness, your Zigurats can be turned into Spirit Towers to produce some additional supply, finally for Path of Blood, the San'layn really like their tombs, so it is exactly that what will generate supply for them, the San'layn Tomb is the same building that is used to train your basic vampiric units.

If you have issues making the map appear in your WCIII maps section, just rename the file by removing the version info (leaving it simply as "Hour of the Scourge Andorhal")

I appreciate any feedback, as I am still adding stuff to the factions and balancing them out.


At the start of the match, players receive a dialog that includes alliance options, each button represents a player and the one clicked will set a shared vision alliance with the respective player, if it is computer controlled a two way alliance is automatically set. I plan on tweak this system later to allow a more dynamic alliance management, but for now this should do the trick.
I received some pretty good feedback about the faction and used it to rebalance it a little bit:
Grand Crusader
Blessed Armor
Now gives a 30% spell damage reduction and a 15% thorns aura effect

Judicator
Food cost increased to 4, up from 3

Pladin
Smite
Decreased duration to 8 on units and 4 on heroes, down from 10/5

Lord Commander
Rebalanced some of his AoE spells, made them weaker

Golden Strider
Increased attack damage and improved attack rate
Undergate
Even thought the Undergate had its abilities disabled while still playing the build animation, it would still spawn Broodlings. This has been fixed.
*Decreased Crypt Lord's Ultimate mana cost
*Decreased minimum move speed for all units
*Decraased the cooldown for the Undergate's Dark Summoning ability
*Updated the alliance system


The this was way too weak, had to tweak it
Modified so the abilities that are supposed to paralyze may be more effective
300 seconds was way too much, I like the mobility that this thing gives you, so thought about reducing the cooldown so it may see some better usage
As I said, the alliance system has been updated as follows:

When the game starts, players are prompted with a dialog that allows them to choose between Team 1, Team 2 and No Alliance, so you can play 1v1, 2v2 or free for all.

If there is an AI player controlling any of the main factions, you will get an option to directly ally yourself with it.
+Added a new scouting unit to the Argent Crusade: Pathfinder
+Added a new scouting method to the Kinrin'tor: Magic Sentry
+Added a new functionality to the Death Priest's Death's Touch ability
*Minor update and bug fixing to the alliance system
*Minor balance changes to the Crypt Lord hero
*Minor bugs and tooltips fixing

Basic scouting unit, trained at the Town Hall, has hight movement speed, sight range and can cast Enlightenment which grants vision of a target unit, but cannot attack.
Similar to the Sentinel's Owl ability, allows your Town Hall and Arcane Towers to place a scouting spell on a target tree from a long range. Each Town Hall has 6 charges, each Tower has 3 charges.
I felt like this ability a little bit lackluster for a Tier 3 caster ultimate ability, so I decided to add some more impact to it, now on top of nullifying a target's armor it will also damage it whenever it attacks or cast a spell
Contents
Reviews

Rufus
Approved. I have tried this in the Grand Review Exchange already, and it worked fine, and it has some pretty cool new and creative ideas, such as the plague spreader.
Read full review...
Reputation Statistics
Page 1 of 2
Show Ignored Content
Page 1 of 2