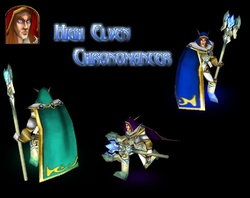 Originally made for the Hero Contest #4 over at WC3C.net, unfortunately my team-mate could not finish coding the spells in time. So I'm releasing this model for you guys to use. I used Medivh as a base model and modified it to make it what it is. The head and hair are from the Arthas model, the head using Blood Mage's texture and the hair using a Campaign Screen texture of white hair with a geoset animation that colors the hair brown during all animations. Staff was made from scratch in Milkshape 3D. The model uses all-ingame textures from various places, be it units, structures or even the "F10" menu you can access while inside the game. Book is geo-merged from the Paladin model. The original mesh was modified slightly to fix various flaws in the animations, such as clipping issues, so if you find such a flaw, please report it to me. The model is best used as a hero, as it has hero glow on his weapon and on the "ground", and it has a dissipate animation. A portrait is included in this model. The model uses Priest's death sound and ordinary Human blood-splats when it dies.


"High Elven Chronomagi are a new addition to the forces of the Alliance. While rare and few, those powerful sorcerers from Quel'thalas can bind the very forces of time to their will. Many of them have not survived the third war, and most of those who survived wish to keep their High Elven identity, rather than becoming Blood Elves, whom they despite and deem corrupted. Harnessing the very flow of time, the Chronomagi are a powerful force to be reckoned with. They have been invited to join the Alliance, to have revenge on their fallen Elven brothers and sisters. Most have agreed, but some are still independent, choosing a life of a hermit, wandering across the world..."

I would appreciate any kind of constructive criticism.

UPDATED - 16/12/09: Most geosets that use the same textures as others have been merged, added a portrait which I forgot to add.

UPDATED - 25.02.10: Major and minor changes. Changed texture on hood\cape and added gems, along with many minor and hardly noticeable changes.