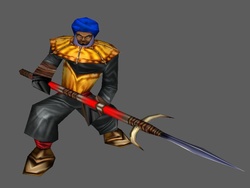 This is a new, higher-quality version of my old Haradrim Pikeman model. I contacted mods and admins some time ago, and asked them if it's alright/allowed to upload this model as a seperate one. Those who answered, mainly agreed. The reason why i don't want to replace the old version is coz the old version can still be used, as a Haradrim in medium quality LotR maps/campaigns or in custom WC3 maps as an addition to the human race.

The Haradrim, also named Southrons or men of Harad, are one of the many human races in Lord of the Rings. They are the inhabitants of Middle-Earth's south to far south. In Peter Jackson's Lord of the Rings trilogy they were shown once in the "Two Towers" and then again at the battle for Pelenor fields in front of Minas Tirith in "Return of the King". They're also included in all of the Battle for Middle-Earth series and also in the War of the Ring game.

Haradrim pikemen form usually the majority of a Haradrim troop. Their only drawback is, like in most Haradrim units. their low armor. Though these guys fight from close distance, they are not much more armored than the archers of the same race. Usually they wear clothes along with a few bronze parts, which is compared to most other Middle-Earth armors just very rudimentary. Nevertheless, they still are capable of stopping incoming riders, especially if standing in close rows in large formations.

Face is the same as the new version of my Haradrim archer but with a different mustache.


None which i would realy suggest.

Maybe some standard weapon and armor updates or something.

Switched the rarities of the Attack anims. Now he mostly displays the impale-movement anim rather than the slashing one. I think it fits more to a pikeman.

Feel free to use this model in any imaginable way (incl. editing if desired). I hope you like it. Have fun with it!