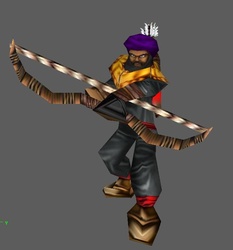 This is a new, higher-quality version of my old Haradrim Archer model. I contacted mods and admins some time ago, and asked them if it's alright/allowed to upload this model as a seperate one. Those who answered, mainly agreed. The reason why i don't want to replace the old version is coz the old version can still be used, as a Haradrim in medium quality LotR maps/campaigns or in custom WC3 maps as an addition to the human race.

The Haradrim, also named Southrons or men of Harad, are one of the many human races in Lord of the Rings. They are the inhabitants of Middle-Earth's south to far south. In Peter Jackson's Lord of the Rings trilogy they were shown once in the "Two Towers" and then again at the battle for Pelenor fields in front of Minas Tirith in "Return of the King". They're also included in all of the Battle for Middle-Earth series and also in the War of the Ring game. In the movies, they mainly impressed when they fired their deadly arrows from the backs of the Mumakils (elephant-like creatures) while charging at the Rohirrim army.

Haradrim archers are among the better archers of Middle-Earth. Although they are by far not as good as the Elves, they are still capable of causing havoc among incoming enemies by sending them a rain of their arrows. Their major advantage compared to Gondorians is that their composite bows have a somewhat longer range. The only drawback of the Haradrim is their low armor, at least at the majority of their troops. Usually they wear clothes along with a few bronze parts, which is compared to most other Middle-Earth armors just very rudimentary. Nevertheless, they still should not be underestimated, they're capable of doing a lot of damage!

Haradrim archers always dip the pointy tips of their arrows in poisons from scorpions and snakes from their homelands. This causes every unfortunate victim to suffer additional poison damage over time. This comes especially handy when fighting heavily armored units or enemy heroes.

Haradrim archers can fire flaming arrows at enemy structures, causing extra damage to them and setting them on fire. A building hit with flaming arrows takes periodical damage in the same way units take damage from poisoned arrows.

The Attack 1 animation is only for attacking units and heroes! The Attack 2 animation with the fire emitter is only for attacking structures and mechanical stuff.
The model has been scaled up for fitting better to other models with the size of Arthas. It doesn't require additional scaling in WC3 Editor for making it look more realistic. As projectiles i would recommend the Skeleton Archer's and the Flaming Skeleton Archer's arrows.


Feel free to use this model in any imaginable way (incl. editing if desired). I hope you like it. Have fun with it!

EDIT 1:
Fixed the clipping of the arrow through the chest and also fixed a minor clipping at the left shoulder.


EDIT 2:
Fixed a few proportion issues, like the size of the head and also removed the Stand Victory anim along with the corresponding particle emitter.

EDIT 3: re-assigned a few vertices to the correct bones, also made a few other minor changes and polishes. Also renewed the icon.

Moderator
08:47, 5th Dec 2014 MiniMage: There's a lot of derp in this one. There's numerous places where the textures stretch awkwardly during animations, there's a lot of clipping in the animations. Whenever he tries to pick an arrow, it stabs through his...
Read full review...
Reputation Statistics
Page 1 of 2
Show Ignored Content
Page 1 of 2