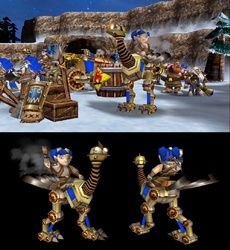 "Eager to support the Alliance on the front lines, the gnomish Field Engineers are a daring breed amongst their kind despite the fact that they do not excel in combat. Mounted on swift mechanostriders and equipped with a variety of egineering tools, they make up for this shortcoming due to their ability to quickly give aid to the war machines of their Dwarven bretheren or the defensive structures of the Alliance when they are needed most, whether it is repairing damaged parts or improving their potency in battle.

However, their innate talents do not end here as the Field Engineers can also set up contemporary defensive structures. Even though they are not as sturdy as the towers that defend most Alliance bases, these structures can be built on the fly and are cost effective, providing excellent makeshift defenses as well as effective weaponry."

Okay, now onto something completely different... a female gnome engineer on a mechanostrider. That's got to be a first for WCIII, right?

The idea behind this girl is to give the Alliance a support unit that is meant to repair structures and other mechanical units in the heat of battle, as well as quickly building cheap,contemporary structures such as turrets. She can further support these by using augmentive abilities, such as perhaps an ability to give friendly mechanical units or structures increased attack damage in a similar manner to Bloodlust. If you do give her abilities, be sure to use Stand Work as the animation names. The reason that she is mounted on a mechanostrider is because... well, she would have to catch up to them somehow!

As for the model itself, the rider was heavily edited from the Villager Child as a base, with the head mesh being remapped and edited to look more feminine. In addition, the rest of her body was also heavily edited, retextured and remapped, while parts from various other models (some of which that you might recognise from my earlier Dwarven Demolition Squad) are also used to make her look more the part for an engineer. The Field Engineer's trusty mchanostrider, minus the lighting around the eyes, is also 100% fully made from scratch. No, I am not kidding on that one, it's a first for me.

This model uses ingame textures, so no need to worry about texture paths. Just simply import both the model and the portrait into your custom map! However, there might be a few issues with the model if not taken into context, the main problem being that there is no talking portrait. This is because there are no suitable voices for a female gnome in WCIII, nor even any gnomish voices in general as the gnomes seem to have only officially re-emerged in the lore during the post-WCIII/WoW era. By taking that into account, I thought that the safest bet would be to make the portrait work in a similar manner to the Goblin Shredder. By that, I mean that the rider's face is actually made visible in the portrait, but will not actually talk as the 'strider would be the one that is making all the noise.

If you want to use this model then feel free to do that, provided that you'll give credit to me in return.

UPDATE 1:
Recalculated extents and removed the sound from the Stand Work imation as I can't think of a suitable replacement.

UPDATE 2:
Adjusted the portrait background and recalculated extents. Hopefully that should finally eliminate the issues regarding the health bar being displayed too high up above the model.

Moderator
[img] [img] Misha [img] 7th Jul 2013 Moderator's Review: unit's health bar is high in the air, recalculate the extents in model editor, and this should be good to go, since it works ingame and all.. death is a lill funky.. and 'shredder...
Read full review...
Reputation Statistics
Page 1 of 2
Show Ignored Content
Page 1 of 2