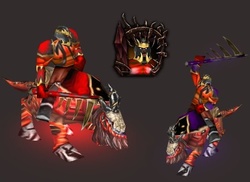 The Fel Orc Outriders are Frostwolf Outriders that followed Grom Hellscream during the third war at Thrall's command, to keep an eye on Grom and make sure he fulfills his duty and harvests lumber for Thrall's camp. When Grom found the Fountain of Health, tainted with Mannoroth's fel blood, the outriders were commanded to drink from the red waters. The result would be a powerful demonic warrior, with both shadowy warlock spells and the sheer might of the Horde at his disposal. They were granted Fel Stalkers to ride and new armor and weapons to use in combat. They were spared by Thrall and brought with Grom to be cleansed when the Burning Legion's invasion of Kalimdor begun.

Basically... A fel orc version of the Frostwolf Outrider model I made a long time ago.

Don't forget to give me credits in your project if you use this model.

UPDATE: Fixed a bug caused by Magos which made the hair not display during the animations.
UPDATE 2: Made arms beefier. Screenshot is still unupated.

If you are using this model, please be sure to use this awesome icon made by NFWar with it(click to download):

Or, as an alternative, use this amazing icon made by Mr.Goblin:

You can also this awesome icon that NFWar made, which can be used as a spell or ability:

Moderator
17:57, 19th Aug 2010 General Frank: Simply, nice and lovely edit to the Thrall model. Looks pretty cool and might be useful for some. There are some tiny flaws (texture strech on the stomach area, some misplaced verts) in the model, but they are...
Read full review...
Reputation Statistics
Page 1 of 2
Show Ignored Content
Page 1 of 2