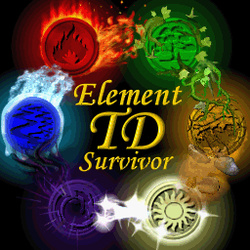 What is Element Tower Defense?

Element TD is an eight player Warcraft III Custom Game. Following the tradition of past Tower Defenses, invading hordes follow a specific path from start to finish. Towers must be built, creeps must be killed, victory must be earned!

A Proliferation of Strategy: Earth, Fire, and Water...

Unlike most Tower Defenses, Element TD has two major innovations that allow for a depth of strategy unseen in contemporary Tower Defense gameplay.

Each elemental armor takes additional damage from the element preceding it and retains near-invulnerability from the element following it. Consequently, each tower deals damage based on its attack element versus the armor element of the invading creeps.

Element TD retains a unique form of leveling up defensive towers that opens the door for a new dimension of strategy. Beginning at level 5 and for every 5 levels after that, the player chooses an Elemental Guardian to summon. These guardians channel the secrets of deep and powerful elemental magik, and when killed they grant the user the use of a specific element.

These elements either infuse existing towers with their specific qualities or inhabit their own, specialized elemental tower. Beginning with two elements, the user can combine elements and create unique dual and triple element towers. Each tower has its own offensive and support capabilities. No two elemental towers are alike in Element TD.

The Devil's in the Details...

Each element can be chosen again in order to create base element towers of levels 1, 2, and 3. In this way the 6 base elements create six base towers, each upgrade corresponding to how many guardians of a single element a user has slain.

Furthermore, each hybrid tower can be upgraded to increase its own specific attack or support capabilities. Towers may only be upgraded if all of their component elements have been brought to the next level. In Element TD, better towers are only available by killing more Elemental Guardians.

The Rich Get Richer?

While players' instincts might be to build as strong a defense as they can manage in a Tower Defense, you are rewarded for putting off building that expensive tower and hoarding your money in Element TD. Every 15 seconds, all players gain interest on their unspent gold to the tune of 2% of their current cash. Players may also increase the initial interest rate once every five levels at the cost of an Element pick. In higher difficulty levels survival depends upon proper tower placement and cash management.

In allowing some gold to accumulate, you may find that early level creeps sneak past your defenses; however, Element TD does not trade off money lost in kills for money gained by hoarding.

Players no longer lose gold for missing out on a crucial creep kill. In most Tower Defense games, if you let a creep reach the end of its path, you lose a life and whatever gold you would have gotten from killing it. In Element TD, leaked creeps respawn at the start of the path. This gives you another chance at the gold they carry, but gives the creep another chance at you.

To reach the end of Element Tower Defense, all 60 waves must be completely defeated.

At the End of the Road there Lies a Dark and Disturbing Victory...