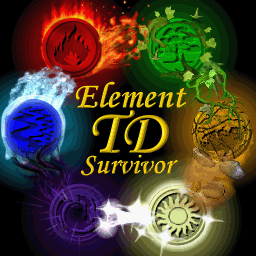 This bundle is marked as useful / simple. Simplicity is bliss, low effort and/or may contain minor bugs.
View usage Statistics

As a fan of Element TD, I always got some idea on improving it, but the original map was not released. I was thinking to rewrite the map by myself (for sure, it will take me ages to do that).
Now, Karawasa and his team is no longer working on Element TD for Warcraft 3. He hoped public to continue the map.
Seeing this as a good chance to improve it, I decided to start working on it.

Special Abilities : Normal, Fast, Regeneration, Illusion, Undead, Mechanical.
The towers that can be built are based on elements, while creeps spawned may have special abilities. Have fun.

http://eletd.com/
They are way too much for me to post here, so I linked it to the official site of Element TD.

Changelog :
v5.0
Tower :[/b]
Spore Cloud :
- The spores are seperated once the primary spore expired.
Contamination :
- Reverted back to older version.

Icons 24 Packs 1 Skins 1
You have permission to do this?

To commemorate the release of the long awaited SC2 alpha version tonight, I unleash this upon you. All I ask for is that you give due credit. I hope some of you will keep the game fresh (or make translations).
Click to expand...

Icons 2 Skins 2 Tools 3 Maps 10 Spells 5 Templates 5 Tutorials 6
I wound approve map until you don't improve it a lot.
Few improvements don't make new map.
I will reject it now and I won't change my opinion.

Use map development forum instead.
Once when you bring something unique to map we can give you credits.
You must log in or register to reply here.