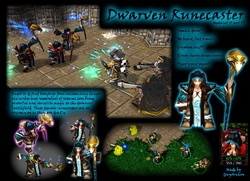 Features modified spell animations, and attack animation. If you use this in your map, please give credit. You may edit this model if you ask permission first; though its unlikely I'll say no.

Her staff as an item attachment can be found here:

Her staff as an ability icon, and more importantly, as her Caster Upgrade art, can be found here:

Moderator
09:40, 10th Nov 2009 DonDustin: Improve the portrait please changes were made. The model could be usedul for any dwarven troop.
Read full review...
Reputation Statistics
Page 1 of 2
Show Ignored Content
Page 1 of 2