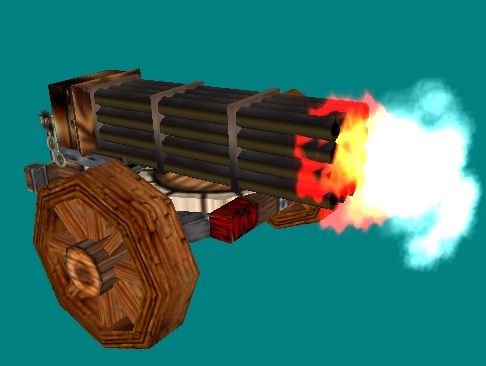 This bundle is marked as approved. It works and satisfies the submission rules.
View usage Statistics Legacy download
Reactions: dorimor, deepstrasz, Nightmare2077 and 5 others
Cyclone cannon was developed to fight big hordes of orc warriors threating the borderlands. Based on ancient Guild repeating cannons, but since the Guild technology was long gone, this was the best approximation. However ineffective bureaucracy delayed the production of this fearsome weapon and before it could see the field of battle, the war ended and orc were driven away. So cyclone cannons sank in oblivion and those few prototypes were gathering dust in secluded warehouses scattered through the land. Until now. Dark times are approaching and reviving this almost forgotten weapon can greatly increase the chance for survival and fight the evil.

Capable to fire 16 shots per minute, which is more than most skilled elven archers could fire, can replace that many gunners, reducing the number of manpower needed in each regiment or village guard. Thanks to ingenious mechanism, it is able to fire fairly accurate shots with controllable rate of fire. Thanks to repressive fire this cannon can bring, it can slow and scatter the enemy making an easy target for sharpshooters or cavalry charges sent after the volleys are fired. There were made also versions with more barrels, but they were more cumbersome, less reliable and more innacurate.

:
Works in-game and performs well.
Nice use of textures and well made animations and effects.
Approved. Good job.

Maps 2
I will founding it, Great!!

Icons 1 Spells 1
Looks very nice but would be good to have a variation with less "woody" base, u see?
The barrels and stuff look like modern weapons and the wheels are wooden Can't u make it look a bit more metalish?

anyway, the model is pretty cool :3

Icons 2 Skins 1 Maps 1
This cannon is exactly what i was looking for! Awesome model and +rep! 5/5

Maps 1
Looks like Machinegun in Napoleon or Industrial... BUt its great

I just do always Forever Alone.

Windu said:
Looks very nice but would be good to have a variation with less "woody" base, u see?
The barrels and stuff look like modern weapons and the wheels are wooden Can't u make it look a bit more metalish?
Click to expand...

I don't understand... You want less wood, but you're upset about it looking too modern? Wood is more primitive, making it look less modern. If it were to be made entirely of metal, it would look more like a weapon from the early 1900's.

Models 32 Icons 3 Packs 1 Maps 5 Tutorials 1
Because of heavy weight of that many barrels the base of this cannon is made by resistant, yet light wood, cut from nearby woods.

However this cannon didn't shoot a single shot to an orc.

Maps 8
Finally! Organ guns! Back then, I was trying to look for something like this. At least now nobody would feel the pain I felt back then. 5/5!