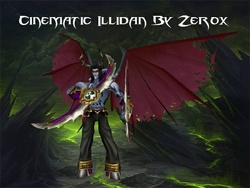 Alright you guys already know who Illidan is so I won't go into detail explaining that. This is Illidan Stormrage as he appears in his fight with Arthas in the end of wc3 the Frozen Throne.

I was browsing the wc3 mpqs when I came across this and found out that the entire battle (even the stuff with speed lines and stuff) is all 1 model that Blizzard very effectively used to make the battle scene. So I just deleted everything but Illidan and then I threw him onto the bones of EvilIllidan.mdx (the normal evil Illidan model in wc3). Though I did cheat sorta.

He uses EvilIllidan.mdx's original wings because there's about 15-20 bones that are just for the wings and there was no way I was gonna pull off the actual cinematic wings well by reattaching them to those bones. I just didn't want to try as I'm certain it would have been bad. Its hardly noticeable though.

This model has a working talking portrait that is just a animated version of the unedited Illidan I got left over from the cinematic battle. So its got the actual wings in there. I did throw in a portrait background in there too.

Enjoy the model and feel free to edit it if you want. I'd appreciate some credit as it did take 4 hours to do all this but the world won't end if you don't give me any. After all I didn't do much but animated the mesh.

Mostly Blizz's work here. At least I built my model out of their work. XD

I would appreciate credits if you use it in your map. And heck if you do find a use for it let me know I'd love to try your map.

Update: Okay after a long wait I've become much more experienced in boning and better methods of doing such. So I've fixed the legs' fatal issues and it works much nicer now.

I also removed the morph as requested by the mod who reviewed this. I'd appreciate it if another mod looked at it now that it's fixed.