Cameras are objects that can change the perspective and view (literally) of a player. They are one of the more flexible objects in Warcraft III, allowing you to modify several of its properties, even via triggers.

This tutorial will tell you all about cameras, how to use them, and advanced methods to utilize them to the fullest.

First, let us begin with showing you the camera palette. To do this, move your mouse to the upper toolbar and select "Layer", and choose the option "Cameras". If you already have a palette open, you can just select the selection bar and choose "Camera Palette". Else, you can just press the standard hot-key, "M". 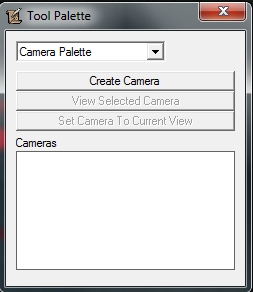 Let's take note of the three buttons listed in the palette.

Okay, by now you've probably created a camera object. It should show up as Camera 001. This is the naming convention blizzard has created for cameras:
- Camera ###
The # symbolizes the camera number it is. The second camera created would be Camera 002, third Camera 003, and so forth. Anyway, this is just default naming, you can name it whatever you want. How? Right-click the camera in the palette, and select "Rename Camera". 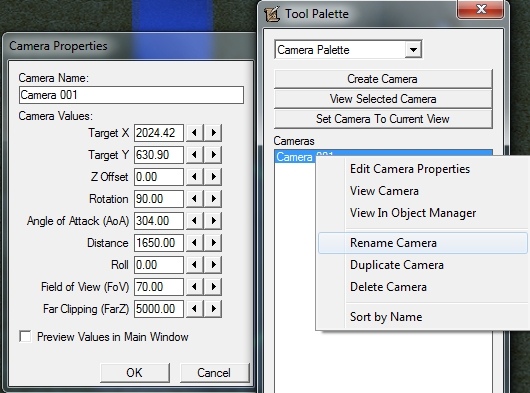 Whoa, lots of data now. Time for the explanation of the values:

Well, now you the big majority of cameras. But there are still a lot of things to learn! This is the method of creating cameras using the camera palette, which is one of the more easier methods of creating cameras. However, there is another way to create cameras completely using triggers.

Note: This area mostly involves JASS at the moment, skip down below if you are solely a GUI user. (Unless you want to look at it anyway)

How do you make cameras? There is no camera variable type.

Nope, there is no camera variable type, but there is a camerasetup variable.

JASS:
Cameras made with the palette are camera-setups. This is how blizzard creates cameras:

Basically, this creates the cameras from the palette. Yes, this is just as efficient as creating it in JASS, but why create camerasetups in JASS then? Well, you can create a variety of more control this way. Generally, as a JASSer you might want to do more complex things with cameras. And who wants to refer to their camera as gg_cam_Camera_001 all the time?

This just basically will teach you how to make them this way. Okay, so the first thing is creating a camera-setup:

JASS:
JASS:
Great. However, this is not ready to be applied yet. At the moment, all of its values are null. Most likely 0 for every field.

JASS:
This will set the desired field to the real - "value" over the duration specified. The fields are found by Blizzard using:

JASS:
Now, luckily Blizzard has created constant integers to represent the obtainable fields. This makes the job a ton easier for us:

JASS:
Now, how do we use these? Well, the example I showed above should sum it up pretty well, but I'll explain a bit more:

JASS:
To instantly snap for that field, you can set the duration to 0 and it will instantly set that field. The only real time where modifying it with a duration makes a difference is after you've applied the camera object. You can modify it to any value you'd like.

Yeah, this may seem tedious, but it is useful for naming purposes and basically will allow quick changes if you are sure what you're doing. Okay, this basically covers it for JASS, and although it is slightly less efficient and somewhat illogical (might as well use the generated cameras), it can be useful for certain camera systems in GUI.

GUI Camera Creation:
Ah, I see I can make a camera object variable in GUI!

Great. This will basically do the same as CreateCameraSetup() in JASS. Now, to be able to modify fields of a camera in GUI, you have to apply the camera first. To do this, I've created a camera object variable named "CameraCC".
This will allow you to modify the "current" camera's values since there is no way to actually set a specific camera's values in GUI.
This is the function, "Camera - Set Camera Field (Timed)". It is essentially doing the same as the JASS function, except this one calls a function in blizzard.j which already has a GetLocalPlayer() == Player(#) so you can specify which player you want to modify the camera for. This, obviously is easily doable in JASS, but since you can't detect the local player without custom script, Blizz decided to make some premade functions to help you all out. Just be careful of disconnections if you use GetLocalPlayer(). Read this guide. You will use GetLocalPlayer() a lot for cameras if you are a JASSer. In GUI, they do it for you.

Anywho, this will allow you to modify any of the fields listed above to the appropriate value you specify. I don't think much explanation is needed for that considering there are some thick explanations (as well as neat animations) if you scroll up. 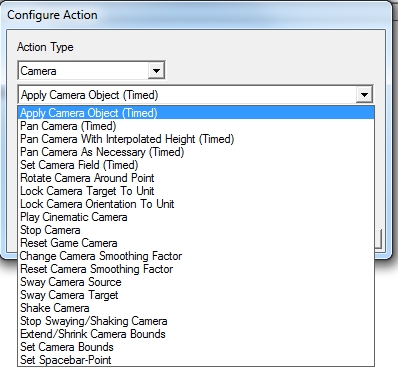 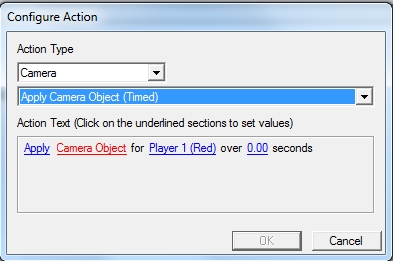 JASS:
Pretty much the same thing as SetCameraField(). Except you can use it to add or subtract as far as I know.

JASS:
This will allow you to apply a camera with duration and Z. GUI has these, but they are called by other functions.

JASS:
These are useful for retrieving fields and positions. Doable in GUI, but useful to mention since it is great for creating camera systems.

JASS:
Same as above, except it gets the data of the target point the camera is oriented toward.

JASS:
Panning functions, easily allow you to pan to points without modifying camera fields. Use the GetLocalPlayer() block to apply them for only a single player.

JASS:
Basically like PanCameraTo. It just doesn't pan as far as I know.

JASS:
Modifies the point where a camera moves when a player presses the spacebar.

There are more, but many of them have GUI counterparts or are self-explanatory.

Why are these used? They provide several functions that do a lot of complicating/dirty work. Some are not necessarily needed, but they are useful to have. As a longer-time JASSer, you might not need too many of these, but some of the camera functions are very useful and complex. The system makes it kind of so that you only need to use the functions in the system for your cinematic. If you change cameras, you'll probably realize that it is annoying how changing your camera will cause it to abruptly change speeds and have a crappy transition. The cameras are not good for easing, so this system helps a lot for that.

Cameras are complex, but easy once you get used to them. Play around with them and you'll love them. I might extend this tutorial a bit more if people want to know about smooth camera applications and easing, but this is all for now. Good luck with your future camera-creations!

Camera Testing:
This is a quick test map to test camera fields. Type /help to get a list of in-game commands. This is just if the camera fields are confusing you.

It's been 9 days with ~50 views. I thought having animations would make it more interesting. I need a catchy title.

You do realize the moderator for the tutorials section is dead missing lazy right?

Spells 1
nice job on the use of pivot/flash

Packs 1 Maps 35 Spells 8 Tutorials 5
The jass camera you mention, it was for vjass.. isn't it?

Septimus said:
The jass camera you mention, it was for vjass.. isn't it?
Click to expand...

It should be regular Jass. (The functions described are natives)

I only briefly looked at this and I'm amazed. (Neat animations!)
If you haven't, you may want to talk a little bit about Preview Camera Motion. (I think you can only do this if you applied a camera object with the GUI.)

Icons 1 Tools 1 Spells 4 JASS 4 Tutorials 8
Yep, it is doable in JASS and vJASS. Like two of the examples use vJASS's global blocks for readability but it is completely doable in both.


watermelon_1234 said:
I only briefly looked at this and I'm amazed. (Neat animations!)
If you haven't, you may want to talk a little bit about Preview Camera Motion. (I think you can only do this if you applied a camera object with the GUI.)
Click to expand...

Thanks. =D And I will definitely add the preview camera motion later on, I completely forgot about it! =P Thanks for the feedback guys.

Icons 1 Tools 1 Spells 4 JASS 4 Tutorials 8
It seems like I've gotten enough positive comments. I might update for preview camera motion eventually. But for now, I don't want this clogging the tutorial submission. Approved by my standards, if anyone has any objections to this, or any questions for this tutorial, please feel free to notify me.

Spells 1
Hey dude do you know how to make a fps just like halo because im trying to create a halo map, i got everything i need just the cameras that im not very good at please send me a message if you can thanks.

very nice tutorial, especially the demo map, I really like it!

Maps 4
Nothing worst than starring at the gui trigger editor at all these different camera options and not having any definitions for them. Thanks for shedding some light on the subject.

And thanks for having the link in you sig, I'da never found this.
I'm too lazy to hunt for it

If you know what it does, please insert the info about it into your guide .

Maps 2
Question: how to get point from current camera target for a player

salukage said:
Question: how to get point from current camera target for a player
Click to expand...

You can check out sample code here in case you're interested:
http://www.hiveworkshop.com/forums/lab-715/observermode-playercameradata-244987/

Even the system itself is usable (ex: PlayerCameraData.x[0] will give the x-coordinate of Player 1 (Red)), but note that you are limited by sync times so it will pretty much always be a couple hundred milliseconds behind the player's true camera coordinates.

Maps 2
OK thanks,the thing is I'm making a fps map so I am looking for replacement for set udg_point_temp=GetCameraEyePositionLoc() for a particular player.

Maps 1
how to make camera 5000? my game it zooms out seemingly too far to the point where the fog of war comes into existence, and everything is black but the health bars above the units lul.

Spells 1
you have to set the camera far z value to something higher, maybe 10000. You can change it in the trigger editor at "camera - set camera field"

Maps 4
How can you make Preview Camera Motion work? It just discordantly pans the cameras. Would actually be helpful if it worked since testing the map each time kills a lot of time. Would be great to start the motion from the selected camera onward.