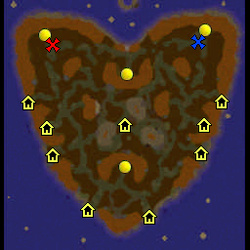 Love Island
by
Wardota2 Gamer
An island made with full joy and love!. This island is espical some say that a couple once live in this island then they both live together until death. They say there may be no forever but there is still together..........

Hope you all enjoy my Melee Map! This took me 1 day to make this melee map including the tests! And sorry for the delay! This map is made especially for Valentines Day!
Thank You!

v1.1
-moved the mercenary camps (with the current creeps) in both sides of the map
-balanced the item's of the green creep camp and also the orange creep camp
-terrain updated
-added bubbles in the water
-added river rushes in the side of the map
-small units (especially your worker/peon/etc.) cannot walk between the trees [fixed]
-cliffs and more terrain/doodads and other stuff are added in the middle of the map
-balanced the pathways (also the cliffs) in the tavern (middle of the map)
-way gates now have the same color
-added rocks near the trees to prevent unit escaping
-mud golems item's are now perfectly balanced
-changed the goldmine and the red creep camp in the top
-moved the goldmine (along with the creeps) a bit more to the south
-unbuildable terrains in the top side of the map are thinner that before
-Overview Updated

v1.2
-changed the whole environment into a non flat but bumpy surface
-some terrain changes
-added 2 camps (symmetric) Orange Camp
-Updated the discription
-some doodads fixes
-both of the red camps in the gold mine's range is now increased from 300-500
-new buildings added in the melee map ----> Marketplace
-Overview Updated 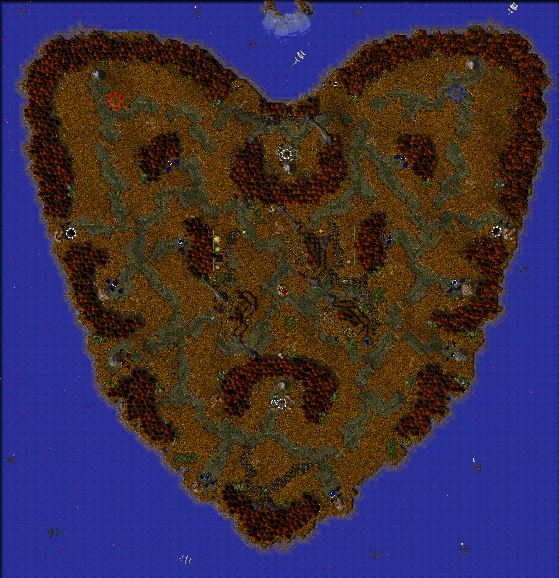 All credits goes to non other that @Wardota2 Gamer and to Blizzard Entertainment for making this awsome game!
Also thanks to Hiveworkshop.com and to the all Members!
Contents
Reviews

WolfFarkas
Not agree. Doing that is = to make a map from 0. He literally has to remade the map since adding another player means to change the simetry lines. Also copy maps are forbiden in theory, I do not recomend to use the same terrain for diferents versions...
Read full review...

deepstrasz
Approved based on @Ragnaros17's review. However: -terrain is still flat -some shops can be accessed without the guards to notice -:rolleyes: not your fault but the Golems might be returning to their initial spot by traversing the map instead of...
Read full review...
Reputation Statistics
Show Ignored Content