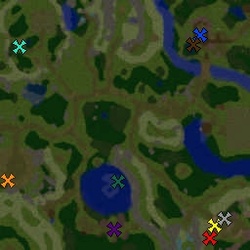 A mine near lake

Maps Version
V.1.0.1
Map Uploaded, tested, and fixed.
V.1.31
Fixed lots of bugs, made Talor a hero who can only get to level 6, Quest now give Exp, Added trolls camp(East from Orcs camp) there still no quest with them, but will be added soon, shorted few dialogs, Talor now have 3 skills first 2 are from level 1 other one is from level 4. With spelling ,I ain't one of those who can do without a mistake, so you will find few in my map. Now guard can die from four or five wolfs, meaning without any help he will die.
V.1.41
Fixed few bugs, added koboldos camp and one side quest with it, you can get it at Silver Spoon harbor, added 1 more side boss. Made orc's camp -Hard .
V.1.42
Fixed few map problems.
V.1.51
Fixed few map problems. Shorted almost all cinematic , updated few skills.
Slingshot-Aiming time Lvl1 changed from 1.6 to 1.
Aiming time Lvl2 changed from 0.8 to 0.5.
Rage for Basy-Attack speed lvl1 from 80% to 60% and movement speed from 0.4 to 0.3.
Attack speed lvl2 from 120% to 100% and movement speed from 0.6 to 0.4.
Added one secret. Hint-its flying. Still working about better Heroic ending. And trolls camp.
V.1.60
Fixed few bugs, changed skills K.O damage.
Lvl1 changed from 70 to 45. Lvl2 changed from 110 to 70.
Added quest with trolls. Fixed few map problems, some trigger problems, changed terrain a bit. Still working with better Heroic ending.
V.1.71
Fixed huge bug. Added Better heroic ending - You need to finish quest [guards escort] and do [Knights tricky question] in right way , so they could help you against Drul and his minions to fight.
Added back ground music-Carlo Gesualdo(Belta, poi che te accendi).
Guard now has a Battle scream skill. Gives 25% more attack damage.
A little changed the forest so it wont look so empty .
Now I will only update the bugs not the hole map. I will be working with Geros Islands and soon will be school so I will rarely update the maps.
V.1.75
Fixed environment a bit.
Skeleton archers now have frost arrow ability, Deals 10 damage and stun for one second. Balanced bandits, orcs , skeletons , and trolls a bit.
Fixed Trolinys quest. Updated ending a bit.

Moderator
18:59, 21st Sep 2014 Orcnet: "] The story throughout the game is very fast forward and it gives more quick time to go straight for the story instead of leveling up in the forest and so, however most of the quest are like chores and some obvious...
Read full review...
Reputation Statistics
Show Ignored Content