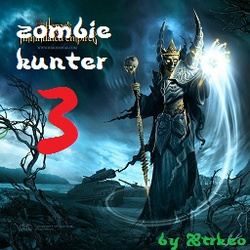 The game is based on Zombie hunter 1 and 2 (by Gravit)
It's a skill-based game (hit and run), and very challenging: You control one hero who is often one shot-killed.
After Jaeden's death, the story continues in this third episode of Zombie Hunter; a small group of reknowed hunters are heading to frozen lands where strange creatures were reported. Try to survive through this challenging adventure full of secrets, creatures and ruled by bosses worthy of their title. This third episode includes of new items, new upgrades, soundtracks and customized boss fights. A real challenge for ZH fans because of its difficulty, as the other Zombie Hunter games were. Thank you Gravit for your games!​
I'll be grateful if you could tell me EVERY SINGLE mistakes you can observe (spelling mistakes too- my first language isn't english).
Comment it, rate it, I'd love to improve my skills in map making. Credits
Special thanks to:
-CRAZYRUSSIAN!!!! For its awesome Freezing title
-The Reaper, for its Bloodmage skin
-Gar'nogal, for its Rifleman skin
-Afronight_76, for its Dreadlord skin AND for its Lich skin
-Dionesiist, for its Ghoul skin
-Hueter, for its Abomination skin
-Just_Spectating, for its faceless skin which perfectly fits with General Frank's model

-13lur, for its Footman skin
-ANdROnIQ, for its Grenade icon
-FrIkY, for its Rifleman icon
-tee.dubs, for its Chainsaw icon AND super model
-The_Silent, for its Rifle icon
-Illidan(Evil)X, for its Grenade model
-Peekay, for its Volcano Ashes model
-MeteORA, for its Hat model (that I edited)
-DonDustin, for its Icecrown Revenant model
-Inico, for its Shimmering Portal model
-Ket, for its Potion model
-General Frank, for its 4-legged Faceless model
-WILL THE ALMIGHTY, for its Explosion model
-Kitabatake, for its Light Orb model
-And of course, Konstrukt, our modern warfare expert, for its Sniper and Shotgun Missile model

CURRENT VERSION 4.1 IS AVAILABLE ON entgaming.net !!