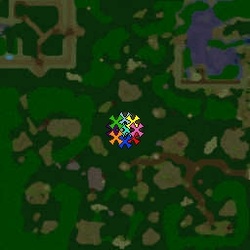 1.02 update improves terrain significantly, adds a new (and extremely useful) structure, and fixes a few bugs from the previous version.

Build a village, create houses for people to live in, tax them, and use your money to build an army. Form alliances with your neighbors and crush your opponents.

What is True Village Wars?

True Village Wars is perhaps the first village/city builder map to actually strive for balance and strategy, and look good while doing it.

In other builder maps, you build a couple hundred units that have no food or gold cost, and gain massive amounts of gold from them. In TVW, you have to build houses and let people move in, then tax them. You can upgrade the occupancy of your housing structures as well, to further increase your tax income. You also have to harvest lumber, which can be done in a number of ways. Axe men, mechanical harvesters, and flying harvesters all can be used for this purpose. You can also trade 10% of either resource to gain some of it in the other, where gold is worth twice as much as lumber. Another unique feature to this map is that some units have the ability to kill people in houses. If you can get a good raid in, the enemy can lose perhaps a quarter of their income, perhaps more, adding a layer of further strategy. If you can't wipe out your enemy, at least weaken them as much as possible, right?

TVW also has a unique system of Unit Traits gives each unit (with a few exceptions) its own stat bonuses, which can make all the difference in a fight. Certain traits can only go to certain unit types. The traits are the following:

There are 3 tiers of gameplay, starting with a Village, and going to Town, then City. With only Village tier, you can only get basic units and only a couple upgrades. Once you upgrade to Town, your available units, structures, and upgrades doubles. Getting to city adds even more units, and doubles your available upgrades yet again.

Balance was one of the key reasons this map was made. Pretty much every builder map I've played has had absolutely atrocious balancing, which greatly detracted from the experience. TVW aims to be just as balanced as regular Warcraft III. While some units are certainly better than others, no unit is without its counter. Just because the enemy has a couple dozen top-tier units doesn't mean they can't be defeated if you use the right strategy and abilities. 20 Grand Knights will easily fall to 12 Paladins of the Holy Flame, even without their heal/buff.

Custom and triggered abilities further add to gameplay. Paladins of the Holy Flame have a healing spell that not only heals for a pretty good amount of health, but also gives a damage return bonus temporarily. Acid Bomb Launchers have a powerful armor-reducing ability that bounces acid among enemy units. Defenders have an extremely useful armor bonus aura that activates when they enter defend mode, sacrificing damage and speed to improve the armor of allies. The Naga Traveler can summon tidal pools, which slow down enemis in their radius greatly. The Lich traveler can even summon up a terrific blizzard to damage his enemies.

-Tons of custom units, upgrades, and abilities
-Traits - Every unit you train (with a few exceptions) comes with its own natural trait, which gives it a specific bonus. Some traits are Defensive, which gives a slight armor boost, Survivalist, which gives a speed and health regeneration boost, and many more
-Tax-based income. Build houses to increase your population, and gain money from your taxes.
-Regrowing Trees
-Hired travelling heroes to help, each unique in function
-A LOT more


Changes
1.02 changelog
Massive terrain improvements
-Added new base
-There are no more hexagonal flower patches
-All old bases except bottom left improved slightly
--Top left has a small garden to allow for a small lumber operation
--Bottom right expanded and entrance shrank
--Top middle expanded and two new entrances
--Top right now has a wall around and a few other changes involving the shape
--Bottom middle closed up slightly to make it more defensible
--Middle left is now a base
Updated the Tips for Noobs section to better help start them off
Added Architect Hall because late-game it's annoying to only be able to get builders from your main building
Removed Heavy Glaives from Medium Factory, since the Research Vault already had it

Fixed the typo in the hired Traveler trigger that I forgot even existed
Changed the Defender defensive bonus to affect himself as well, but reduced radius
Changed Defenders in Defend mode to deal slightly less damage and attack slightly slower (Base damage 22 -> 17, attack cooldown 1.35 -> 1.5)
Fixed Sharpshooter lumber cost
Added the effects of Goblin Repair Crews to the structures that didn't recieve it
Added Heavy Stone Masonry upgrade, which improves the armor of all structures except Fountain by 2
Fountain HP reduced 75 -> 25
Reduced cast time of Demolitions 5 -> 3
Removed lightning effect from Demolitions entirely
Added Deconstruct to Military Contractor, functions the same as Demolitions ability but with a 6 second casting time, meant to be an early-game building remover
Barrage (Mortar) no longer affects heroes
Added Heavy Glaives upgrade, improved Glaive Towers damage and range slightly
Improved Mechanisms upgrade affects Artillery Towers
Slicer damage increased 27 -> 34
Firecatcher armor reduced 2 -> 1
Paladin of the Holy Flame HP reduced 540 -> 505
Added Holy Infusion buff to Priestess to make her more than simply a buffed High Priest, increases armor by 1 and hp regen by 1 per second for 40 seconds
Changed tooltip for Vertical Gates to inform people of the fix for when they pop up in the wrong position