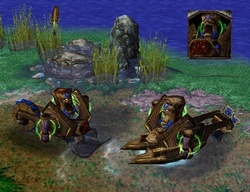 weeell.. this is a "troll skiff" thingie i was doing for Kyrbi0, according to the ideas he was sketching, but to be honest, i'd say that it ended up as something a lot more different than what he was imagining

still, i tried to make something with totems that shoot darts and have some voodoo-like things holding them together.. =P aand, me being confused, i first created a whole naval version instead of the ground one

Although, that is fixed, so.. enjoy it, dude =P

EDIT: I decided to shorten, rewrap, and further tweak the land version, hopefully it feels a lill more like a troll craft, while having enough TC and 'nurnies' (whatever that means)
I kept the naval version as it is, as i wanted it

Soundset for these, Definitely 'Spirit of Vengeance' >:D because that's what the 'avatar of vengeance' uses. (warden ultimate spell)

That is all, folks.. give credits to Misha if you use these, or.. come get da voodoo >=P

Moderator
16:26, 21st Aug 2014 MiniMage: It's a little funky looking, but nothing that hinders its approval. Personally I think it would've looked neat to have a troll there, but maybe that's just me. Anyhow, approved.
Read full review...
Reputation Statistics
Page 1 of 2
Show Ignored Content
Page 1 of 2