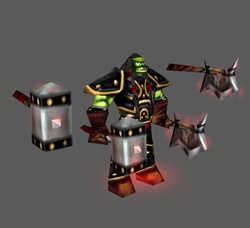 This is thrall when he get's pissed, He climbs down his nice high wolf and goes medieval in your ass.

Works well in-game, I don't know why some random geos appear in the 3D viewer.

Update: fixed the side wrapping and the random appearing geosets

Update: Changed the left hand weapon to an axe.

Update: Reduced file size from 130.33kb to 94kb. Merged the portrait and the actual model. Correct the walk anim. Modify the crotch wrapping, with a li'l tweak and turn.

Update: fixed the Attack slam anim, moved the head back a li'l.

I've updated it. I wonder why it hasn't changed in the 3D viewer.