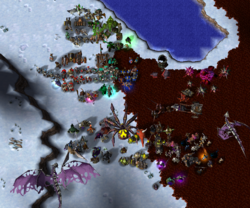 THE OLD WORLD WARHAMMER TOTAL WAR1.34
The Old World Warhammer Total War is a map on the warhammer universe and it goes in the old world this Map is very inspired by the total game of warhammer. The principle of the Map is a team fight with a checkpoint system that provides income and allows the construction of buildings.
Gameplay:
It's a 12 player map, it's a fight between the forces of order and the forces of destruction.
I tried to make the game even more strategic than it already is.
To begin with, I wanted to bring into play the large units and the anti large units that I made so that the rider would have difficulty with the Spear and the same with the big monsters.
I also tried to create a magical wind system for mages that would greatly increase their mana regeneration depending on where they found it, but those locations aren't fixed.
I make sure that all shield units take less damage from ranged units.
and finally creates a city improvement system with different buildings that can recruit different units or even add a fixed garrison to the city.

The Order Forces are made up of 6 factions.
Empire
the empire is the largest nation of men is ruled by the new emperor Karl Franz. The forces of the empire are a very versatile army with infantry knights and the power of blackpowder

Bretonnia
Bretonnia is a large human nation located to the west of the empire ruled by the king
Louen Leoncoeur. The Breton forces are made up of very good knights but their army is mainly composed of armed peasants and there are very few ranged units
High Elves
a Hight Elfe of Ulthuan had a vast territory but today most of their colony was lost in the old world the high elves are still present in a colony or rather in an enclave in the city of Mariensburg. The High Elves are a declining faction and are not numerous but are formidable warriors and archer.
Wood Elves
The Wood Elves are the elves who refused to leave the old world and seek refuge in the magical forest of Athel Loren. The Wood Elves have the best archery in the world but a weak infantry but with the spirit of the forest.
Dwarves
The Dwarves have an immense territory present in almost all the mountains of the old world. The Dwarves have a very good infantry as well as a very good artillery.
Kislev
Kislev is a faction in the north of the empire and which is close to the land of chaos, it is the border of the world of men. The men of Kislev use practically the same equipment as the men of the empire.

The Forces of Destruction made up of 6 factions.
Warriors of Chaos
The Warriors of Chaos are a faction of men corrupted by the Gods of Chaos. The Chaos Warriors are made up of very good infantry with very few ranged units
Green skins
The Greenskins are a faction that brings together all the Orcs and Goblins. Green skins are made up of a wide variety of infantry with monsters
Skavens
The Skaven are monsters that infest the world. The Skaven are made up of a very large army and units equipped with Skaven technology.
Von Carstein
The Von Carsteins are a line of vampires who rule the province of Sylvania. Vampire counts are made up of a wide variety of infantry, from zombies to ghosts and monsters.
Follower of Nagash
led by Arkhan the black this army of king of the tombs simply wants to resuscitate nagash but for that it must destroy the force of order
Dark Elves
A black arch approaches the old world at its head Morathi has just respected its pact with chaos
Change the distance from the camera: -cam [number]
AUTHOR NOTES:
I wanted to learn how to make a map and I loved this universe so I decided to create this map.
This map is my first map, so I learned how to use the editor on this map. I discovered the world of warhammer with total war and since I became interested in the universe even if I am nothing for board games, I always know the tradition.
I also have a lot of problems in my English and I am sorry that my map is made in French and English normally it is not even noticeable in the games the only way to see it and to change the language of the games

to contact me my discord: Babavoi # 6756
I'm creating a discord server for the map you can join it now Join the The Old World Warhammer Total War Discord Server!