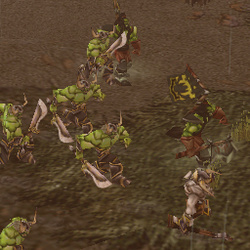 Basicly, I wanted to create a map set in the time of Warcraft 1 - a dark and mysterious time. It's not a remake, however.
I tried to create a completly new game experience which I tried to make both fun and easy to learn.
I wanted the map to look good and be realistic. I tried to create a beautiful map design. I've chosen the models I
imported very carefully because I definitely wanted them to fit in with the game. I tried to preserve the original
atmosphere of wc1 and wc2 which were pretty dark and cool and bring it back to live in a newer game (which does not instantly
give you eye-cancer). I put a lot of detail-work in the map and I hope people appreciate that.

However, there might be room for improvement. I appreciate CONSTRUCTIVE criticism. Especially about the following aspects:

- balance of the factions
- fun factor
- spelling/grammar mistakes (as you may have guessed English is not my mother tongue)
- is it possible to play fluently?
- bugs
- how do you like the atmopshere?

USED TOOLS (all from www.hiveworkshop.com)

ABOUT THE RACES AND HOW THEY MADE THEIR WAY TO THE EPOCH OF WARCRAFT 1:

- Humans: Classic. They've always been there. However, the 'old' humans are way more fixated on strong cavalry (knights) and have cleric as healer
- Dwarfs: No good game without them. Little people with affinity for explosives. In my map their guns are pretty noisy

- Elves: rather Bloodelves. Magic addicts. They would be pretty weak without their mana restoration abilities.
- Orcs: The 'old' Orcs. Wild and evil. With Warlocks, Necrolytes and even some Undead units. Never before have the Orcs been so dark!
- Trolls: the history of Azeroth mentions a troll war even before the Orcs came. Anyway, I decided on blue Trolls.
- Undeads: Even before 'The Scourge' came there were Necromancers, Dark Mages and Death Knights. Any questions?


THIS IS A MAP WITH 6 COMPLETLY NEW FACTIONS (Human, Dwarf, Bloodelf, Orc, Troll, Undead). EACH FACTION OFFERS
RATHER FEW UNITS (7-10). I BASICLLY TRIED TO CREATE THE RIGHT ATMOSPHERE FOR EACH OF THE RACES. THE WHOLE SETTING
IS RATHER WARCRAFT 1 ALIKE (dark and obscure). I TRIED TO KEEP BATTLES REALISTIC (units die fast). I WANTED A FAST
AND EXCITING GAMEPLAY (units are trained in 0.0 seconds) I WANTED A SIMPLE GAME CONCEPT WITH FEW BASE MANAGEMENT
(Players must conquer Blacksmithes/Lumbermills for resources) I WANTED WALLS AND GATES INCLUDED (gates open and close
on order) I WANTED A BEAUTIFULL MAP-DESIGN (there's loooots of shrubs)

THIS MAP IS ABOUT...

- Details
...injured units are bleeding for some time and move slowly
...crates that give the player gold/lumber can be picked up simply by moving over them
...some units get promoted automatically when they survive battle for a while (Footman becomes Captain, +10 Armour)
...units of the same type will move with slightly different movement speed to make their formation more dynamic


- Realism
...the propotions of units and buildings are realistic which means that units are pretty small
...most units die pretty fast
...riders can ride down enemies
...Flaming Arrows can be used to set fire to wooden units
...unit responses are in-game (Warcry when they attack, cast spells etc. - can be heart by the enemy, too)

-A New Game System
...the game is based on securing neutral buildings all over the map
...these neutral buildings increase the gold/lumber rate
...some factions can build fortifications (such as walls, gates, towers)
...Catapults and Ballistas are build in the field (in a box that breaks open once they're completed)

- Unique Factions
... I tried to create a unique gaming experience for each of the factions
... each faction has unique abilities which are typic for it (example: Humans are the only faction which is capable of trading Gold for Lumber/Lumber for Gold))

UNIQUE ABILITIES OF THE RACES (examples):

Human:
- The humans can trade gold & lumber at the market place

Troll:
- Assassins are permanently invisible and won't be become visible when they attack

Undead:
- Necrolytes and Death Knights can Summon masses skeletons wherever they are


I will try to improve this map if I receive constructive feedback (this sentence sounds weird...)