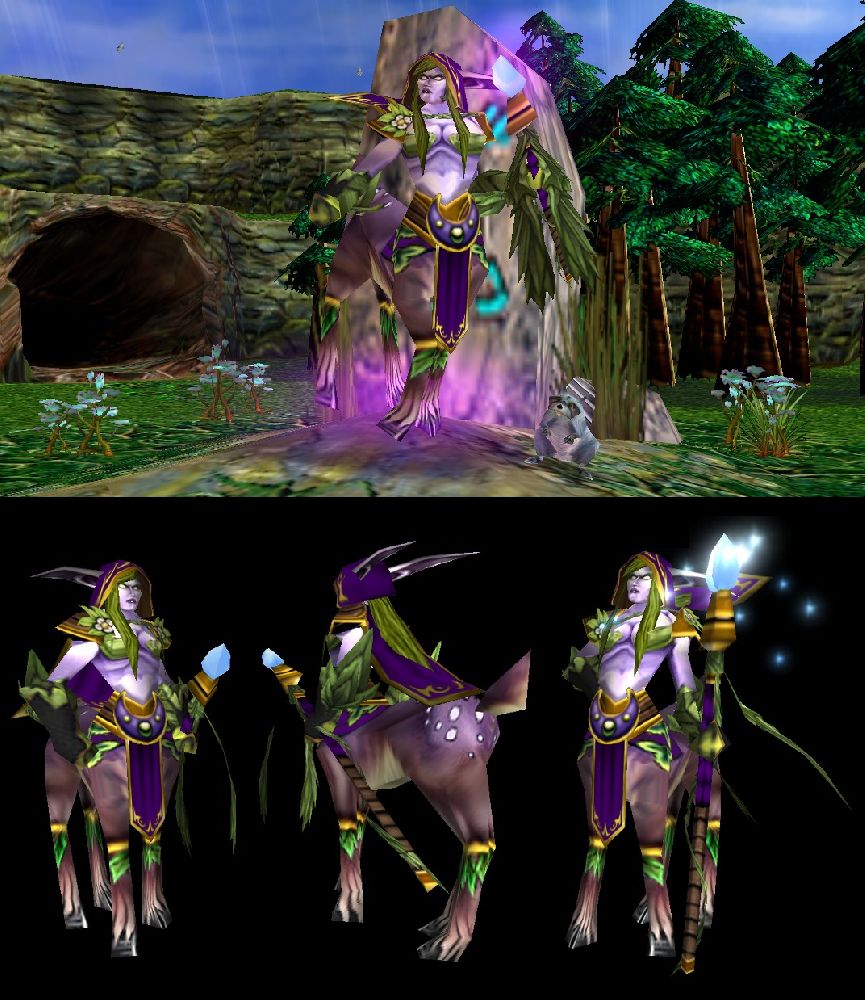 This bundle is marked as approved. It works and satisfies the submission rules.
View usage Statistics Legacy download
Reactions: tillinghast, Ceterai, Stefan.K and 14 others
After fiddling around in Mdlvis, I've finally got this model to work!

The concept behind this hero unit is an elder Dryad who is adept at using nature magic to support her allies rather than directly going on the offensive. I suppose the ultimate spell for the Sylvan Enchantress could be some sort of nasty mega-buff!

This model uses ingame textures, so no need to worry about texture paths. Just simply import both the model and the portrait into your custom map!

If you want to use this model then feel free to do that, provided that you'll give credit to me in return.

UPDATE 2:
Major upgrade! The model now uses full ingame textures which are adapted to fit the model, effectively reducing file size and also making the model easier to import. The buttons have also been changed to match the updated model. There are also various other changes as well, such as...

- Particle effects should now look less "flat" and are unshaded.
- The staff now has a teamcoloured glow. The glows should now also disappear when the Sylvan Enchantress dies.
- The staff's crystal is now unshaded, which means it can glow in the dark!
- More bones are added to various places such as the cape, just incase more animations need to be worked on.

UPDATE 3:
I forgot to change around a few bones on the staff, so I did that. Nothing major, though.

UPDATE 4:
I've made a few more changes since the last major update. These new changes include...

- Using a clever texture and geoset animation technique, I've now made the light from the staff's crystal (not the team coloured glow) fade as the Sylvan Enchantress dies. The crystal should be completely dim by the time the Enchantress reaches her Dissipate amination.
- Added the belt from the original version back in. Also changed the staff's texture a little bit to look closer to the original.
- A Dissipate sound has been added.

This should be the last update before I move on to a different model.

UPDATE 5:
After experimenting with animations, I have made a new update! Changes include...

- The hair and cape should now properly flow with movement instead of being stiff all the time.
- Added a Stand Channel animation.
- Reworked the particle effects to something that is nicer looking.
- The staff no longer goes through the body during the Death animation.

UPDATE 6:
Another animation-related update! I've now modified both Attack animations, making them more spellcaster-ish and less like she is trying to throw away her staff and ragequit. As the Sylvan Enchantress is supposed to be a spellcaster hero, the new Attack animations should be more fitting for her role.

UPDATE 6.5:
Fixed the screwy tail animations. I dunno how those got there. O_O

UPDATE 6.75:
Made the teamcoloured areas of the model unshaded.

- The cape has been lengthened a bit and its animations are reworked. Personally, I think it looks nicer.
- A new and improved portrait.
- Reworked the Dissipate animation, looking more like those of the official WC3 hero units minus the Undead ones.
- Applied some visual tweaks here and there. They may not be immediately noticable, though.

- Various meshes have been edited and remapped, while some have also been given new textures, creating a new and improved look.
- Added various other details, such as the vines wrapping around the staff.
- Made the leaves on the staff properly animate with movement.
- Recalculated extents.

Keywords:
hero, dryad, keeper of the grove, female, centaur, deer, doe, spellcaster, not the dryad you are looking for
Contents

Models 26 Maps 1 User Interface 1
So a geomerge between a dryad and Jaina. Why did that require two custom skins?
Why did that even require one custom skin, you could've managed with ingame skins.

Models 17 Icons 16 Packs 1
I don't know how to say this without sounding like a moron, but can anyone demonstrate to me how this can possibly be done with only in-game textures? I'm just curious to know since a couple of people had already pointed that out, and I agree that two custom textures is a bit much.

Models 2 Maps 1 Spells 1
While I'm no skinner, I have some experience trawling the MPQ & especially in making use of available resources. Basically (having not downloaded your model yet), you take the custom textures you have, determine what parts of the model they belong to, and then you muck about in the MPQ's (war3.mpq, war3x.mpq, war3xlocal.mpq, etc) for suitable textures to replace them.

Resourcefulness is key; take a look at some of the greats for in-game textures (-Grendel?, WhiteDeath, Deolrin, some others, please-don't-be-offended-I-didn't-include-you, etc ). If you look at the textures of their models, you'll notice they pull from all sorts of sources (parts of boats & buildings, icons, parts of items, etc). It's almost certain you can find what you're looking for if you look hard enough.

Models 9 Icons 3 Maps 4 Spells 1
Good model on image. In game is too good but with medium texture.
But this model have 1 -
Because i don't like her attack Sry
4/5

Models 2 Maps 1 Spells 1
Quite a 'sweet suite' of improvements. Could be a good female-version of the Keeper of the Grove (like the NE need another female hero xD).

Spells 1
I'd say it's pretty cool. Was looking for a NE model and here's one.

You applied nice changes to it. GJ!

well done 4/5 for this one i think

Models 2 Maps 1 Spells 1
Wow. Not only is this model impressive, but what's really impressive is how you keep on enhancing it (even though it's already approved). Good show.

It wouldn't be amiss for you to post again each time you fix something; that way it'll get more attention.

insta replace druid of the groove with this model xD

Along with the Icon.

I can change this with Dryad's old version.

this is a great addition to the elven race

Icons 13 Skins 2 Maps 19 Tutorials 1
Decent model, i would have used if not for the face. Which could use some polish. 4/5

Maps 2 Spells 4
imo the hood is enough, no need for cape
You must log in or register to reply here.