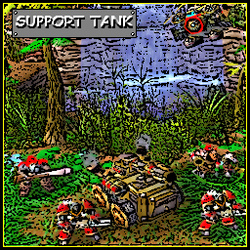 Select one to his taste combat vehicle support, perform the necessary improvements to it and go to the aid of his infantrymen, who go on the attack on the enemy. Competently use their reserves and destroy the headquarters of his opponent at any cost!

You play the role of commander of the army at your disposal there is a small military base, consisting of: a command staff - your main building, which you need to protect because of its destruction will lead you to lose. In the command staff are available to you commander the ability to support the troops, such as air strikes, artillery or laser gun hit the satellite, which is located in the orbit, many of these abilities require energy to use (the usual mana) you want to earn in battles, but some especially powerful, are used for money. On your base are constantly coming reinforcements, consisting of various kinds of infantry: the usual shooters, snipers, mortars and flame thrower. Join the ranks of manpower in the tent, you can reserve troops, also located in your database, where you can buy already referred to the soldiers for direct command and control, plus a couple extra marines such as field mechanics or medics. Also, you can make here to improve, thanks to who will receive each time more reinforcements. There are still based on the tank factory, which produces combat vehicles for kommandira, all machines are different from each other, but play a role - they need to support the infantry in combat. Among the machines available to choose from: ambulance, engineer vehicle, medium battle tank, heavy howitzer, helicopter gunships, armored ... Commander may take only one car, but can it change at any time during the battle, if it has no damage or after her death. Also for the troops can produce a variety of improvements at the research center to improve the combat effectiveness of your troops. Defend your base is provided by two defensive towers that can be rebuilt in the more powerful. Take Command commander and lead your army to victory!​

Acknowledgments:
Newernight, OraCool, Eretik-kun, Owl, Sg0D, Phantomaster and many other good people
Special thanks | r player nick Eligreen for every support, lots of interesting ideas and proposals for the establishment of the BTR-100, for the translation map
Special thanks to the company for the BLIZZARD that gave the world its a wonderful game Warcraft III, and no less wonderful map editor! And finally, thanks to all the world and the Internet!

1.0
First release
1.1
- Modernization of MT-15 (minesweeper): Now instead of the normal repair capacity sweeper capable of running two repair bots that repairing buildings, equipment, and are able to self-destruct and harm enemies.
- Modernization of the Mi-98N (helicopter): Removed a useless ability to detect invisible mines, instead of the helicopter got the ability to run fully automated flying unmanned probes that are automatically fired, flying close to the helicopter.
- A new combat unit: Pyro - severe infantryman, is available for hire and to complement
- A new combat unit: Field Engineer - repairing buildings and equipment available for hire
- The new commander's ability: an airstrike - a challenge of three fighter-attack aircraft for missile attacks on the fortified points of the enemy.
- A commander's ability to "fix" is replaced by the ability of the "Iron Curtain", which makes the headquarters temporarily invincible.
- Commander's ability to "shelling" and "A neutron bombardment" Now do not harm the Allied troops, the range of uvelischen.
- Now on a map will appear in a variety of bonuses: repair kits energobronya, extra money, the tide of courage, protection, etc.
- For basic infantry for the sale set the same price of 12 coins, and greatly reduced the replenishment interval.
- Fixed several minor bugs and flaws, and eliminated leaks in the code
- Other more minor changes ...
1.1b
- Modernization of the ACS-250: infantry, suffered from the burst of a shell gets concussion
- Damage to the MT-15 now goes to the splash
- Refined kommandirskaya ability "to neutron bombardment, now works much better
- Fixed bug with discharge capacity of the shelling, if you use another power
- Fixed bug with nenachisleniem money for treatment by a blue player
- Fixed a few minor flaws
- Other smaller changes
1.1c
- Fixed a bug with the ability of an airstrike in which the aircraft returned to base and hung out there
- Fixed another bug is not pleasant to the ability of an airstrike in which the aircraft did not attack the towers, which were restored
- Refined the ability of an airstrike, and now the upper and lower planes of the unit will attack the headquarters, if the towers they need to fire have already been destroyed
- Changes in the balance: increased performance of combat vehicles, increased the damage from mines
- Changed the icon for the ability to "treatment" of nurses and other smaller changes
1.2
- Completely redesigned and terrain maps, map now has a much brighter and more fun! A smile just became a little more space on the battlefield
- Ability to "neutron bombardment" is now paid, but reusable
- Added a new feature in the form of ability to change combat vehicle directly in the course of battle without the loss of
- All abilities in team headquarters now requires energy (mana to use), Mana is gained by tanks
- Because with this added bonus of a new "Energy", which provides 20 units of Energy Headquarters
- Fixed a bug with the ability to "mining": one minute of blue appeared on the general meringue kasnyh
- Dobavaleno on both the base of the building, "Economic Center, which now investigate the financing of new and improved" Power Generator "
- Many small changes have concerned the balance
- Changed the preview picture
- As well as other smaller changes
1.3
- A new combat vehicle BTR-100 (for the idea of creating osoboaya thanks Eligreen'u) provides armored vehicles for the infantry, armed with light automatic gun, has the following abilities: a volley of grenades, the transport compartment, and retaliation (aura)
- Two new bonus
- The opportunity to buy energy for the staff in the economic hub for the money
- Improved ability to "cure" for nurses, now every third treatment will evenly distribute the incoming damage between soldiers
- Improved ability to "smokescreen" for ACS-250, now the troops have fallen under the veil of strongly lose in velocity
- Fixed a glitch due to which a few specific cases nenachislyalas energy player for murder
- Tank T-122 can no longer shoot at close range
- Some more minor changes (changed the icon in the helicopter, the runes are colored and many other small things)
1.3b
- New komandirkaya paid superpowers "Satellite Strike, available at headquarters
- A new kind of infantry, "Field Medic" is available for purchase
- New bonuses, giving soldiers free
- Fixed bug with charge of energy blue player
- Fixed a glitch with the player Authorit accrued energy for the murder of his troops
- Held a small hand-optimized code card
- Other smaller changes
1.3c
- The tower is now a player not give khalyavnykh gold for the killing, now they belong to the allied player, computer controlled, and improved towers with special abilities, added to staff
- Increased speed self-propelled projectile ACS-250, is reduced in half as a bonus attack BTR-100, landing marines in the transport compartment, splash a little weak MT-15
- Funding will be repaid a little more
- Fixed errors in the text, added instructions for BTR-100 in reference
- Fixed a few minor flaws, a few visual changes, optimized some ability
- Team building staffs push back the enemy base with respect to one cell tower just relegated back and forth to each other on a single cell, the improvement of laser rangefinders trimmed on one level - it's all been done to suppress a bug where infantry stalplivalis in the aisle is not fired at the enemy HQ
- And other more minor changes
1.3d
- Fixed a bug, and gaps in the modernization of defense when it was impossible to restore the tower or the ability to use the tower already in the process of improvement, which led to a waste of coins
- The Economic Centre added a new possibility of earning gold rubles per click
- Removed the study of fortifications, towers, all types are now fortified armor from the beginning
- Other smaller izmneniya, such as: increased number of levels in the study of guns and power generator to 1, reduced the charge paid team abilities in 1 minute, by changing the combat vehicle, the plant will be selected automatically, etc.
Keywords:
Support Tank
Contents
Reviews