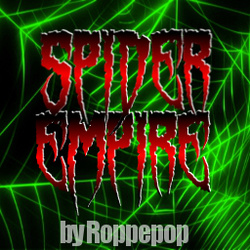 This is my fast-strategy map "Spider Empire".


Description & Gameplay
In this map you are a Brood Mother - a lord of a spider empire.
You can lay spider eggs which hatch into minor spiders.
There are different types of spiders.

War Spiders can fight against your opponents.
They can upgrade several times while fighting to become even more powerful.

Brood Spiders are able to lay additional eggs to further enlarge your army's size.
However, they are not able to attack and can't upgrade into bigger spiders.

Your Brood Mother is a heroic spider and can level up when killing spiders of your opponents.
It has got different attributes to skill so you are free to play your own style.
It is the commander of your empire and can build important structures to defend your base or to upgrade your empire.

There are Obelisks all over the map.
They increase your gold income if you capture them.
But once captured you have to defend them from other players who want to do the same ...

To win the game you have to overtake all empires of your opponents which is possible by killing the opponents Brood Mother.
They will then fight for your empire as a vasall.
If you overtake a lord who already got some vasalls you will overtake all of them, too.

Credits are given ingame & map is protected.

This map is fully coded with vJass and hashtables are used - it won't work for Wc3 versions older than 1.24!