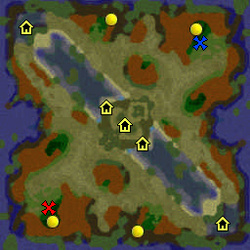 I have swapped the Tavern out with a Goblin Laboratory to keep the symmetry precise.

Removed some trees at expansion.

- 1.5
More anti-air for creep camps
Added critters
Re-added all trees to have mostly no gaps
Added a path in the middle of the map (look at new picture for reference)
Changed some drops on creeps
+1 Tavern +1 Marketplace -1 Goblin Merchant
Previews

mafe
This is not a bad map, but it is quite far away from what is needed to be of ladder quality. There are several choices that will make the map imbalanced/problematic in a competitive: -No tavern. -Some itemdrops are debatable: Creep camps in the lvl...
Read full review...
Reputation Statistics
Show Ignored Content