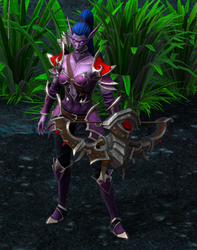 This is the upright Shandris model from the Beta. I am including the portrait although it looks almost the same, but with weird different lighting that was kind of, in my opinion, improved upon in the Reforged release version.

So this model would be good for some RPG with a closer-in camera, potentially. It's up to you to discover a fun way to use it!

I used this model in a late-night weekend project one time a while back, where I tried to use this model as the hero character in a Diablo 2 style RPG map (as shown below):

It also looks like this version walks more slowly than the release version. The animation speed is not the same. Also, for the record, the Hive requires a description of 1000 characters which I did not reach yet. But a picture is worth a thousand words, they say! So please click the View in 3D button if you're really seriously interested in how this model appears.
Contents
Reputation Statistics
Show Ignored Content