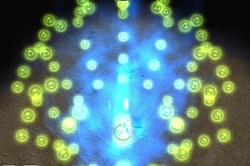 This is A recreation of yet another ff Boss spell casted by kuja: 'Seraphic Star' he didn't have this in ther origional game however he recieved it in the later ff game final fantasy dissidia.

The main idea was to recreate it's effect rather than appearance as apperance would take far too long and would probably cause mass lag from over sfx.

For a basic outline of what it does, it Creates a projectile, This projectile moves to the target point, It then grows. during this proccess it is using 3D Gravity to pull in all nearby units into it's centre.

After bursting it's boundaries it will explode causing 3D knockback on all units within it's area which is also calculated in 3D.

No damage or effects (stun and suchlike) are caused via custom data, the only use in the object editor was the casting spell and the dummies required.

Many aspects of this spell are changed per level and has a very confusing set of triggers for some people so as large amount of documentation has been added saying what you can/shouldn't touch. Uses the hashtables and relies heavily upon them.


changelog
v1.36
Just noticed that in an experiment I was doing a long long time ago I accidently left it there without removing the remnents of it, hence this upate which changed it from 'unit starts channeling' back to 'starts the effect of'
man the an embrassing mistake >_>'
V1.35
Added ultimate version with extra eye candy
Fixed a leak
Lowered amount of general lag by changing the sfx model
Now there is 0% chance of getting killed.
Added alot of documentation about modifing the ulti version.

V1.15
Minor Changes
Fixed the 'sfx but no moving' bug
Loop now turns off when not in use
Compacted the death replace trigger


Now it has an ultimate version.

Give me Credits if you use this spell in your map plz.