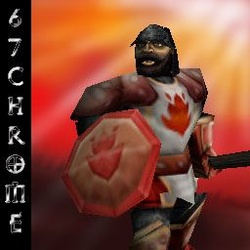 Turns the bandits into scarlet crusaders. Always wanted to have a few on a few of the maps I was working on, and I finally got around to making a skin for them. Based off of the Scarlet Crusaders from WoW.

Only thing that is not freehand is about half of the face, I primarily added things on to the old one, I don't think the forehead changed at all, and I just moved the nose over.

Based off of the Scarlet crusaders from the death knight starting area (screenshot included).

The shield spike is now affected by alpha channels, but will not become invisible unless the unit's vertex coloring has been set to 1% through triggers. This can be accomplished under the triggers frame by going to Animation->Change unit Vertex Coloring. This is a good thing, because the same texture that is used for the shield spike is also used as the spearhead for the brigand model. Setting a unit's vertex coloring only effects the units the trigger specifies, and not the skin itself - so the bandit crusaders can have no shield spikes in the same map that the brigand crusaders have spearheads.

Moderator
12:57, 10th May 2009 Hawkwing: The Scarlet Crusade insignia could use some work and the shoulders, shield, and tabard need more definition. However, the quality is definitely good enough for approval it works flawlessly in-game.
Read full review...
Reputation Statistics
Page 1 of 2
Show Ignored Content
Page 1 of 2