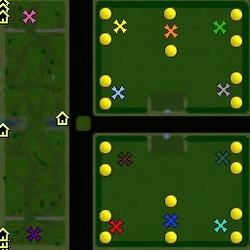 This map is just like the Builders And Fighters, but you have no fighter, and, it´s in the old times in Japan, you are Samurai, you can also have a Hero, ok... This descreption is not good... you can test the map if yu want and then give me feedback so i can make it better, the map i quite fun actual.

Thanks to Black_Stan for his samurai models.

I have moore to come whit the other version, moore Heroes, and some custom spells, custom items, and maybe what you think is missing...

Update 1.1
-Fixed the attack bug.. the units is walking back to the main base, and blocking the gate. Now they don´t do that any longer.

Update 1.3
-Fixed walking bug.. the units turn back sometimes but they cant go back to there main base
-Fixed Loading screen

Update 1.7
-Changed modelfile on some buildings
-Some Heroes has custom Spells
-Made them attacking in a better way

Update 1.8
-Units can't flee back to their base

Moderator
23:18, 27th Feb 2009 by bounty hunter2: A map with a very interesting idea. There are some issues to deal with that can be found in my full review. Pending with a 2/5 rating. Seems that you still didn't update it. So I'l reject it until you update...
Read full review...
Reputation Statistics
Show Ignored Content