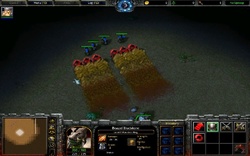 This is my second "working" uploaded spell on THW. The spell is 100% MUI and Leakless. Removed all Locations and Destroyed Groups & Special Effects.

Please give Credits on usage. The look of the spell is... Okay but i couldn't find any way to start the lycans Move animation because they're moving forward, throught a action, and when that is done, the Lycans will immediately starting the "Stand" Animation type.

Code
RotL Init
RotL Loop (Initially Off)
The MUI is made throught Indexing.

Creator & Idea: tjordell
Thanks to: Underworld, Rise of the Lycans Movie (where i got the name from xD).