Ringwraith Pack (War of the Ring) 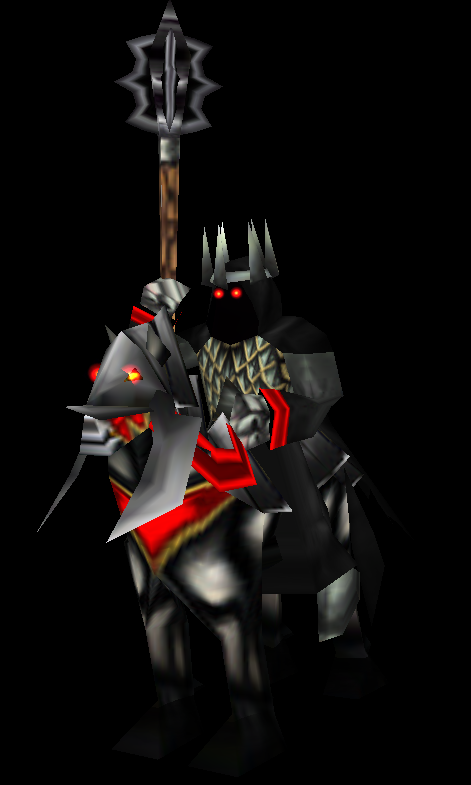 This bundle is marked as approved. It works and satisfies the submission rules.
View usage Statistics Legacy download
Reactions: Harry Sonford, FeelMyRash, Jab1z and 3 others
"Open in the name of Mordor!"
- Khamûl the Black Easterling

Author's Notes
The Black Rider and (slightly outdated) Khamûl both have mounted and dismounted animations, thus the despicable filesize. Since there is no regular horse skin in Warcraft III, I could not make the horse look like a black horse, so the Slavemaster/Warlord's horse will do.

I recently learned that the Ringwraiths are not undead, they are still alive (Holy shit!) Like Bilbo, the Nine obtained unspeakably long life. Unlike Bilbo, they were directly "changed" by Sauron, and they became such unnatural beings that their very presence instilled a primordial fear in friend and foe alike over the sheer wrongness of their existence. 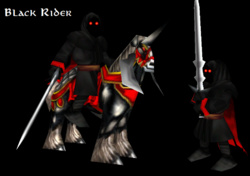 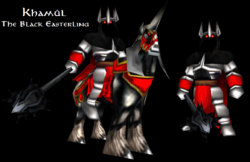 Models 6
The Black rider is fantastic, and its nice that both of the models is made only with ingame textures, but something with Khamul is unsettling for me:
The armor could use a darker texture to fit with the Dark robes and the theme (maybe that is just the concept though), and he is way too short, looks like a dwarf
Maybe give him more slower attack animations, such fast animations with the mace looks odd
Also, why the models look "stealthy", for the lack of a better word, in the On foot animations?
Also spell effects for spell animations would be nice
Last edited: Jan 31, 2019 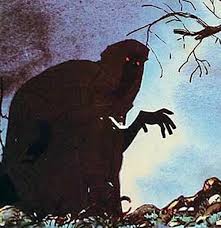 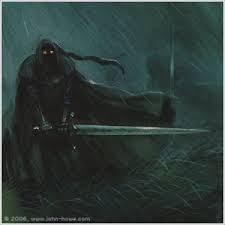 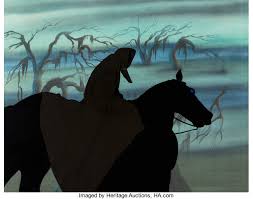 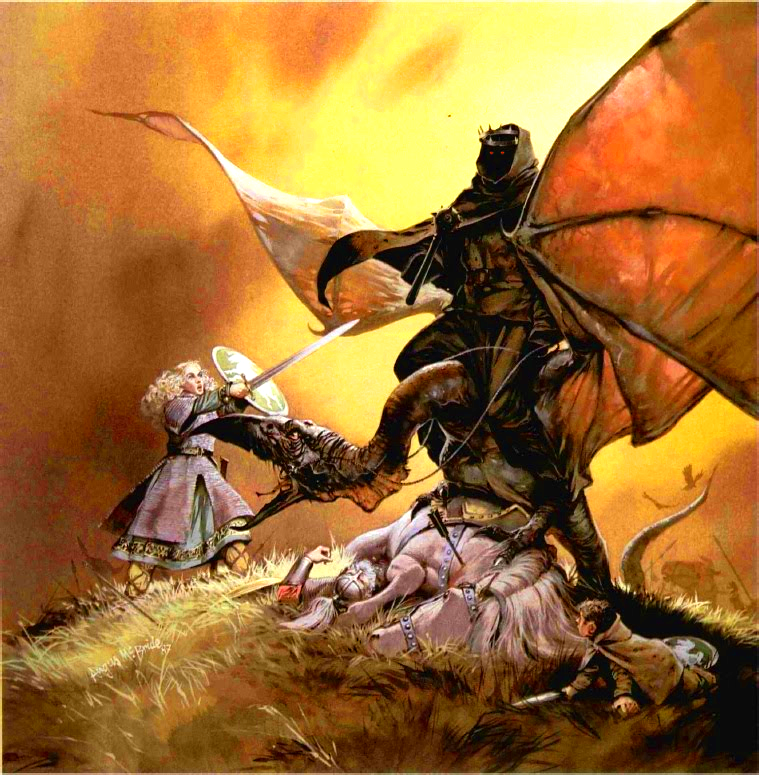 HerrDave said:
How does he look short? O-o
Click to expand...

I don't know how to put it really... his proportions look small compared to, for example this Nazgûl (maybe because that one has robes), It is especially noticeable in the stand alternate (on foot) animations, might be because his WC3ish proportions though, but i think WC3 proportions don't fit him in this case...dunno.
Last edited: Jan 31, 2019 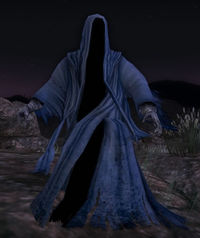 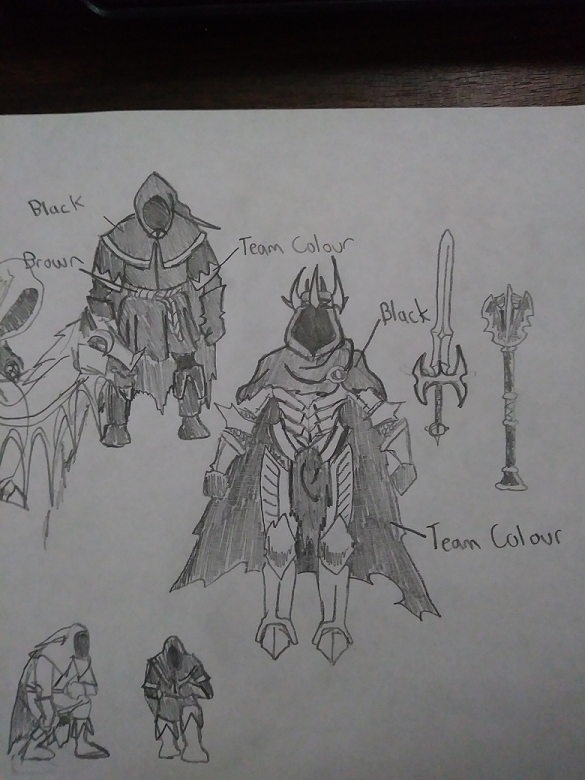 I could upload more concept art like this for each model I work on, but I don't want to take up people's bandwidth

I could upload more concept art like this for each model I work on, but I don't want to take up people's bandwidth
Click to expand...

I think that my proportions problem with khamul probably stems from the alternate animations, and looking at the concept, his body should be a bit taller
The armour, like i said, should use a darker colour/texture
Also, according to the concept, maybe the armour could be changed to something like the armour of your Numenorean soldiers, that will definitely make it better.
Or, probably you could just give him a robe.
Edit: i also found out that the cape clips with the horse in attack -2
Last edited: Jan 31, 2019


One ask: The Death Knights (specially from Warcraft I ) is based on Nazguls?

Models 22 Icons 1 Skins 1
Oooh i like these cartoony boys, Dave, a question: What you making all these models for? I mean Im seriously not complayning, just like, you have so many ringwraiths from every incarnation now that its even hard to choose what one to use! Is that for the sake of every itteration or something like lotrO where you go around the eras?


One ask: The Death Knights (specially from Warcraft I ) is based on Nazguls?
Click to expand...

I'd say the wc3 versiosn are more akin in role than the ones in wc2. They have a limited number, tend to be made of powerfull knights and carry around magical runed swords that hurt your soul. Also their leader is some sort of lich king.

The wc2 ones were more wizard like, but in appearance they do have more similarity. Wc1 had necrolytes tho
Last edited: Feb 1, 2019

Models 2 Skins 2 Maps 9
What happened to the Witch King and their horses? They are supposed to be black aren't they? :-/

Models 176 Icons 21 Skins 8 Maps 1
They were left unchanged because I get bitched at with every alteration, hence why all I did was add Retro Khamul to the pack

Models 5
I do not want to find fault, because the models are really insanely cool, but why does Khamul wear witch-king's crown, not the isterling helmet?

Models 176 Icons 21 Skins 8 Maps 1
Technically speaking, the model is the Witch-King, but due to copyright shenanigans I decided to name the model after the only other Nazgul of note, outside of LotrO names Like "The Black Blade of Lebennin"

HerrDave said:
Technically speaking, the model is the Witch-King, but due to copyright shenanigans I decided to name the model after the only other Nazgul of note, outside of LotrO names Like "The Black Blade of Lebennin"
Click to expand...

Heheh, now that is a nice move I'm glad you are striking back

The cape is clipping through horse's tail in the walk 2 animation. Not a fan of the portraits, especially the black riders' with that low res sword texture in it.

Ported Icons 60 User Interface 3 Sounds 6
Now we need the Fellbeasts that they ride on the movies if you know what I mean.

thats the cutest design for the eyes lmao

Models 11
Nice Animations...
You must log in or register to reply here.

Troll Pack (War of the Ring)

Uruk-Hai Pack (War of the Ring)

Orc Captain (War of the Ring)

Nature's Haven (War of the Ring)

Faramir (War of the Ring)