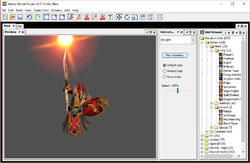 This is Retera's Model Studio v0.03 Public Beta. It is not finished! But it is something that works and is better than the Matrix Eater application, and is compatible with Patch 1.31.

Retera's Model Studio is the second evolution of the Matrix Eater project. It is a standalone MDL and MDX model editor. The project has diverged from the Matrix Eater that is available here on the Hive, and become a different program with features that do not totally overlap -- although my goal is for this to entirely replace the Matrix Eater.

Personal note: On the Matrix Eater application, I left a note where I said:

I really wanted to revamp this program and add new features and write a tutorial before I uploaded it onto the Hive, but I just haven't had time recently, and I want to stop sitting on this updated version because it has several internal fixes that should make it less likely to save buggy MDX models and so I feel the community deserves this new version in case anybody is using the program -- regardless of whether I end up getting the time to improve it to match up with my dreams or not.
Click to expand...

This application does not solve that concern of mine. I am not uploading this as a finished product. But as we have seen with Patch 1.31, some times, software is pushed into production when it isn't ready. That is the case with this application. I want more than I have. I just can't stand not to share with the community what I have anymore, because I feel a deep sense of guilt for anyone who is using the Matrix Eater application and forcing themselves to mod on Patch 1.26 or some nonsense, while the above application existed on my computer and has for almost a year.

I believe in the power of open source, and this application is entirely open source. I have been developing it for about two years since the Matrix Eater was posted, and it has evolved out of the same codebase. This is the same GitHub link that was included on the Matrix Eater program, but it now contains the source for Retera Model Studio:
Retera/JWC3
Contents
Reputation Statistics
Page 5 of 11
Show Ignored Content
Page 5 of 11