So this is a female Na'vi skin, the blue people in James Cameron's Avatar.
It represents an archer hunter, clothed with pieces of tanned animal skins, decorated with the hunter's dye.

She is armed with a bow cut in the wood of a pandoran green tree.
The cord that bends the bow is made of liana.

The cape is made of attached leaves, for camouflage in the jungle.
They are slightly tainted with their clan's teamcolor. Some of them were bathed into it to show a line of clear TC.

Ears were shortened and given a wooden earring; all the material i didn't find useful was removed; everything was freehanded except the very small parts that i still don't know where they can be seen, and the arrow.

There is no CnP, no recolor.

Don't hesitate to point out all the bad things, i still need alot of advice for skinning 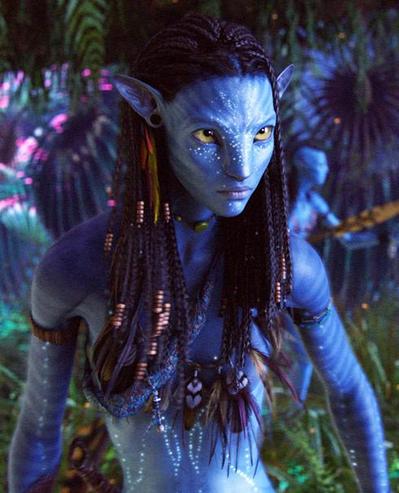 EDIT:
Skin updated with GIMP, now with alot of shading and highlights and stuff.
Also changed the pattern of the boots, and added the bright dots on the face.

EDIT: 4.0
Remade the whole skin (except bow) with much thinner body stripes, better shading and highlights, more muscle reliefs, improved clothes, more details, and bioluminescent dots on all parts of the body. Removed the black lines between zones.

EDIT: 5.0
Totally remade the bow and the cape, added even more shading and highlights about everywhere, and other minor improvements.
06-07-2010: screenshot updated.

EDIT: 6.0
Totally remade the eyes from scratch. Improved their placement and transition to the nose.
Remade the TC leaves on the cape from pure alpha, for much better visibility.
Refined bioluminescence dots (no longer 1 pixel), removed some of them, aligned them better, shaded them consistently with the surrounding shadowing.
Refined shading & highlighting in details for eyes, nose, neck, stomach, arm, leg, middle cloth, shoulderpad, bow handle.

Moderator
18:10, 4th Jun 2010 67chrome: The thick, black outlines around most of the details make this skin look incomplete and cartoonish, I'd strongly advise removing the outlines outright and use shading and highlights to create the distinction between...
Read full review...
Reputation Statistics
Page 4 of 5
Show Ignored Content
Page 4 of 5