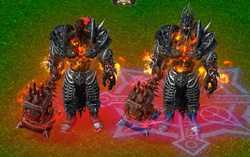 Bolvar Fordragon is the Highlord of the Knights of the Ebon Blade, and the former Lich King, who took up the position after the death of Arthas Menethil.Formerly a venerated paladin of the Alliance, Bolvar served as the Highlord and Regent of the kingdom of Stormwind following the disappearance of King Varian Wrynn. Upon Varian's return, Bolvar was named the commander of the Alliance forces sent to take the battle to the Scourge in Northrend.After the treachery of Grand Apothecary Putress at the Battle of Angrathar the Wrathgate, Bolvar was nearly killed by the Forsaken Blight, but was kept at the edge of life by the flames of the red dragons

Bad about model: The model has a lot of textures to import and it don't look as good as in retera studio(maybe because of lack of update orm and normal texture, I still try to improve)

18/11/2020: Add 2 version, Lich King Bolvar and Bolvar without helmet
27/11/2020: Reduce a little size of model,add lich king bolvar icon and bolvar icon,add 2 normals texture to model.
4/12/2020: Add LichKingBolvar version that can transform between fire and frost and icons(model's size is too big and has a lot of textures to import but I try the best that I can)


Give credits to Murlocologist and Mythic too if you use this model.
Previews