How to use the campaign editor

A lot of mappers would probably ask this question.

How to develop a good campaign?

A lot of mappers, even those with experience in WE might struggle when it was the first time they start creating a campaign. This tutorial would teach you how to import custom resources, how to begin with campaign editor and so on.

What is game cache?

A cache is a file that is saved on the computer thats stores the information.
The game cache can store information from one level, and load it when you play the next level.
It can save objects like a hero or character, and load them again after the level is finished.

To store a hero into the game cache, use the game cache triggers.
You will need to specify a file for saving the cache, and the hero unit.

Then to later load a hero from the game cache, use these triggers.

The game cache can also store integers, arrays and variables.
You can save the game cache by creating a trigger that says Save Game Cache (category is game cache) and leave the settings as is, and click ok.

What is campaign all about?

The campaign editor lets you make a series of maps like the single player campaigns that come with Warcraft III.

Where is campaign located in World Editor?

The Campaign editor is located in the same row as the trigger editor, it has an icon of a book.

It is also available under the Module menu.

If you want to be quicker, just press F7.

Where is the campaign would save?

If you saves the campaign inside the map folder instead of campaign folder, do not be suprise to see your campaign doesn't show up in Warcraft.

Once you open the campaign editor, the view would be like this. 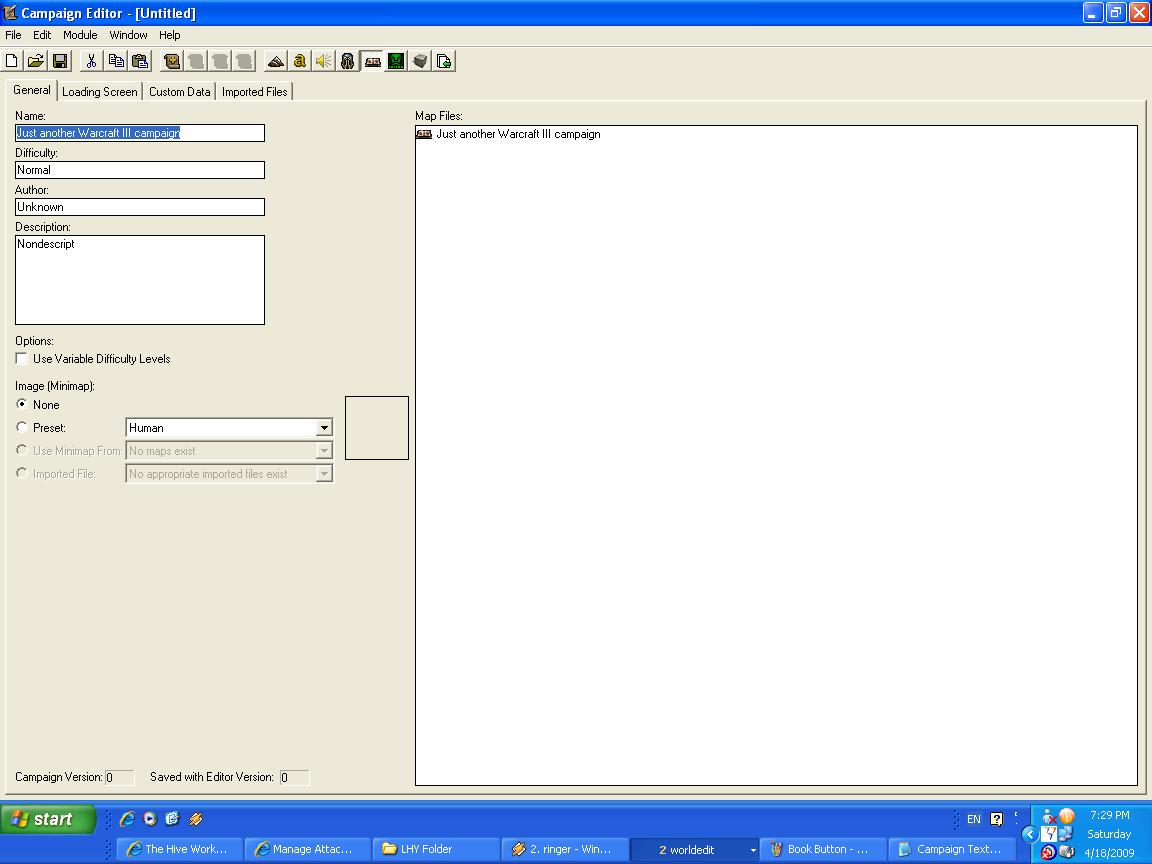 Once you manage to set everything correctly. The view would likely be like this. 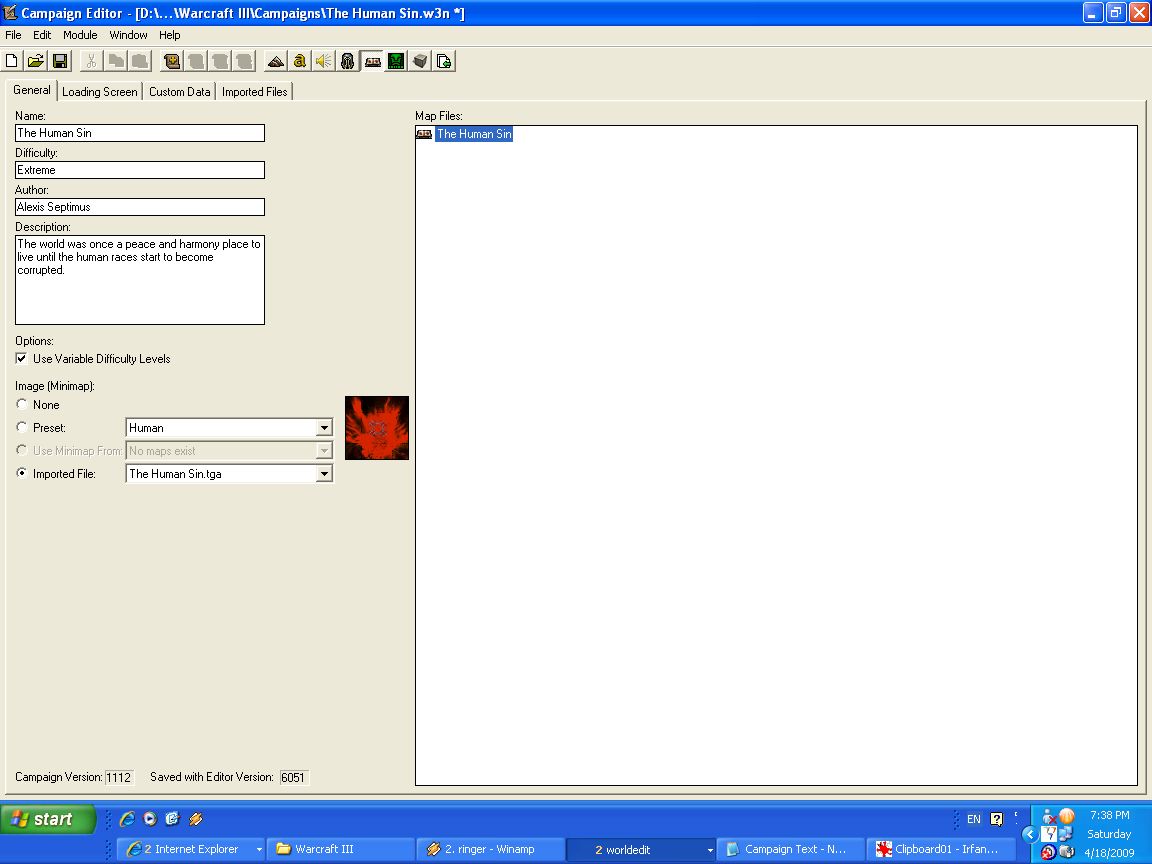 Congratulation, you have set up the basic campaign files.

Before I give further indepth on how to make campaign. There is a few thing you must take note and remember about it.

You need to have determination, you must be serious in making it. If you are not serious and determine enough. I suggest you to abolish your intention because campaign ain't like any other map. It could took a year or 2 to even create 1 campaign only.

You need to plan the storyline, units and everything. Also, make a research to see if somebody already does a familiar work or not. If you do not do so, even if you successfully develop the campaign, nobody would play it.

A introduction and epilogue is a must map for a campaign. This 2 cinematic element cannot be miss in a campaign. Sure, you can make a campaign that directly involve the game. Then again, it might make your campaign uninteresting or lack of proper information.

Epilogue is essential as well, some people would like to know the ending of the campaign. A campaign was awful if it doesn't had any conclusion.

Why there must be at least 5 map?

Well, there is no minimum number of maps necessary for a campaign, but 5 is a good number to start with. If you have less than 5 then each map should have more content to compensate. One is to introduce while another is the ending scene. A campaign file size usually doesn't less than 10mb. Not everybody want to play a campaign that consists of 1-2 chapter only or lack of prologue/epilogue, unless they are done very well.

Let me ask you, would you download a 15mb campaign just to play 1 or 2 playable map or lack of storyline? It'd have to be a very good campaign then. 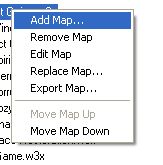 Ok, from what you seen at this image above you. You would notice 7 function available. 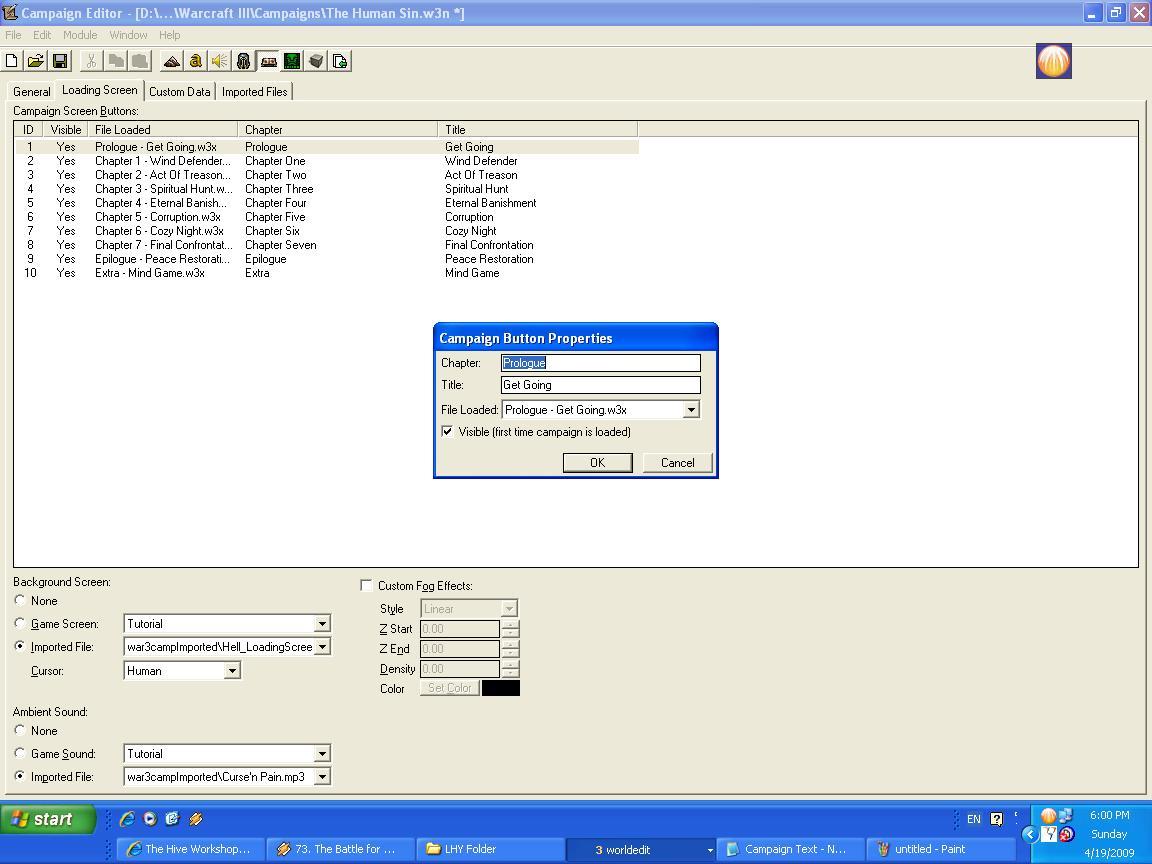 From what you view at this image above you, this is the area where you set the map according to list.


How to test a campaign 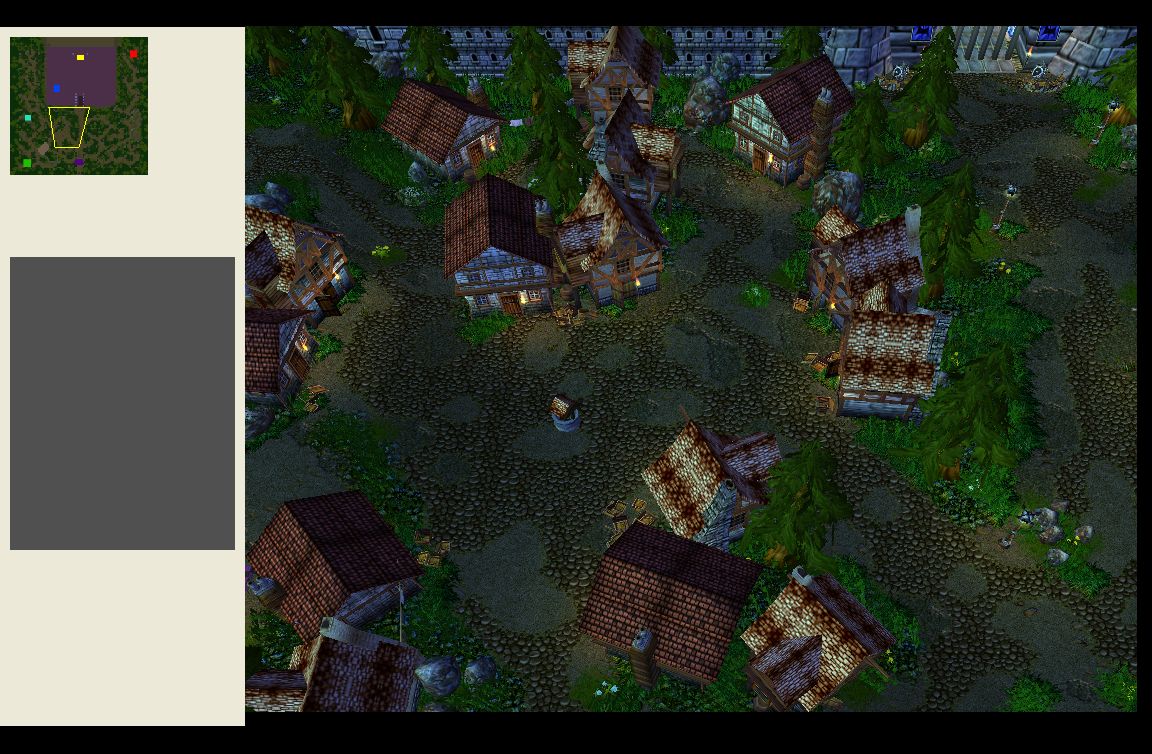 You make a awesome terrain just like this image above. But, why does it appear as a box during the test (Image below)? 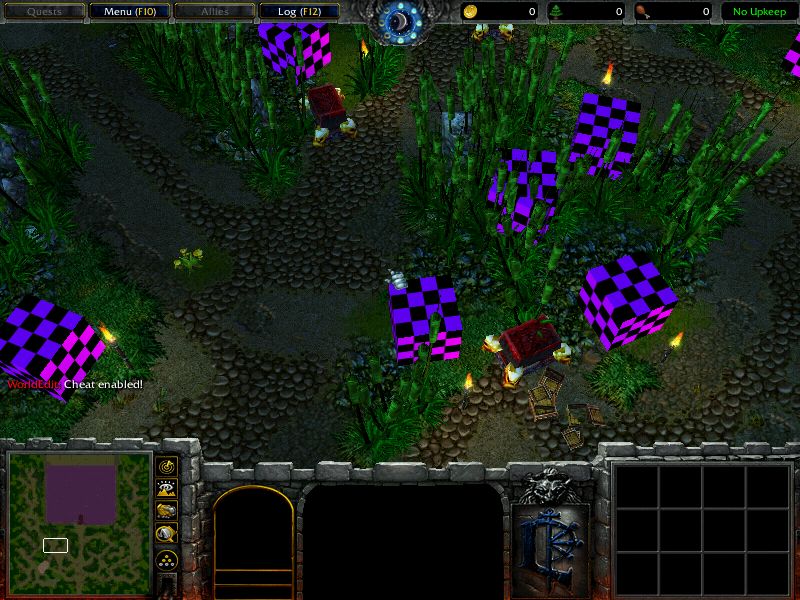 The answer is simple, you are using this to test your campaign.

Invalid model and why

Also because you will probably have more imports in a campaign than a single map, it might help to organise your models so you can find them more easily. For example, you could put buildings in "Buildings/" and effects in "SFX/".

Models 1 Tutorials 1
Disable your signature and clear the grammatical and spelling errors of which there are several, even the tutorials name is spelled wrong.
Also, Bob27 already made a tutorial like this (here), and I don't see any big need to have two of a kind at the same time in the database.

Packs 1 Maps 35 Spells 8 Tutorials 5
Bob tutorial does not cover certain topic regarding the campaign editor. This tutorial of mine provide more information.

The grammar error would be fix as soon as possible. I name the tutorial develop because it not only teach you the basic campaign stuff, but also how to make a good campaign.

Models 1 Tutorials 1
His covers the most important parts of making a campaign.

His covers the most important parts of making a campaign.
Click to expand...

From what I view, it doesn't cover a certain topic such as model import, why campaign doesn't work during the test and so on. All this would be included in this tutorial once it was done.

Models 1 Tutorials 1
His covers importing of different resources, yes. It does not cover the self-explanatory test thing, though, which isn't really hard for people to understand by themselves.

His covers importing of different resources, yes. It does not cover the self-explanatory test thing, though, which isn't really hard for people to understand by themselves.
Click to expand...

It did not explain an indepth problem of importing resources. Some model require the path to remain at war3mapImported instead of war3campImported in order for it to work.

Spells 1
how did you put those pictures?

Let me guess: the same way you use on custom maps?

Just try, if its not then you gotta ask somebody who knows

by the way, useful and great tutorial.

EDIT: PROBLEM SOLVED! Sorry for bothering... whoever. It turned out that I had too many sounds saved to the map- I just deleted them, loaded them onto the campaign, and then reinserted them into the map.

I'm having trouble with my campaign... I created a whole big level with a lot of detail, triggers, etc., but when I went to put it in a campaign so that I could make the next level, the first level would not play from the campaign menu. I would click on the button, and it would fade out from the campaign menu, but instead of going to the level loading screen it would just go back to the campaign menu. I tried adding a basically blank map, and that one ran fine. I tried copying the map that wasn't working, renaming it and then adding it to the campaign, but it wouldn't play, just as before. I then sytematically began destroying everything I could think of in the copy, in the hope of finding the problem, and it doesn't seem to be triggers. I also deleted every doodad and unit, but nothing. The blank map that I added had all the custom objects that the other did, but still worked. I also don't think it's the imported sounds. If anyone has any sort of idea, it would be appreciated.
Last edited: Sep 6, 2009

Packs 1 Maps 35 Spells 8 Tutorials 5
use gamecache if you want your map to load to the other one upon completion.

Models 1
can a campaign be multiplayer?

Septimus said:
From what I view, it doesn't cover a certain topic such as model import, why campaign doesn't work during the test and so on. All this would be included in this tutorial once it was done.
Click to expand...

I would like to say my opinion,
i agree whit Septimus.
This does cover the most importand; prolouge and epilouge,
i cant see that in bob27's.

But still both are usefull.

punkfood said:
can a campaign be multiplayer?
Click to expand...

Simple answer: No.
Long answer: Yes.
It can be, but not by using the campaign editor, it would more be a line of maps hosted after each.

Maps 1
very good!!!
I learned many new things. thanks^^

I just wanna know if I can add video to load after or before a map, can I do that and how, is there something special that I must do?

sigmaceti said:
I just wanna know if I can add video to load after or before a map, can I do that and how, is there something special that I must do?
Click to expand...

If you have your own video, you must convert it to AVI and then the user must download it and put it into their Warcraft III/Movies folder. I wrote a somewhat detailed guide on it here:
http://www.hiveworkshop.com/forums/2390249-post11.html