What is this project?
Hive’s Battlefield is an AoS map which is currently under constructions.
The map is based on the fact that heroes are featured as community members.
By this members have the ability to reflect themselves in the form of a Warcraft III hero.

The map exists out of four lanes. 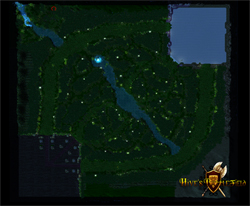 Creeps on both sides will push in waves to the enemy in order to gain victory. Heroes will support the creeps in their victory.
Beside this (the main mode), we are also planning to add other modes.
More terrain screenshots can be found here.

Now, let's continue with the tour.
I guess the main information has been revealed so let's start with some system which we'll use.

Featured Systems
Warcraft III can be edited more than regular users know. And we are going to take that advantage.
However, we will take note to create “easy” systems, making it understandable in game for the so named “newbies”. Systems which we’ll probably going to include are:

This information is outdated. I will update it asap.

[Defense / Survival] For The Fallen I Must Put Down