This tutorial will teach you to:

Welcome to the wonderful world of Inverse Kinematics Animations. In this tutorial we will learn the basics of setting up an IK rig to animate like the badass boys actually do.
Before getting started let´s have a discussion.

First, what’s IK? What is it used for?
Normally we have two ways to represent motion in skeletical animations. The first is FK, which I already taught you in the Basic Animation Tutorial. However, there´s also another method which is called IK!

FK stands for Forward Kinematics. It means that you animate from the highest parent to the children. In IK, it’s the other way around. We animate the children and they affect the parents. That’s why IK stands for Inverse Kinematics.
Let me show you an example. Let´s say we have a leg and we want to flex it.

In FK we would do this:

A lot of steps and it´s not even perfect!

However, in IK this is all we have to do:

So why did we learn FK before IK? It's quite simple. It's like learning to understand poems without knowing how to read. Learning FK is the very basics while IK is a complex system built over FK. If we understand FK we understand IK afterwards.

Also not always IK systems are the solution. Sometimes we may do things in a FK manner because it's easier to animate that way. IK is just an abstraction.


Section 2: Setting up the Scene:

We will start from the end of section 2 of my Basic Animation Tutorial. Link
The idea is to make an IK rig instead of a simple FK rig.

You can get the start file here:Start.max

Okey first things first. Open the file, or in case it's not compatible with your 3ds max version, follow the Basic Animation Tutorial until you finish section 2.

Note for GMAX:
GMAX does not have a layer manager so skip anything refering to it. It's not needed but it helps organize the scene.

Now select the mesh and go to the layer manager.

Hit create a new layer and call it Meshes

Perfect! Now we can work on the bones.

Select the bones on the left and change their color to red so we know they are the left bones.

Do the same for the right bones but with blue and make the rest of the bones green.

We are now going to setup the scene's orientation so we always know where's Front, Back, Left and Right. (this is perfect for animating in one viewport)

Create 4 Texts in the Viewport with the names Front, Back, Left and Right and place them where they should go.

Go to the layer manager and create a Layer for the 4 Texts called "Orientation". Afterwards Freeze the layer.

Important! If you look into the layer manager there's a parameter with a check. The layer that has a check is active layer. Any objects you create will go to that layer. Make sure to check the 0 (default) layer always. To avoid autohiding or autofreezing of anything you create.

With this we have set up our scene. Now that we have organized ourselves, we can start making the IK

Before we start rigging be aware that if something is done badly. You can ruin your scene. So ALWAYS keep a backup. There are some rules for IK rigging:

There are 4 types of IK Solvers:

Constraints can limit an object's transformations to follow an specific behavior. They are quite useful for animating.

There are 7 types of Constraints:

Okey so let's get started:

The first thing we should do is select the top bone of the legs. Now go to Animation -> Ik Solvers -> IK Limb Solver and select the bottom bone.

This sets up an Ik system for that bone chain.

Test it up! move the solver around and see how it goes!

Remember to undo the actions as you test.

With this we have set up an Ik solver to our left leg. Now we need to make our manipulators which we will use to animate and control the Ik system.

Go to Creation Panel -> Shapes -> Rectangle and create a rectangle for the foot. Call it "Manip_Foot_L" and color it red. Yes RED, I love red xD. Just kidding.

Now link the solver to the manipulator.

Now we will create a manipulator for the leg which will control the knee's orientation.

Go to Creation Panel -> Shapes -> Circle and create a circle. Call it "Manip_Leg_L" and color it red.

The next step is important

Align the leg manipulator to the second leg bone. make sure you are aligning it to the pivot point. In order to align an object do: select the object click Tools-> Align, Pick the middle bone and set the X,,Y,Z position on and match pivot point with pivot point.

Link the Leg manipulator to the foot Manipulator:

Save here just in case something goes wrong.

Select the IK Solver, go to Controller Panel and roll down until you find The Ik Solver Target option. Pick the Leg_L manipulator.

Ok now the last thing left is making sure our Foot bone always faces the same direction as our Foot manipulator. For that, we will use Orientation Constraints

Select the Foot bone and go to. Animation -> Constraints -> Orientation Constraint then pick the Foot Manipulator.

Oh shit, it moved! No worrries, the bone is just facing the exact orfientation of the manipulator but we want to keep the bone on it's original orientation. To fix that, it's simple.

Select the Foot Bone and go to motion panel, roll down until you find the orientation constraint section. Turn on Keep Initial Offset

Looks nice, isn't it? easy to work now with legs.

Now repeat the same process we went through for the left leg on the right leg.

Rigging the arms is just like rigging the legs. They are both limbs, so it's quite the same process:

The difference here is that instead of using a rectangle for the hands' manipulator, I used a dummy(found on Creation Panel -> Helpers). You can use anything you want. Just use a shape you feel comfortable with:

Now do the full process for both arms:

The head is a bit tricky. We want the head to follow the chest but at the same time we want the head not to be reoriented. In order to achieve this we need to create a manipulator for the head.

Start by creating a circle and align it to the head bone. Call it "Manip_Head" and color it green.

Now link the Head manipulator to the chest bone:

Now apply an Orientation Constraint from the head bone to the head manipulator. Rember to turn on the option Keep Initial Offset

The last step is important. We don't want to manipulator to inherit the rotation from the chest. So select the head manipulator and go to Hierarchy Panel -> Inherit. Turn of all of the rotation inheritance.

we are done with the head now.

All that's left is creating the body manipulator which will control all the rig.

There we go. Congrats, we finished the rig!

Now we need to organize our scene.

Select all the solvers and create a layer for them.

Select all the manipulators and create a layer for them.

Select all the bones which are affected by IK Solvers or Constraints and make a layer for them.

Select all the bones which are NOT affected by IK Solvers or Constraints and make a layer for them.

Now you can skin the mesh! For that refer to:
Basic Animation Tutorial: Skinning

Here's the setting for skinning up the mesh. In this setting, you'll be able to select the mesh and the bones and, at the same time, ignore the solvers and manipulators:

You can also test the rig if you want.

Animation using this rig is just as usual. Just that this time we won't animate the Ik affected bones directly but instead we will animate the manipulators.

Set up your scene this way to animate like a happy kid:

Now you can animate normally. If you read through my animation tutorial, the rest should be easy.

Here's an example done in less than 5 minutes:

Here's the GMAX sample. Also made quite fast:

NeoDex since version 2.3 can export IK systems naturally. It does not, however, support all the constraints and Ik Solvers.


For exporting, you don't need to worry much. NeoDex will automatically convert the IK System into an FK system on export. It will do it with the most accuracy possible and producing fewer keys than other exporters.

Models 5 Icons 1 Tools 1 Maps 1 StarCraft II Resources 1 JASS 2 Tutorials 3
Well I finished writting it. I think it can be moderated now, atleast in case I missed some typos or anything.

So select the head manipulator and go to Hirarchy Panel
Click to expand...

There we go. Congrats, we finished the rig!

Now we need to organize our scne.
Click to expand...

Models 5 Icons 1 Tools 1 Maps 1 StarCraft II Resources 1 JASS 2 Tutorials 3
okey fixed those typos and some more. I aslo, took the time to revise the grammar and the spelling of some words.

Models 7 StarCraft II Resources 1 Tutorials 2
Good tutorial, it's easy to follow. I'll test this on a flag or in something else, I can't animate an unit properly, even with this method..

Anvil said:
Good tutorial, it's easy to follow. I'll test this on a flag or in something else, I can't animate an unit properly, even with this method..
Click to expand...

To animate properly, you need to practice. This "method" just makes most things a LOT easier.

In the case of a flag, you can do 2 things. First: use an FK bone chain and animate all the bones at one. Second: use an spline IK. 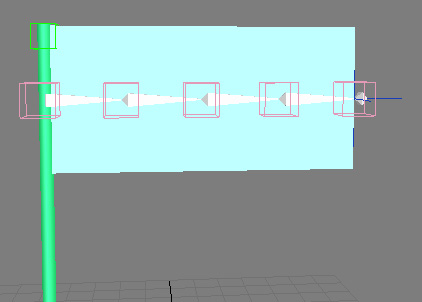 and this is how easy is to animate it:

Icons 1 Tools 1 Spells 4 JASS 4 Tutorials 9
It is a very nice, informative tutorial. Modeling is not my forte and unfortunately I cannot test the guide out myself, but I'll take your word for it.

Looks complicated but quite simple. So I don't need to animate each bones for some epic movements. I remember a couple months ago I watched an IK tutorial in youtube and it works great. Then I started to forgot and lost the link. Glad now I remeber how to make it again by this tutorial. Thank you BlinkBoy.
You must log in or register to reply here.

Does Neodex not export animation with IK properly?

Yes you can! Making nice animations on GMAX with NeoDex 2 & IK!

How to make a custom animation!