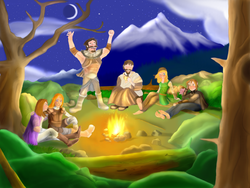 Credits
I have found a lot of wonderful models in The Hive workshop that has really helped this game to come to life..!
..It really wouldn't be the same without them... I thank you all so so much!!!

Here are the unit models

Soon i shall add the doodad models

StoPCampinGn00b
Moderator review raised to 4/5 based off of deepstrasz's 2017 review "A somewhat nice JRPG touch with quite a large grain of visual novel. [...] Overall a neat experience however quite slowly progressed and monotonous at times."
Read full review...
Reputation Statistics
Page 1 of 3
Show Ignored Content
Page 1 of 3