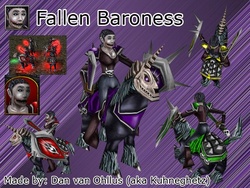 This is the mounted version, where she rides with a unicorn risen from the dead.

Model and texture facts:
The Baroness and sword was done by scratch.
Horse/unicorn was based on Chaos Warlord.
Shield was based on Chaos Warlock.
The main model uses Chaos Warlord animation with a custom dissipate and a built-in non-talking portrait.
An external portrait model is included (with animations from the Bandit portrait).
Texture is mostly done by scratch except for some team colors and the part on the horse's behind, which is a minor recolor.

Extra info:
An early version of this model (which was called Fallen Maiden that time) was made for Hiveworkshop's 12th Modelling Competition, but that version was rushed and had some flaws. So it was a good idea that I've improved it before I submitted the model.