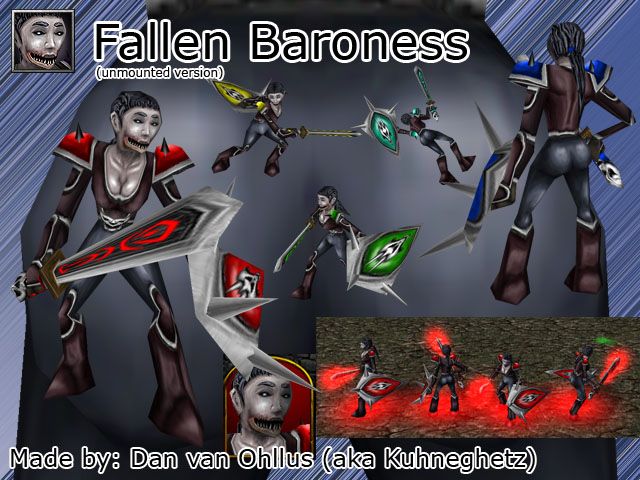 This bundle is marked as approved. It works and satisfies the submission rules.
View usage Statistics Legacy download
Reactions: PashaFenko036, deepstrasz, Am.F and 4 others
Fallen Baroness

This is the unmounted version, where she doesn't use the Fallen Unicorn to move through different places.

Model and texture facts:
The Baroness and sword was done by scratch.
Shield was based on Chaos Warlock.
The model uses Demoness animation with a custom dissipate and extra transferred animations.
An external portrait model is included (with animations from the Bandit portrait).
Texture is mostly done by scratch.

Icons 1 Tools 1
Nothing is perfect, shamanyouranus.

If people don't understand what shaman talked about in the bolded part, the model includes an extra animation that I added for shits'n giggles.
Last edited: Jul 6, 2009

Icons 19 Skins 4 Tutorials 4
I don't really like the face. It doesn't look like something from warcraft to me.

Dan van Ohllus said:
If people don't understand what shaman talked about in the bolded part, the model includes an extra animation that I added for shits'n giggles.
Click to expand...

Y, the entice animation kinda made me laugh

What do you mean by that?

I always test my models ingame to make sure that everything works.
Maybe you had an incomplete download or something.

cool Model, She looks like a vampire but still, I love it!

I like the model but I think the face looks super goofy. The entice animation made me crack up.

Sounds 12
Cool!
You must log in or register to reply here.