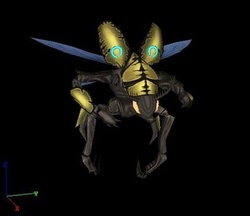 The Drones, commonly known as "Buggers", are a swarming insectoid race featured in the Halo series. While very fragile, they can easily overcome their enemies through sheer speed and numbers. They are capable of flight, but often lands while engaging for increased accuracy and presicion.

*The model includes an alternate animation set in which it flies - you can use it with the storm crow ability, if you put the animation tag "alternateex" on the flying unit.

*The eyes and blue rings on its shell will glow in the dark. It is possible to alpha out the blue rings in the texture if you want to use this as a normal insect. The flying animations could fit a spellcaster unit.

*Comes with attachment points for both hands and feet, head, weapon and chest.

*No weapons are included, you will have to attach these yourself. Just base an ability off "sphere", change "art-target" to the weapon model path, attachment points to "hand, left" (or both hands, if you want to), and give it to the unit. I also have separate gunflash models which have instructions in their respective missile threads. Here is a list of weapons made to go with this:

UPDATE: Added origin and overhead attachments. The reason the two death sounds are different is obviously so that they would fit their respective animation. You cannot have a "thud" in an airborne explosion. They are both insect-like noises.