Maps 1
Hey, I just waited until someone has the idea I had months ago.

Anyway, fishbrains and my project hasn't come to an end and will never, so if you want you can look at it and maybe take some ideas.
I know the map sucks like its know, but it was pretty fun to fight with friends.

Just look at it and take what you want. I hope it helps.

how far is this map form being finished. and when are you releasing it?
also do you need any icons for your map
Last edited: May 15, 2008

Models 1
Right now I am just going back and deleting old hero spells and replacing them with new, complicated, trigger spells. I am just waiting on DK and Captain Olimar. Besides them the only hero who isn't' finished is cyndaquil/quilava/typhlosion.

Normally I would like icons, but the map can't fit much more.

Darebear010 said:
Right now I am just going back and deleting old hero spells and replacing them with new, complicated, trigger spells. I am just waiting on DK and Captain Olimar. Besides them the only hero who isn't' finished is cyndaquil/quilava/typhlosion.

Then what the hell is this nonsense with "Hey guys I'm quitting the map!?"

Edit: OH... that's someone ELSE'S project. My bad. And it's a shame to here that, sorry that it didn't go so well shell.[/OFFTOPIC]

Yeah, that sounds GREAT. Triggered spells=the shit. You my friend are really getting somewhere. If you want, since I haulted my Halo project (for now, it's not canceled!), I could do some terraining for you. I'm new to it, really, but I'm good at it. I don't use blizzard cliffs, I include height/tile variation, the whole shi-bang. Just offering, incase you want some help.

Models 1
Haha yea there is no way I would quit this project. All the time invested in it...
Well really all I need is more triggered spells. You are definitely right, they are way more interesting. As for the terain, I wouldn't want to waste your time, so don't do it for me. A footmen map is so simple that I think you would get bored.

Alright, fine, but if you change your mind... give me a hollar' and I'll see what I can do to "trick out" your map. And remember, footmen wars or not, nice, realistic terrain ALWAYS beats normal blizzard quality stuffs.

Models 1
Yea for sure. I don't doubt your ability, but I have several reasons not to fuss with the terrain. I'll delete old screen shots and take more of new abilities 'n stuff right now.

Models 2 Tutorials 1
If you're interested, I made a Fox McCloud model.

I still have to make the gun, finish skinning, and animate him.

I did a lot of work tonight though.
The WIP skin is looking good!

I know some people could use him, and you told me to inform you if I made any Smash characters.

Not bad. Give him his laser gun, and I'll be happy.

Models 2 Tutorials 1
Thanks. I'm going to make the gun last.

That's hot. You gonna animate it?

Models 1
Hey that looks really good! I just got back from vacation, so I'm ready to start working on this project again. I would love to use Fox, send me him when he's done.

You know... my avatar gives me an idea. Make an ability where, when cast, Luigi takes a huge gun mounted on his pelvis and BLOWS THE ENEMY AWAY! with a pelvic thrust.

Skins 1 Maps 1
That would indeed be quite epic

I look forward to seeing this map completed, and that fox model is looking good!

Until then I'm out of work. I completed every single other hero. I'm done with triggered spells, almost every hero has at least one. Some heroes (like Samus) have 4 triggered spells. I guess I could make another race or two... or something...

so will your map be completely finished when you have the models.
and good job so far

Models 1
Well right now I'm making a chaos orc race (for lack of something better to do). I can actually finish and release version 1 as soon as I get the models.

ok. how big is the map (memory)
and if you are protecting it dont forget to make a backup copy

Models 1
Well it's not finished so the size of the map isn't final. Currently it's smaller than Star Wars footies and LOTR footies, so I'm doing just fine.

Some actual values would be lovely. I have good connection (Optimum Online @ US East) so I have no problem, unless there's some guy that lives in China or something that decides to play on US East.

This map looks like it's gonna kill!
I'd love to be able to try it once it's ready
keep up the good work

Models 2 Tutorials 1
I'm happy to hear about the progress

I'm in finalizing stage now seeing as how I finished the animations about 30 minutes ago.
After I add the portrait, fix the collisions, and add attachment points, I'll model the gun which should not take long at all.

Models 1
You're the best. I heard you're also helping work on Mewtwo. You've helped so much.

I'll remove my current Wolf model, and give Fox all of Wolf's old moves to save room for the new models.

The captain has been there since the beginning.
Last edited: May 29, 2008

Models 2 Tutorials 1
Well, I can't say who, but a really close friend requested Captain Falcon so he's most likely my next project.

After him I'll make Falco for fun, for whoever needs him. He'll just be an edit of my Fox model.

I only did the uvmap for the Mewtwo

Models 1
Wow I just saw the old beta version of this map I used like twice on the western portal. Someone hacked it, rigged it, and re-released it. I asked around and apparently people have been playing it. I didn't even have one single triggered spell. There were only 4 races...

Cons:
There are more than one version
People might judge my new one on the old crappy one

Darebear010 said:
Wow I just saw the old beta version of this map I used like twice on the western portal. Someone hacked it, rigged it, and re-released it. I asked around and apparently people have been playing it. I didn't even have one single triggered spell. There were only 4 races...

Cons:
There are more than one version
People might judge my new one on the old crappy one
Click to expand...

That's good news;
Just first off, make your own forums and assure people that the official versions will only be released there.

You may want to release a version without the newest race so you will be able to have a quick update with a new race and new models.
In this version, I would provide the link to the boards, state that it's official, and include that it will be updated.

Good news is people are playing a rigged version, which gets annoying, so you will have fans for your official version with no problem.

I'm sure you can out-due this guy easily, and I (and I hope the other modelers ) will be behind you 100% to make the map better than any other version.

By the way, was it protected?

Models 1
Yea, it was. I forget which one I used...
I'm supposedly going to get Mewtwo tomorrow.

Models 1
You know what bugs me? DK still isn't finished. I know it's not like I have a right to have him or anything, but he was promised over a month ago.

Maybe ES has alot of work to be done and what-not, and somehow felt Fox was of a higher priority.

Models 1
I'm talking about Murdermode's DK. He showed the first pictures of him to me over a month ago, and since then I've messaged him twice. The first time he said that he was almost done, and the second one he never responded to. I'm beginning to wonder if he will ever get finished.
He said he was only going to make the static model, too. No animations or anything.

EDIT: Also, if you make a rigged hero or unit, make sure Tabuu is in it, A.K.A. The guy in signature and avatar, as hes from Super Smash Bros. Brawl. And another suggestion, make Donkey Kong's channel animation where he pulls back his fist, and starts spinning it, or make it his ready animation.

Maps 3
I have this Caption falcon SKIN of the villiger man I made for my own purpose. it's kinda crappy and should only be a last resort so here it is if you want it.

Models 1
Mario 64 wtf did you post i dont get

Models 1
I'm trying to figure that out myself... If anyone who knows how to use it, please tell me how.

You have to export it out of MS3D to an MDL or MDX, then make changes, then it'll be finished.

I don't think he's animated it though. The model isn't high-grade material in my opinion.

Models 1
I figured that it was Milkshape so I downloaded the program to look at it. It looks really 2 dimensional, it doesn't have a skin, and there are no animations. He put it up so I can animate it but it looks to me like I would be animating a stick figure. 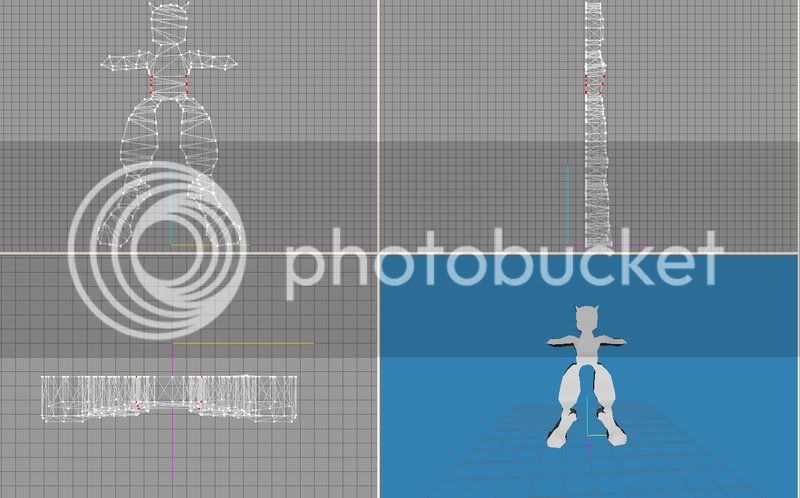 Skins 1 Tutorials 1
maybe you should look for models online and then convert them into wc3 model.

these are .Mb/3ds and properly without animations.. ( i think)

Icons 6 Skins 8
Well you have the basic out line I suppose try moving the vers around to make it more uhh 3dish.

Skins 1 Tutorials 1
yeah i would animate but i dont have time i just applied a shitty texture i made and posted it oh and to see the texture you must left click and then select texture and yes the model sucks really bad because it some of my first model and i didn't had any good side front reference picture to do it so i dont care if you dont like it.

Hey Darebear I got a question about your characters... do you even have Meta Knight or King Dedede ?

Anyways, mario_64, good luck trying to get your Mewtwo model finished and animated cause its looks really flat and shouldn't it have a tail too?

Also, darebear, hopefully you can get your map finished before mine

Models 1
I don't even have models for Dedede or Meta Knight or else I would put them in...

Models 2 Tutorials 1
I'll try to make a Mewtwo then, I guess.

The animating of that would be extremely hard.

today was the last day of school for me

Models 1
Lucky you. School ends on Wednesday for me.
Good luck with Mewtwo.
Is Fox done?

Models 2 Tutorials 1
Most of him his done, but I'm going to see if Lord_T can touch up the animations for me. I don't like the intervals that I set the animations at, so it'd take me some MDL editing to get them looking decent.

I'm going to send the model over to Lord_T and then I'm going to start on Captain Falcon.
I am very thankful that Lord_T is doing this for me